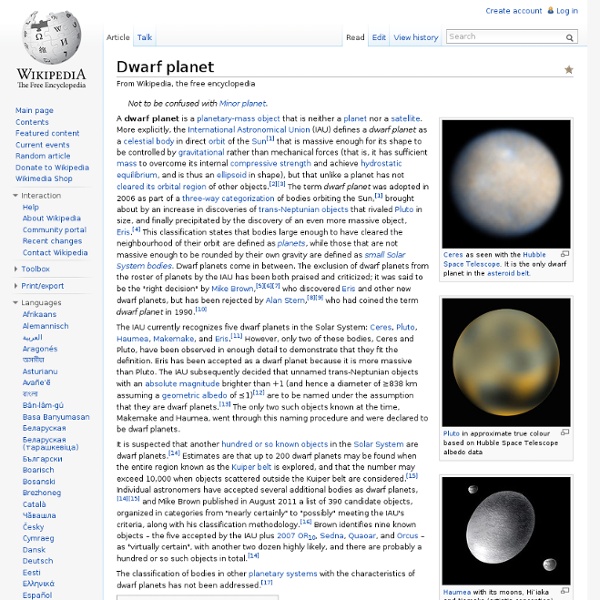 Pluto in approximate true colour based on Hubble Space Telescope albedo data A dwarf planet is an object the size of a planet (a planetary-mass object) but that is neither a planet nor a moon or other natural satellite. More explicitly, the International Astronomical Union (IAU) defines a dwarf planet as a celestial body in direct orbit of the Sun[1] that is massive enough for its shape to be controlled by gravity, but that unlike a planet has not cleared its orbit of other objects.[2][3] However, only two of these bodies, Ceres and Pluto, have been observed in enough detail to demonstrate that they actually fit the IAU's definition. The classification of bodies in other planetary systems with the characteristics of dwarf planets has not been addressed.[17] History of the concept[edit] The IAU's final Resolution 5A preserved this three-category system for the celestial bodies orbiting the Sun. Name[edit] Characteristics[edit] *ME in Earth masses. Orbital dominance[edit] Size and mass[edit]

Eris (dwarf planet) Eris (minor-planet designation 136199 Eris) is the most-massive known dwarf planet in the Solar System and the ninth-most-massive body known to directly orbit the Sun.[d] It is estimated to be 2,326 (±12) km in diameter,[9] and 27% more massive than Pluto, or about 0.27% of the Earth's mass.[10][17] Routine observations were taken by the team on October 21, 2003, using the 1.2 m Samuel Oschin Schmidt telescope at Mount Palomar Observatory, California, but the image of Eris was not discovered at that point due to its very slow motion across the sky: The team's automatic image-searching software excluded all objects moving at less than 1.5 arcseconds per hour to reduce the number of false positives returned. When Sedna was discovered, it was moving at 1.75 arcsec/h, and in light of that the team reanalyzed their old data with a lower limit on the angular motion, sorting through the previously excluded images by eye. Distribution of trans-Neptunian objects

Pluto In 2015, the Pluto system is due to be visited by spacecraft for the first time. The New Horizons probe will perform a flyby during which it will attempt to take detailed measurements and images of the plutoid and its moons. Discovery Discovery photographs of Pluto In the 1840s, using Newtonian mechanics, Urbain Le Verrier predicted the position of the then-undiscovered planet Neptune after analysing perturbations in the orbit of Uranus. In 1906, Percival Lowell, a wealthy Bostonian who had founded the Lowell Observatory in Flagstaff, Arizona in 1894, started an extensive project in search of a possible ninth planet, which he termed "Planet X".[25] By 1909, Lowell and William H. Tombaugh's task was to systematically image the night sky in pairs of photographs taken two weeks apart, then examine each pair and determine whether any objects had shifted position. Name The discovery made headlines across the globe. ), but has a circle in place of the middle prong of the trident ( Other factors

Ceres (dwarf planet) From Earth, the apparent magnitude of Ceres ranges from 6.7 to 9.3, and hence even at its brightest it is too dim to be seen with the naked eye except under extremely dark skies. Piazzi's book "Della scoperta del nuovo pianeta Cerere Ferdinandea" outlining the discovery of Ceres, dedicated the new "planet" to Ferdinand I of the Two Sicilies One of the astronomers selected for the search was Giuseppe Piazzi at the Academy of Palermo, Sicily. By this time, the apparent position of Ceres had changed (mostly due to the Earth's orbital motion), and was too close to the Sun's glare for other astronomers to confirm Piazzi's observations. The early observers were only able to calculate the size of Ceres to within about an order of magnitude. The name Ceres is pronounced /ˈsɪəriːz/ (SEER-eez).[24] The old astronomical symbol of Ceres is a sickle, 〈⚳〉 ( ),[27] similar to Venus's symbol 〈♀〉 but with a break in the circle, with a variant 〈 Ceres (bottom left), the Moon and the Earth, shown to scale

Haumea (dwarf planet) Two teams claim credit for the discovery of Haumea. Mike Brown and his team at Caltech discovered Haumea in December 2004 on images they had taken on May 6, 2004. On July 20, 2005, they published an online abstract of a report intended to announce the discovery at a conference in September 2005.[23] At around this time, José Luis Ortiz Moreno and his team at the Instituto de Astrofísica de Andalucía at Sierra Nevada Observatory in Spain found Haumea on images taken on March 7–10, 2003.[24] Ortiz emailed the Minor Planet Center with their discovery on the night of July 27, 2005.[24] Brown initially conceded discovery credit to Ortiz,[25] but came to suspect the Spanish team of fraud upon learning that his observation logs were accessed from the Spanish observatory the day before the discovery announcement. The proposal by the Ortiz team, Ataecina, did not meet IAU naming requirements, because Ataecina is not a creation deity.

Makemake (dwarf planet) Makemake (minor-planet designation 136,472 Makemake) is a dwarf planet and perhaps the largest Kuiper belt object (KBO) in the classical population,[nb 2] with a diameter that is about 2/3 the size of Pluto.[10][18] Makemake has no known satellites, which makes it unique among the largest KBOs and means that its mass can only be estimated. Its extremely low average temperature, about 30 K (−243.2 °C), means its surface is covered with methane, ethane, and possibly nitrogen ices.[15] Despite its relative brightness (it is about a fifth as bright as Pluto),[nb 3] Makemake was not discovered until well after many much fainter Kuiper belt objects. Most searches for minor planets are conducted relatively close to the ecliptic (the region of the sky that the Sun, Moon and planets appear to lie in, as seen from Earth), due to the greater likelihood of finding objects there. The provisional designation 2005 FY9 was given to Makemake when the discovery was made public.