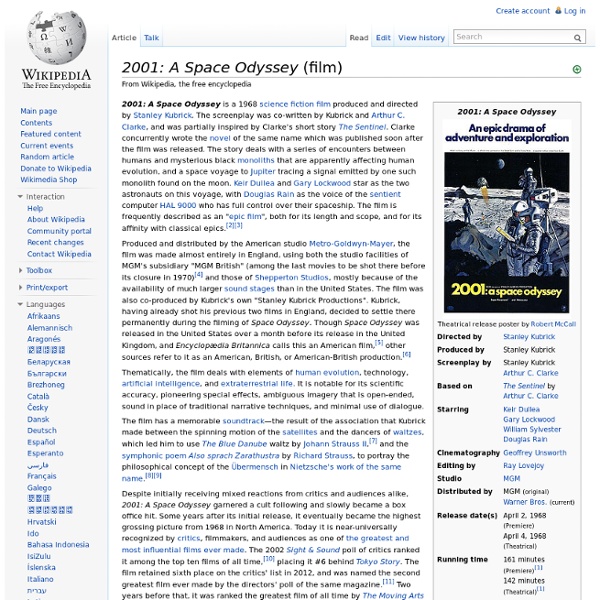 Produced and distributed by the U.S. studio Metro-Goldwyn-Mayer, the film was made almost entirely in England, using both the studio facilities of MGM's subsidiary "MGM British" (among the last movies to be shot there before its closure in 1970)[4] and those of Shepperton Studios, mostly because of the availability of much larger sound stages than in the United States. The film was also coproduced by Kubrick's own "Stanley Kubrick Productions". Kubrick, having already shot his previous two films in England, decided to settle there permanently during the filming of Space Odyssey. Though Space Odyssey was released in the United States over a month before its release in the United Kingdom, and Encyclopædia Britannica calls this an American film,[5] other sources refer to it as an American, British, or American-British production.[6] The film consists of four major sections, all of which, except the second, are introduced by superimposed titles. A Pan Am space plane carries Dr. Related:  SPACE TRAVEL

2001: A Space Odyssey Internet Resource Archive: The Special Effects of "2001: A Space Odyssey" Meanings: Special Effects The Special Effects of "2001: A Space Odyssey" By George D. DeMet Originallly published in DFX, July 1999 More than thirty years after its initial release, Stanley Kubrick's "2001: A Space Odyssey" still inspires those who see it. An epic story spanning both time and space, "2001" begins four million years ago, in a prehistoric African savanna, where mankind's distant ancestors must learn how to use the first tools in order to survive. Director Stanley Kubrick, who is also known for films such as "Dr. On the recommendation of Clarke, Kubrick hired spacecraft consultants Frederick Ordway and Harry Lange, who had assisted some of the major contractors in the aerospace industry and NASA with developing advanced space vehicle concepts, as technical advisors on the film. Every detail of the production design, down to the most insignificant element, was designed with technological and scientific accuracy in mind. Agel, Jerome, ed. Lightman, Herb.

The Underview on 2001: How Was It Done? In flat contradiction of what I have written elsewhere (that I rather like the mystery of not always knowing how clever effects are achieved), requests for explanations of some of the wholly convincing yet baffling scenes from "2001: A Space Odyssey" finally compel me to reveal a few secrets (with due respect to all those already in the know, who probably knew long before I did). If you think it will spoil your own enjoyment of the film, perhaps you should give this page a miss. I am alright, I kept my eyes closed while I wrote it. The genius of Stanley Kubrick is such that he and his visual effects specialists took such well- worn techniques as strings and mirrors to achieve the effects they wanted, but moved them to a whole new level of realisation (and you may be surprised at some of the people who laid the groundwork for such effects - see my "Extras" page); and if those methods were inadequate, they simply devised concepts all of their own. Below, you will find (some!) Home Page

Blast Off! 11 Novels of Space Exploration If you enjoy reading Electric Literature, join our mailing list! We’ll send you the best of EL each week, and you’ll be the first to know about upcoming submissions periods and virtual events. Space exploration has been in the news recently in a way it hasn’t in a number of years. That’s largely a result of the Elon Musk’s company SpaceX announcing detailed plans for a manned mission to Mars. Looking at detailed videos and images that explain how a trip to Mars could be accomplished, and how permanent human habitation might be implemented, a host of fictional treatments of the same subject come to mind. The Martian Chronicles, Ray Bradbury Ray Bradbury’s collection of stories set over several decades as humanity colonized Mars wasn’t the first book about humans exploring a new world, but the emotional and stylistic range contained within its pages is what makes it impressive. Nigerians in Space, Deji Bryce Olukotun Radiance, Catherynne M. Aurora, Kim Stanley Robinson Frank M.

Top 10 books about space travel | Samantha Cristoforetti | Books One of the funny little things I noticed after having lived in space for a while is that, contrary to everyday experience on Earth, it took some effort to keep my arms pressed against my body. Had I remembered better my childhood reading, I wouldn’t have been surprised. Jules Verne imagined this back in 1865. That wasn’t the first time literature imagined a trip to the moon: in Ludovico Ariosto’s Orlando Furioso (1516), the knight Astolfo flies to the moon in search of Orlando’s lost wits. Decades later, space travel became a reality. In fiction and in fact, these books seem truest to that extraordinary experience. 1. 2. 3. 4. 5. 6. 7. 8. 9. 10.

Galactic breaks speed of sound - News Today, Virgin Galactic, completed the first rocket-powered flight of its space vehicle, SpaceShipTwo (SS2). The test, conducted by teams from Scaled Composites (Scaled) and Virgin Galactic, officially marks Virgin Galactics entrance into the final phase of vehicle testing prior to commercial service from Spaceport America in New Mexico. The first powered flight of Virgin Spaceship Enterprise was without any doubt, our single most important flight test to date, said Virgin Galactic Founder Richard Branson, who was on the ground in Mojave to witness the occasion. For the first time, we were able to prove the key components of the system, fully integrated and in flight. Todays supersonic success opens the way for a rapid expansion of the spaceships powered flight envelope, with a very realistic goal of full space flight by the years end. The test began at 7.02am local time when SS2 took off from Mojave Air and Space Port mated to WhiteKnightTwo (WK2), Virgin Galactics carrier aircraft.