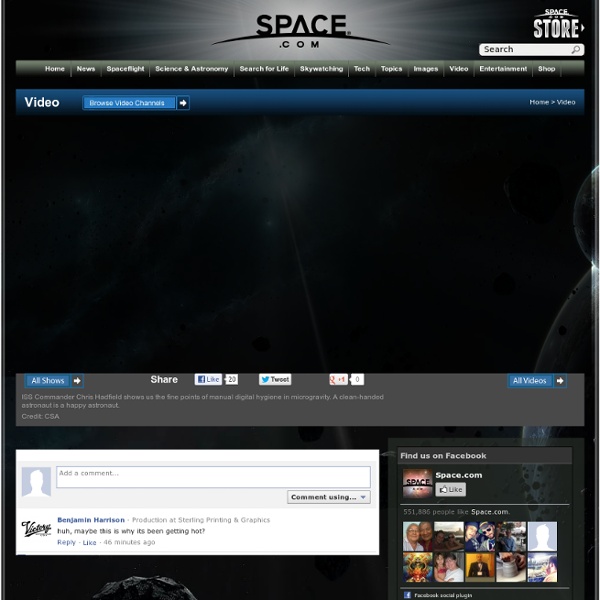 High Clouds Aloft High Clouds Aloft A Cassini spacecraft image captures a bright, oblong storm swirling high through the middle latitudes of the southern hemisphere. The image was taken through a spectral filter centered on wavelengths of light that are strongly absorbed by methane gas. Hence, any light making it through this filter to the camera's detector has bounced off clouds that are high in the atmosphere, making them visible, while light passing through the cloud-free surroundings gets absorbed by the methane gas there before it reaches the lower clouds. The image was taken with the Cassini spacecraft wide-angle camera on Jan. 5, 2009 using a spectral filter sensitive to wavelengths of near-infrared light centered at 890 nanometers. The Cassini-Huygens mission is a cooperative project of NASA, the European Space Agency and the Italian Space Agency. Credit: NASA/JPL/Space Science Institute

Asteroid Flyby; Watch Asteroid 2013 ET Buzz By Earth Live Online [LIVE STREAM] Asteroid 2013 ET will pass Earth on Saturday, (Photo: NASA) Like Us on Facebook Asteroid 2013 ET is about 210 feet by 460 feet (64 meters by 140 m) in size, with some astronomers comparing its width to a football field. The asteroid flyby will bring it about 2.5 times the moon's distance from Earth. With this latest asteroid flyby coming so close to a near-miss last month of Asteroid 2012 DA 14, which was only 17,000 miles from Earth. The last time an asteroid the size of asteroid 2013 ET hit the Earth was in 1908. "Those trees acted as markers, pointing directly away from the blast's epicenter," said Yeomans. Fortunately, this weekend's asteroid flyby will put it nowhere near a collision course with Earth. © 2012 iScience Times All rights reserved.

Top 10 Reasons Why the World Won't End in 2012 In the early days of computers, when hard drives weighed as much as a piece of furniture, a popular phrase was "Garbage-in, Garbage-out" (GIGO). It meant that computers would unquestioningly process the most nonsensical of input data and produce nonsensical output. "GIGO" describes the abysmal lack of intelligent thought and critical thinking on the Internet when it comes to all the hysteria about the end of the world coming on December 21, 2012, just in time to ruin Christmas. I'm getting e-mail about this weekly and I expect the nonsense to ratchet up. This latest installment in decades of flaky astronomical apocalypse predictions is loosely based on the Mayan calendar that marks the end of a 5,126-year era. Apparently the Mayans knew something about the heavens we don't, according to numerous hot-selling 2012 doomsday books on the market. The ten top 2012 doomsday scenarios: 10. So what else is new under the sun? 9. Don't hold you breath. 8. This isn't nearly as easy as tipping cows.

Lead page :: OceanLaw.org - Law of the Sea :: Security, Sovereignty & Sustainability The editorial below appeared on the Businessweek.com website on Thursday, October 6, 2011. October 05, 2011, 8:24 PM EDT By the Editors Oct. 6 (Bloomberg) -- The melting of Arctic ice as a result of global warming has set off a race to capitalize on the polar regionâ€™s suddenly accessible resources and expanding navigable waterways. Why? The area covered by Arctic ice today is about two-thirds its average size between 1979 and 2000. Plus, it is becoming increasingly feasible to ship goods out of and through the Arctic. Countries are lining up to get a piece of this potential bonanza. It is the Law of the Sea Convention that will determine who has the right to benefit from the Arcticâ€™s riches. The U.S. continental shelf off Alaska extends more than 600 miles into the Arctic Ocean. Submitted to the Senate both by Presidents Bill Clinton and George W. This is a nonsensical claim because a state could make that argument with or without the convention. --Editors: Lisa Beyer, Max Berley

LIVE REAL TIME SATELLITE AND SPACE SHUTTLE TRACKING AND PREDICTIONS Phys. Rev. D 87, 045024 (2013): Inhibition of the dynamical Casimir effect with Robin boundary conditions We consider a real massless scalar field in dimensions satisfying a Robin boundary condition at a nonrelativistic moving mirror. Considering vacuum as the initial field state, we compute explicitly the number of particles created per unit frequency and per unit solid angle, exhibiting in this way the angular dependence of the spectral distribution. The well-known cases of Dirichlet and Neumann boundary conditions may be reobtained as particular cases from our results. Interactive 3D model of Solar System Planets and Night Sky

Visualization of the Gödel universe - Abstract - New Journal of Physics The standard model of modern cosmology, which is based on the Friedmann–Lemaître–Robertson–Walker metric, allows the definition of an absolute time. However, there exist (cosmological) models consistent with the theory of general relativity for which such a definition cannot be given since they offer the possibility for time travel. The simplest of these models is the cosmological solution discovered by Kurt Gödel, which describes a homogeneous, rotating universe. Disregarding the paradoxes that come along with the abolishment of causality in such space–times, we are interested in the purely academic question of how an observer would visually perceive the time travel of an object in Gödel's universe. For this purpose, we employ the technique of ray tracing, a standard tool in computer graphics, and visualize various scenarios to bring out the optical effects experienced by an observer located in this universe.