Lethal Autonomous Weapons Systems. Described as the third revolution in warfare after gunpowder and nuclear weapons, lethal autonomous weapons (AWS) are weapon systems that can identify, select and engage a target without meaningful human control. 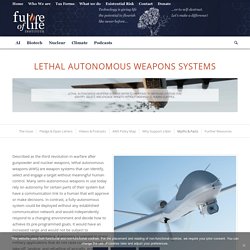 OpenAI Plays Hide and Seek…and Breaks The Game! □ Matt Langione: The promise of quantum computers. AI Alignment Podcast: On DeepMind, AI Safety, and Recursive Reward Modeling with Jan Leike. Benefits & Risks of Biotechnology. “This is a whole new era where we’re moving beyond little edits on single genes to being able to write whatever we want throughout the genome.” 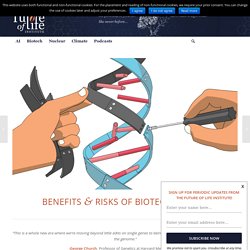 -George Church, Professor of Genetics at Harvard Medical School Click here to see this page in other languages: Japanese Russian. HUMANS NEED NOT APPLY. Empathic AI for smart mobility, media & technology. Neuroscience, AI and the Future of Education. Google's 'deceitful' AI assistant to identify itself as a robot during calls. Future - The increasingly realistic prospect of ‘extinct animal’ zoos. A traveller marvelling at snow leopards in a conservation park. 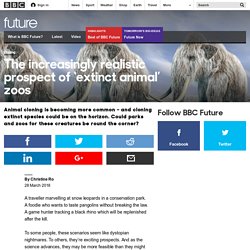 A foodie who wants to taste pangolins without breaking the law. A game hunter tracking a black rhino which will be replenished after the kill. I think the human race has no future if it doesn’t go to space. I have no fear of adventure. 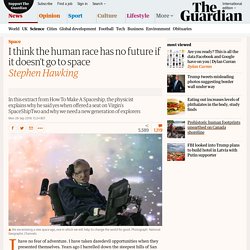 I have taken daredevil opportunities when they presented themselves. How the Uncanny Valley Works. It's the year 2053, and you're visiting the doctor's office. 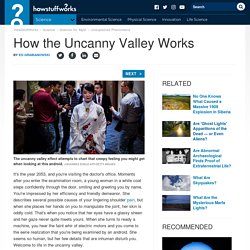 Moments after you enter the examination room, a young woman in a white coat steps confidently through the door, smiling and greeting you by name. You're impressed by her efficiency and friendly demeanor. She describes several possible causes of your lingering shoulder pain, but when she places her hands on you to manipulate the joint, her skin is oddly cold. Prisoners 'could serve 1,000 year sentence in eight hours'

"There are a number of psychoactive drugs that distort people’s sense of time, so you could imagine developing a pill or a liquid that made someone feel like they were serving a 1,000-year sentence," she said. 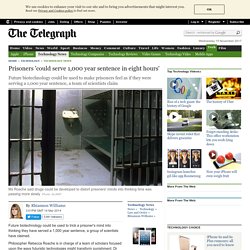 20 Crucial Terms Every 21st Century Futurist Should Know. This Might Be the Most Life-Like (And Creepiest) Robot Ever Built. Japan Just Birthed a New Life Form with this Robot. US military tests swarm of mini-drones launched from jets. Image copyright US Department of Defense The US military has launched 103 miniature swarming drones from a fighter jet during a test in California. 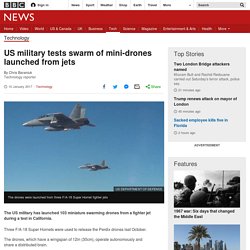 Three F/A-18 Super Hornets were used to release the Perdix drones last October. The drones, which have a wingspan of 12in (30cm), operate autonomously and share a distributed brain. A military analyst said the devices, able to dodge air defence systems, were likely to be used for surveillance. Microsoft Build 2017: Windows Moves Beyond the PC. When Microsoft brought its Office suite to Apple's iPad in 2014, many observers viewed it as a move to strengthen the company's presence in the mobile space — even if it meant working with a fierce rival. 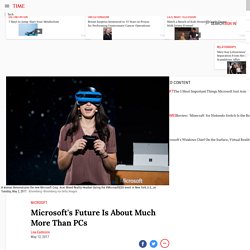 It was also a sign that then-new CEO Satya Nadella was committed to extending his company's reach beyond laptops and desktops, where its Windows software already dominated the market (and still does.) Three years later, it's clear that Nadella remains committed to that plan. During this week's Build conference, an annual Microsoft event for software developers, the Redmond, Wash. -based firm showed off a new version of Windows, a new controller for virtual reality experiences, and improvements for its Cortana artificial intelligence software. Yes, Microsoft missed the boat on mobile. The 5 Virtual Reality Experiences to Try on Your Phone. Lego professor of play: apply now for the most coveted job in education. There are only three days left to apply for what could be the most coveted job in education: the Lego professor of play, development and learning at the University of Cambridge. 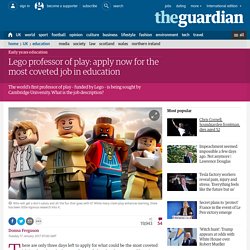 The closing date for applications for the brand new, permanent post is this Friday, 20 January. The successful candidate will not only enjoy all the perks of a typical Cambridge professor – including a job that commands an average salary of £83,981 – he or she will also lead Cambridge’s newly established Centre for Research on Play in Education, Development and Learning (Pedal). “The value of play is relatively under-researched,” says Prof Anna Vignoles, interim director of Pedal and a member of Cambridge University’s faculty of education. Leverhulme Centre for the Future of Intelligence. Future of Humanity Institute. Artificial Intelligence @ MIRI. Machine Intelligence Research Institute - Wikipedia. The Machine Intelligence Research Institute (MIRI), formerly the Singularity Institute for Artificial Intelligence (SIAI), is a non-profit organization founded in 2000 to research safety issues related to the development of Strong AI. 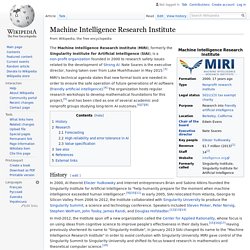 Nate Soares is the executive director, having taken over from Luke Muehlhauser in May 2015.[3] MIRI's technical agenda states that new formal tools are needed in order to ensure the safe operation of future generations of AI software (friendly artificial intelligence).[4] The organization hosts regular research workshops to develop mathematical foundations for this project,[5] and has been cited as one of several academic and nonprofit groups studying long-term AI outcomes.[6][7][8] History[edit] Whereas the short-term impact of AI depends on who controls it, the long-term impact depends on whether it can be controlled at all. [...]

Research[edit] Forecasting[edit] Congratulations! Delft Hyperloop Wins SpaceX Hyperloop Pod Competition. Yet another dreamteam has shown the world the innovative and technical strengths of the students of TU Delft. The Delft Hyperloop team won the Space X Hyperloop competition last weekend. Congrats guys! 29 teams from all over the world participated in the competition held by Elon Musk. MIT Hyperloop test 29 January 2017. Pod pride. After nearly 18 months of preparation, a UCI student team put up its sleek, high-tech HyperXite “pod” vehicle against entries from 27 other teams from around the world at the Hyperloop Pod Competition, held the last week of January at SpaceX headquarters in Hawthorne. The Anteaters didn’t bring home any awards, but that wasn’t the point. The prototype pods on display revealed fantastic possibilities for the Hyperloop, a futuristic transportation system proposed in 2013 by Elon Musk, CEO of SpaceX and Tesla.

He envisions pill-shaped vessels carrying passengers through an elevated near-vacuum tube at speeds in excess of 700 mph. If realized, the Hyperloop could shuttle people between Los Angeles and the San Francisco Bay Area in less than an hour. Facebook’s Internt.org Connects Over 40 Million People Globally. #Fb #MarkZuckerberg – Facebook’s Internt.org Connects Over 40 Million People Globally : As the likes of Samsung, HTC and Apple ponder on what could really be the reason for their dwindling returns, Facebook is over the moon thanks to impressive figures that the company released during its recent Q3 2016 earnings call.

Apple is not enjoying the smartphone market at all, something that has been on for quite some time now. The story is the same for Samsung, especially after the South Korean tech giant suffered what could be the greatest setback in their history with the failed Galaxy Note 7. Inside Facebook’s Ambitious Plan to Connect the Whole World. Facebook takes flight. At 2AM, in the dark morning hours of June 28th, Mark Zuckerberg woke up and got on a plane. Blue Origin, the space company owned by Jeff Bezos, is a lot like Amazon (AMZN) was in 1994 — Quartz. Singularity: The robots are coming to steal our jobs. Image copyright Thinkstock. Technological singularity. Conscious. Singularity Summit - Wikipedia. The Singularity Summit is the annual conference of the Machine Intelligence Research Institute. It was started in 2006 at Stanford University[1][2] by Ray Kurzweil, Eliezer Yudkowsky, and Peter Thiel, and the subsequent summits in 2007, 2008, 2009, 2010, and 2011 have been held in San Francisco, San Jose, New York City, San Francisco, and New York, respectively.