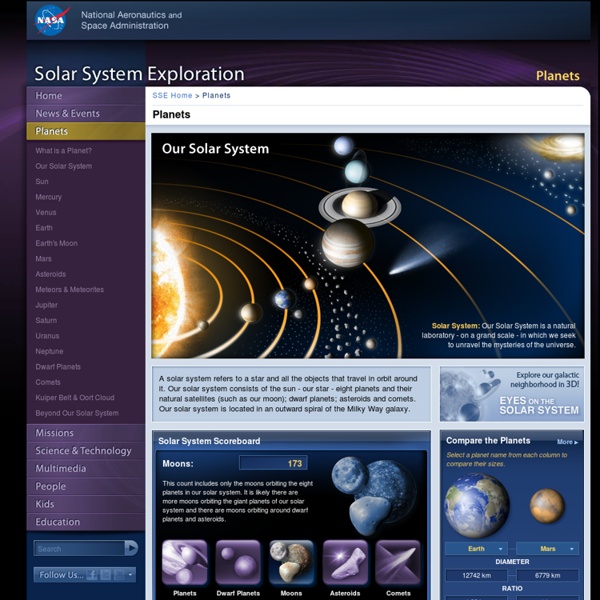 Planets: The planet count in our solar system has gone as high as 15 before new discoveries prompted a fine tuning of the definition of a planet. The most recent change was in 2006 when scientists reclassified Pluto as a new kind of object - a dwarf planet. Dwarf Planets: This new class of worlds helps us categorize objects that orbit the Sun but aren't quite the same as the rocky planets and gas giants in our solar system. There could be hundreds more of these small worlds far out there waiting to be discovered. Moons: This count includes only the moons orbiting the eight planets in our solar system. Asteroids: New asteroids are discovered on an almost daily basis. Comets: Orbiting spacecraft such as SOHO have raised this tally in recent years by catching the comets as they plunge toward the Sun - and sometimes vaporize.

Video: NASA's New Upper Stage J-2X Engine Passes Major Test NASA conducted a successful 500-second test firing of the J-2X rocket engine on Wednesday, Nov. 9, marking another important step in development of an upper stage for the heavy-lift Space Launch System (SLS). SLS will carry the Orion spacecraft, its crew, cargo, equipment and science experiments to destinations in deep space. SLS will be safe, affordable and sustainable to continue America's journey of discovery from the unique vantage point of space. "The J-2X engine is critical to the development of the Space Launch System," Dan Dumbacher, NASA's deputy associate administrator for exploration systems development, said after the test at NASA's Stennis Space Center in Mississippi.

Canberra Deep Space Communication Complex - NASA's Deep Space Network Come and make your own space discoveries at the Canberra Deep Space Communication Complex Education Programs The Canberra Space Centre (CSC) offers an informative and enjoyable way to learn about the planets and the story of space travel; and how we here on Earth communicate with and benefit from spacecraft exploring our Solar System and beyond. The CSC is open to the general public and the exhibits and displays offer a self-guided education experience for children and adults. Two theatres continuously screen films on space exploration and the latest science results from deep space.

Scientist Claims Our Solar System Evicted A Planet So Earth Could Survive Colorado scientist David Nesvorny was running solar system evolutionary simulations recently when he realized that during 6,000 different simulations the Earth couldn’t survive during the system’s early years based on the current planetary count. Once Nesvorny added another planet to the system however Earth survived as expected. According to his work our solar system at one point had a ninth planet, a gas giant that was nudged out of the system billions of years ago to make room for Earth’s survival. According to the Mother Nature Network “gas giant number five” started off bound together with Saturn and Jupiter and pushed out lighter planets including Neptune and Uranus eventually to be pushed out of the system on its own after a collision with Jupiter. According to his work David said the planet was likely orbiting about 15 times further from the sun than our own planet.

Our Solar System Solar System Heliophysics Studying the Sun-Earth connection. ›Read More NASA Snaps the First 360-degree Image of the Sun - Technology News by ExtremeTech A little more than four years ago, NASA launched a twin pair of spacecraft as part of their STEREO (Solar TErrestrial RElations Observatory) mission. The crafts traveled in opposite directions along the Earth’s orbit en route to positions on opposite sides of the sun. This past Sunday the two crafts reached their respective destinations and—for the first time—captured a 360-degree view of our local celestial heavy. Download (free) Amazing Space! Student Newsletters : Nightskyonline.info You can download a free ‘Amazing Space!’ student newsletter for each term. The newsletter’s content will vary but currently includes finder charts for planets visible to the unaided eye (in the early evening sky), where to look for easily recognisable constellations and Moon phases for the months of that term. Potential uses for the newsletter include sending it home as extension (fun) homework for students or enlarging it and placing it on your classroom wall for students to use.

Planetary Transits Page Transit of Mercury on 1973 Nov 10. The transit or passage of a planet across the disk of the Sun may be thought of as a special kind of eclipse. As seen from Earth, only transits of the inner planets Mercury and Venus are possible. Planetary transits are far more rare than eclipses of the Sun by the Moon. On the average, there are 13 transits of Mercury each century. Power Book This is a versatile yet easy to use and configure AS3 Flip Book application – XML driven You can create all your pages directly from the XML , loading their background and content from external images or swf files, add text with links, add a background music, contact and share windows, create a summary, load multiple books... and much more! You can add as many pages and books as you want, and there are so many options you can easily set to configure your book content and appearance. VERSION : 1.30 [ SWF + SWC + Standalone app (mac&win) ] [ AS3 – Flash player 10 – FLA : Flash CS4 + CS5 ] DEMO SONG : Passing By (you need to buy it from AudioJungle if you want to use it in your books)

StarChild: The Solar System The Solar System Listen to an audio version of this page. Solar System Activities The StarChild site is a service of the High Energy Astrophysics Science Archive Research Center (HEASARC), Dr. Planets Planets PLANETS: New Worlds, New Discoveries NASA is at the leading edge of a journey of scientific discovery that promises to reveal new knowledge of our Solar System’s content, origin, evolution and the potential for life elsewhere. NASA Planetary Science is engaged in one of the oldest of scientific pursuits: the observation and discovery of our solar system’s planetary objects. With an exploration strategy based on progressing from flybys, to orbiting, to landing, to roving and finally to returning samples from planetary bodies, NASA advances the scientific understanding of the solar system in extraordinary ways, while pushing the limits of spacecraft and robotic engineering design and operations. Since the 1960s, NASA has broadened its reach with increasingly sophisticated missions launched to a host of nearby planets, moons, comets and asteroids.