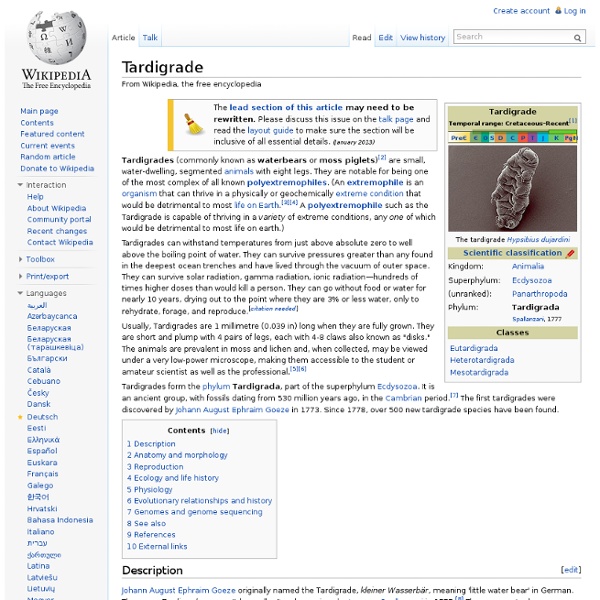 Tardigrades (also known as waterbears or moss piglets)[2][3][4] are water-dwelling, segmented micro-animals, with eight legs.[2] They were first described by the German pastor Johann August Ephraim Goeze in 1773. The name Tardigrada (meaning "slow stepper") was given three years later by the Italian biologist Lazzaro Spallanzani.[5] Since 1778, over 1,150 tardigrade species have been identified. Tardigrades are classified as extremophiles, organisms that can thrive in a physically or geochemically extreme condition that would be detrimental to most life on Earth.[6][7][3] For example, tardigrades can withstand temperatures from just above absolute zero to well above the boiling point of water, pressures about six times greater than those found in the deepest ocean trenches, ionizing radiation at doses hundreds of times higher than the lethal dose for a human, and the vacuum of outer space. Tardigrades form the phylum Tardigrada, part of the superphylum Ecdysozoa. Description[edit]

Micro-animal Micro-animals are animals that are microscopic and thus cannot be seen with the naked eye and can only be observed under a microscope. Mostly these microorganisms are multicellular but none are vertebrates. Microscopic arthropods include dust mites, spider mites, and some crustaceans such as copepods and the cladocera. Another common group of microscopic animals are the rotifers, which are filter feeders that are usually found in fresh water. The NeverEnding Story (film) The book describes the fantasy world of Fantasia which is being threatened by a force called "The Nothing," a void of darkness that consumes everything. The Childlike Empress (Tami Stronach), who rules over Fantasia from the Ivory Tower, has fallen ill due to the Nothing, and she has summoned Atreyu (Noah Hathaway), a young warrior from the Plains People, to discover the means to end the Nothing. Atreyu is given AURYN, a medallion to protect and guide him. As Atreyu sets out, the Nothing summons Gmork (voiced by Alan Oppenheimer), a vicious, but highly intelligent werewolf, to kill Atreyu. Atreyu's quest directs him to an ancient being called Morla that resides in the Swamps of Sadness. Atreyu attempts to trek through the Swamps but even AURYN cannot protect him indefinitely. The two try to locate the boundary of Fantasia, but the power of the Nothing has grown, and Atreyu is knocked from Falkor's back into the Sea of Possibilities, losing AURYN in the process. Notes

1:Face Charity Watch | Changing the world 1:Face at a time List of Doctor Who items This is a list of items from the BBC television series Doctor Who, as well as its spin-offs Torchwood and The Sarah Jane Adventures. 0–9[edit] 2dis[edit] 3-D glasses[edit] Anaglyphic 3D glasses are used as detectors for radiation created by the Void in the world of Doctor Who The Tenth Doctor used red blue anaglyphic 3D lenses to examine the Void ship and the "ghosts" in "Army of Ghosts". The Doctor couldn't help but joke that with the glasses on, it was the first time Jackie Tyler didn't look normal to him; everyone else had Void Stuff on them. 500 year diary[edit] 900 year diary[edit] 1200 year diary[edit] Seen in a Doctor Who documentary to celebrate the 50th anniversary. 2000 year diary[edit] Seen in "The Girl Who Died", the Twelfth Doctor has a diary. A[edit] Anti-oil[edit] A red coloured liquid used to clog machinery or gears - "if it moves, it doesn't" the Doctor would explain. Anti-plastic[edit] Anti-Regeneration Gun[edit] Archangel Network[edit] Astral Map[edit] Atom Accelerator[edit] B[edit]

Jason's Molecule Tiny Homes I featured Jason’s first Molecule tiny house a while back and Jason has been very busy designing and building more tiny homes. I thought you might enjoy an update. Built this year, all new construction. This tiny house is 8 ft. 6 in. wide by 20 ft. long by 13 ft. 5 in. high. Including the porch and lofts it is approximately 260 square feet. The home features a full kitchen, including three burner range and oven, and a full bathroom with shower and tub. To view more pictures and all of Jason’s Molecule Tiny Homes and his pricing visit Other amenities like fold down “Murphy” style bed on the ground level with convertible fold up writing desk, and washer dryer hookups are available if desired. The Surf Shack Jason says, “This house was custom built for a surfer. Check out all of Jason’s Molecule Tiny Homes and pricing at

Ponderings of a Priest