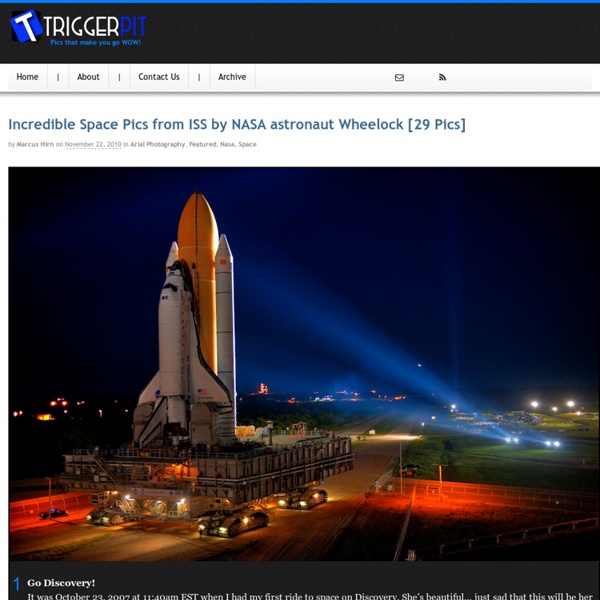 Go Discovery! It was October 23, 2007 at 11:40am EST when I had my first ride to space on Discovery. She’s beautiful… just sad that this will be her last voyage. Looking forward to climbing aboard the flight deck when Discovery arrives at the Space Station in November. (9-23-2010). Incredible Photos from Space: Larry Tanner, NASA. Special thanks: Bethbeck’s blog On September 22, 2010, with the departure of the Expedition 23 crew, Colonel Douglas H. We thought that we should put some of the space photos together as a tribute to him and the whole ISS crew. The following space photos are all visible on Astro_Wheels’ twitpic account, and we are eternally grateful to him for sharing these space photos with the world. Incredible Photos from Space: ‘Earthshine’… The Space Station basking in blue Earthshine as the rising sun pierces our razor-thin atmosphere to cover the Space Station with blue light. NASA astronaut Douglas H.

Strange massive tear in the solar surface- Earth quivers So, if this mystery object which is much larger than a comet – supposedly several times the size of the earth – were to come into range of the sun to be incinerated, would it not produce pretty much the larger ‘holes’ that we see here? Could NONE of it really be left? I notice that all the talk of Planet X has ceased. NASA ‘they say’ mentioned this object, and then disavowed having mentioned it. Maybe there is a news blackout? (That sort of claim appears often on shrill internet sites – claims like “Oh see this video, it was suppressed on the Discover channel because of politics,” when I saw that video on the Discover channel around 2003.)

The History of the Universe in 200 Words or Less Quantum fluctuation. Inflation. Expansion. Strong nuclear interaction. Awesome pictures from around the world Someone sent me these in a chain email, it was horribly formatted. I also do not know who made the comments, or how accurate they are. I take zero credit in the pictures, I just wanted to compile them nicely for all to see. The world’s highest chained carousel, located in Vienna, the height of 117 meters. Thor’s Well – “the gates of the dungeon.” Saturn Moon Has Oxygen Atmosphere An oxygen atmosphere has been found on Saturn's second largest moon, Rhea, astronomers announced Thursday—but don't hold your breath for colonization opportunities. For one thing, the 932-mile-wide (1,500-kilometer-wide), ice-covered moon is more than 932 million miles (1.5 billion kilometers) from Earth. For another, the average surface temperature is -292 degrees Fahrenheit (-180 degrees Celsius). And at less than 62 miles (100 kilometers) thick, the newfound oxygen layer is so thin that, at Earthlike temperatures and pressure, Rhea's entire atmosphere would fit in a single midsize building. Still, the discovery implies that worlds with oxygen-filled air may not be so unusual in the cosmos. (Related: "Potentially Habitable Planets Are Common, Study Says.")

Photos of Sakurajima volcano 25 Feb 2010 On a recent visit to Japan, alien landscape photographer Martin Rietze captured some spectacular images of Sakurajima volcano in Kagoshima prefecture. Multiple lightning flashes caused by fast moving fine ash Scientific shifts go beyond the zodiac By Alan Boyle, Science Editor, NBC News It seems that the world was shocked to learn this week that astrology no longer reflects astronomical realities. But such shifts are merely part of the routine in a changing universe. They don't always come to our attention, but they can make more of a difference in your daily life than your horoscope. Parke Kunkle, an astronomer who teaches at Minneapolis Community and Technical College, set off an Internet-wide viral buzz when the Star-Tribune published his observation that the constellations don't match the traditional astrological signs.

StereoMan » Hubble photos 4/26/2010 M64 “Black Eye” Galaxy click the picture 17 million light-years from Earth lies Messier 64, otherwise known as the Black Eye Galaxy, or Sleeping Beauty. Discovered in 1779 by Edward Pigott, astronomers thought for centuries that it was a fairly ordinary spiral galaxy. But recent observations, including those of the Hubble telescope, have revealed something truly extraordinary about M64.

"Page One" Story of the Century? NASA May Announce Thursday to Have Found Life on Saturn's Moon Titan NASA has called a 2 p.m. news conference for Thursday "to discuss an astrobiology finding that will impact the search for evidence of extraterrestrial life." The group includes Pamela Conrad, author of a paper on geology and life on Mars; and James Elser, an Arizona State University professor involved in a NASA-funded program that emphasizes looking at the chemistry of environments where life evolves (and not just looking at water or carbon or oxygen); Felisa Wolfe-Simon (an oceanographer) has written extensively on photosynthesis using arsenic recently (she worked on the team mentioned in this article); Steven Benner (a biologist) is on the "Titan Team" at the Jet Propulsion Laboratory; they're looking at Titan (Saturn's largest moon) as an early-Earth-like chemical environment. This is likely related to the Cassini mission. The space agency did not release more details, but the list of news conference participants is telling, according to blogger Jason Kottke. Casey Kazan via Kotte.org