UK nuclear spacecraft could halve time of journey to Mars. British spacecraft could travel to Mars in half the time it now takes by using nuclear propulsion engines built by Rolls-Royce under a new deal with the UK Space Agency. 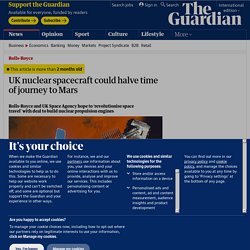 The aerospace company hopes nuclear-powered engines could help astronauts make it to Mars in three to four months, twice as fast as the most powerful chemical engines, and unlock deeper space exploration in the decades to come. The partnership between Rolls-Royce and the UK Space Agency will bring together planetary scientists to explore how nuclear energy could be used to “revolutionise space travel”, according to the government. Dr Graham Turnock, the chief executive of the UK Space Agency, said using nuclear power in space was “a gamechanging concept that could unlock future deep-space missions that take us to Mars and beyond”. Serendipitous Juno Spacecraft Detections Shatter Ideas About Origin of Zodiacal Light. An illustration shows NASA’s Juno spacecraft as it entered orbit of Jupiter on July 4, 2016, after traveling for nearly five years and more than 1.7 billion miles. 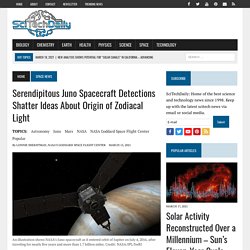 Credit: NASA/JPL/SwRI Data from the NASA spacecraft’s journey to Jupiter suggests that Mars may be shedding dust into interplanetary space. Look up to the night sky just before dawn, or after dusk, and you might see a faint column of light extending up from the horizon. That luminous glow is the zodiacal light, or sunlight reflected toward Earth by a cloud of tiny dust particles orbiting the Sun. Three entirely new lifeforms discovered on space station. Three new lifeforms have been discovered in different locations on the International Space Station (ISS), potentially offering researchers a new way to grow food in space. 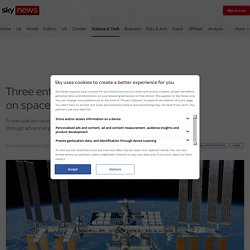 American and Indian scientists have examined four bacterial strains from the station and found that the three belonged to a species previously unknown to science. Newly discovered galaxy 'defies understanding', say astronomers. A newly discovered galaxy "defies understanding" according to astronomers, mysteriously appearing to be surprisingly mature despite dating back to the early years of the universe. 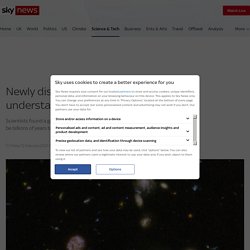 Named ALESS 073.1, the galaxy formed just 1.2 billion years after the Big Bang occurred 13.7 billion years ago, but because it is so far away from Earth the light is now reaching us showing us what it looked like billions of years ago. Astronomers from Cardiff University have been baffled by what they've seen, with Dr Federico Lelli saying: "We discovered that a massive bulge, a regular rotating disk, and possibly spiral arms were already in place in this galaxy when the universe was just 10% of its current age.

" "This galaxy looks like a grown adult, but it should be just a little child," Dr Lelli added. One of the key features of what were previously believed to be mature galaxies was the bulge in their centre where stars became tightly packed due to gravity. Earth-Skimming Meteor May Have Brought Life to Venus, Harvard Researchers Say. Meteors that grazed Earth’s atmosphere could have brought microbial life from Earth to Venus, Harvard Astronomy department chair Avi Loeb and College student Amir Siraj ’22 hypothesized in a new research study, made available in preprint last week. 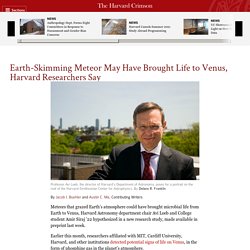 Earlier this month, researchers affiliated with MIT, Cardiff University, Harvard, and other institutions detected potential signs of life on Venus, in the form of phosphine gas in the planet’s atmosphere. With corrosive droplets of sulfuric acid in its atmosphere and surface temperatures surpassing 800 degrees Fahrenheit, Venus appears an unlikely candidate for extraterrestrial life. This led Loeb and Siraj to question whether any potential Venusian life might not really be alien after all; rather, it could have come from life on Earth. Student Project: Make a Moon Phases Calendar and Calculator âÂ NEW for 2021.

Explore With Curiosity: Mars Surface Experience. Mars to Earth: How to send HD video between planets. A Decade of Sun. Can we see stars outside our Milky Way? Photo at top of post by Jeff Dai in Tibet. 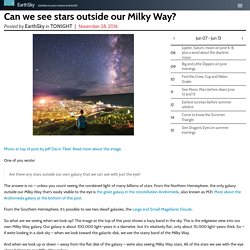 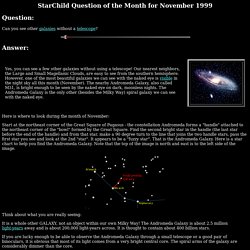 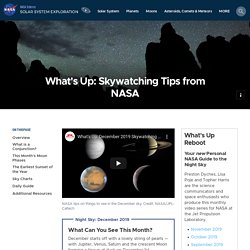 Venus, Saturn, the crescent Moon and Mars make close passes at dusk and dawn throughout the month. On December 1st, Jupiter, Venus, Saturn and the crescent Moon form a lineup at dusk. You'll need a pretty clear view toward the horizon to see Jupiter, which is setting soon after the Sun these days. What is Artemis? Scientist Explains How Moon Mining Would Work. Gravitational anomaly discovered weighing down surface of moon. A large gravitational anomaly has been discovered beneath the surface of the moon by researchers at Baylor University in Texas. 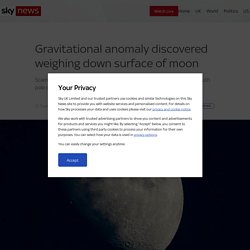 The anomaly was discovered when the scientists measured subtle changes in the strength of gravity around the moon, analysing data collected from NASA missions. Researchers suspect it may be caused by a mass of metal which originated from deep space being buried beneath the moon's surface and weighing it down. "Imagine taking a pile of metal five times larger than the Big Island of Hawaii and burying it underground," said the study's lead author Dr Peter James. Moon to reveal secrets of the infant Universe. The Royal Astronomical Society. New Documentary Explores Minds of Einstein and Hawking March 10 (Video) If there is a pantheon for great minds, Stephen Hawking and Albert Einstein would undoubtedly qualify for membership. 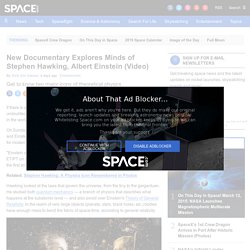 Their remarkable theories were transformative in the world of physics, and both are lauded as luminaries across the world. On Sunday, a new 2-hour program will delve into the fascinating work of Hawking and Einstein, how their ideas are connected, and what that fruitful pondering means for modern physics. Mark Your Calendars for These Space Events in 2019. For those who contemplate the cosmos, 2019 already is shaping up to be a pretty spectacular year. On Jan. 1, NASA's New Horizon's spacecraft flew by Ultima Thule, an object in the Kuiper Belt some 4 billion miles (6.4 billion kilometers) from Earth, and sent back pictures of a bizarre miniature world shaped like a bowling pin. In the days and months ahead, we'll be gazing in wonder at more images and other data from New Horizon, as it continues its exploration of that mysterious realm, which may contain secrets about the origin of the solar system.

Not quite two days later, a Chinese probe, Chang'e-4, became the first spacecraft to ever land on the far side of the moon. But that was just the start. Here are some of the key events, from meteor showers to space exploration milestones, that we can expect this year. Jan. 20-21: Total Lunar Eclipse The moon will pass through Earth's umbra, the inside region of its shadow, over a five-hour period, Sky and Telescope reports.

June: U.S. Winter of Moon - Sciences. Does The Moon Rotate? Does the Moon Rotate? Observers on Earth might notice that the moon essentially keeps the same side facing our planet as it passes through its orbit. This may lead to the question, does the moon rotate? The answer is yes, though it may seem contrary to what our eyes observe. The moon orbits the Earth once every 27.322 days. It also takes approximately 27 days for the moon to rotate once on its axis. As a result, the moon does not seem to be spinning but appears to observers from Earth to be keeping almost perfectly still. 26. South Pole-Aitken Basin-Centered Maps. Clementine Explores the Moon Slide Index. Lunar and Planetary Institute. Universities Space Research Association.

China Launches 1st Mission to Land on the Far Side of the Moon. The first-ever surface mission to the far side of the moon is underway. China's robotic Chang'e 4 spacecraft streaked away from Earth today (Dec. 7), launching atop a Long March 3B rocket from the Xichang Satellite Launch Center at about 1:23 p.m. EST (1823 GMT; 2:23 a.m. on Dec. 8 local China time). If all goes according to plan, Chang'e 4 will make history's first landing on the lunar far side sometime in early January.

The mission, which consists of a stationary lander and a rover, will perform a variety of science work and plant a flag for humanity in a region that remains largely unexplored to date. [China's Moon Missions Explained (Infographic)] Blue Origin. SpaceX. Apollo 11 Landing Site From Dawn to Dusk - Moon: NASA Science. Atstrobiology News. I think the human race has no future if it doesn’t go to space. I have no fear of adventure. I have taken daredevil opportunities when they presented themselves.

Years ago I barrelled down the steepest hills of San Francisco in my motorised wheelchair. I travel widely and have been to Antarctica and Easter Island and down in a submarine. On April 26, 2007, three months after my sixty-fifth birthday, I did something special: I experienced zero gravity. Stephen Hawking's PhD thesis crashed its host website – here's what it says in simple terms. The PhD thesis of perhaps the world’s most famous living scientist, Professor Stephen Hawking, was recently made publicly available online. It has proved so popular that the demand to read it reportedly crashed its host website when it was initially uploaded.

But given the complexity of the topic – “Properties of Expanding Universes” – and the fact that Hawking’s book A Brief History of Time is also known as the most unread book of all time, you might benefit from a summary of its main result. The thesis covers several topics, including recently discovered gravitational radiation, but the final chapter is the part that many physicists consider the most significant. It deals with the birth of the universe itself, and is simply titled “Singularities”. Creation theories. Supermassive Black Hole Sagittarius A* Watch Blue Origin Fire Up Engine for Huge New Glenn Rocket (Video) 2017 Hubble Space Telescope Advent Calendar. Time once more for one of my favorite holiday traditions, the 10th annual Hubble Space Telescope Advent Calendar. Every day until Monday, December 25, this page will present one new incredible image of our universe from NASA's Hubble telescope. Exoplanet Exploration: Planets Beyond our Solar System: Strange New Worlds. The Disruptors - The new space race.

It’s a vision of a world in which low-cost satellites are carried on affordable rockets that launch when you want – all ordered at the click of a button with no need to wait for slow-moving government-funded space missions. Yet this latest space race also presents its own challenges, says Terrabotics’ Gareth Morgan. Mike Pence wants to see astronauts return to the Moon. Image copyright Reuters US Vice-President Mike Pence has expressed the intention for America to send humans back to the Moon's surface. In pictures: Astronomy Photographer of the Year 2017. Sync your calendar with the solar system - The New York Times.