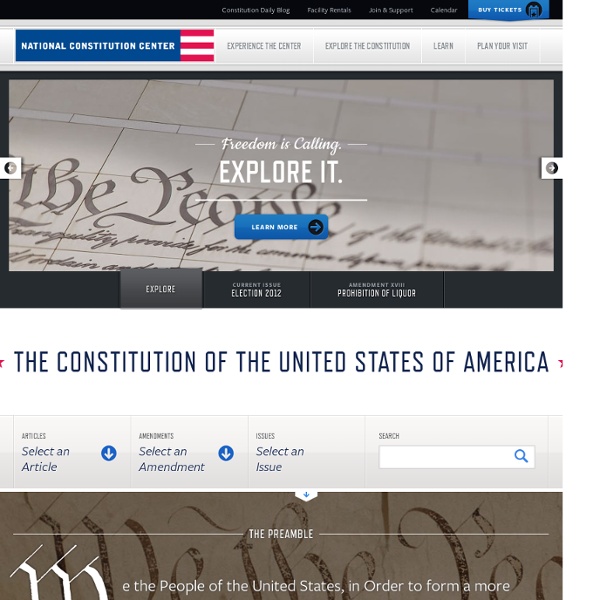 The Preamble e the People of the United States, in Order to form a more perfect Union, establish Justice, insure domestic Tranquility, provide for the common defence, promote the general Welfare, and secure the Blessings of Liberty to ourselves and our Posterity, do ordain and establish this Constitution for the United States of America.

Now’s the Time To End Tax Exemptions for Religious Institutions Mark Oppenheimer writes the biweekly “Beliefs” column for The New York Times and is editor-at-large for Tablet. He also reports for The Atlantic, The Nation, This American Life, and elsewhere. Two weeks ago, with a decision in Obergefell v. Hodges on the way, Sen. Mike Lee of Utah introduced the First Amendment Defense Act, which ensures that religious institutions won’t lose their tax exemptions if they don’t support same-sex marriage.

100 Useful Web Tools for Writers All kinds of writers, including poets, biographers, journalists, biz tech writers, students, bloggers and technical writers, take a unique approach to their jobs, mixing creativity with sustainability. Whether you’re a freelance writer just scraping by or someone with a solid job and more regular hours, the Internet can provide you with unending support for your practical duties like billing, scheduling appointments, and of course getting paid; as well as for your more creative pursuits, like developing a plot, finding inspiration and playing around with words. Turn to this list for 100 useful Web tools that will help you with your career, your sanity and your creativity whenever your write. Getting Organized Thanks to the Internet, disorganized writers are no longer a cliche. Keep track of appointments, interviews and deadlines with these handy web-based tools.

The Trump Resistance Plan: A Timeline – Russia and President Trump Of the Jan. 6, 2017, meeting, when Comey told Trump about the infamous Steele dossier, Trump said: “He shared it so that I would think he had it out there” as leverage against Trump. Of the Feb. 14, 2017, meeting, when Trump said he hoped Comey could see his way to “letting Flynn go,” Trump said: “He said I said ‘hope’ — ‘I hope you can treat Flynn good’ or something like that. I didn’t say anything. What you might not know about the 1964 Civil Rights Act It was known as the "bill of the century." But many Americans today probably couldn't say exactly what the legislation accomplished. "It's really the law that created modern America," said Todd S. 50 Of The Most Useful Websites On The Internet - WeHaveNoTopic There are many website to help us be productive. The problem is that you probably never heard of most of them. That’s why we made a list of 50 of the most useful websites on the internet! midomi.com Basically Shazam for PC. Play or sing a song and the site will know what song it is.WhatTheFont Upload an image of a font and this website tells you what font is used.chesscademy.com Learn chess on the internet.Mathway.com Solves any kind of math problem and also tells you how.Mailinator.com Disposable e-mail address. When you don’t want to receive spam.10minutemail.com Another disposable e-mail address.

9 of the Strangest and Loveliest Dioramas Ever While there are endless different kinds of dioramas, there is something that most all of them have in common: the strange beauty that comes from capturing our world in miniature, in exacting detail. Some of the most impressive examples of this craft are on display in museums around the globe, while others a bit more off the beaten path. From bizarre to beautiful, here are nine places to see these intricate three-dimensional snapshots of the world. 3 Republican Attacks on the Constitution If you’ve listened to conservative rhetoric throughout the Obama presidency, they’ve framed our commander-in-chief as an unpatriotic man trying to rip up the Constitution. Republicans, on the other hand, are the true defenders of the country’s founding documents, with the RNC’s whole platform being about “restoring” the Constitutional government. That sounds nice, but are the Republicans really the Constitution’s #1 fan? It seems like, given the opportunity, there are a number of things they’d like to edit out of the Constitution:

15 Famous Sculptures in History click 2x Lincoln Memorial, designed by Daniel Chester French & carved by the Piccirilli Brothers (1920) Originally designed to be 10 feet tall, this marble sculpture of the 16th president of the United States was enlarged to 19 feet from head to foot. It depicts Lincoln in contemplation, sitting inside the majestic temple structure that forms the rest of the Lincoln Memorial. From the 1930s, the space has gained importance as a symbol of race relations in the United States. Bird in Space by Constantin Brancusi (1923) New Analysis: 2016 Judicial Elections See Secret Money and Heightened Outside Spending Politicized and High-Dollar Races Threaten Fair and Impartial Courts In an election season that has seen an unprecedented blockade of President Obama’s Supreme Court nominee, Merrick Garland, it’s easy to overlook troubling developments for judicial selection at the state court level, where 95 percent of all cases are heard. In total, 39 states hold elections to choose all or some of their judges. This November, 27 states will hold elections for seats on their highest courts.