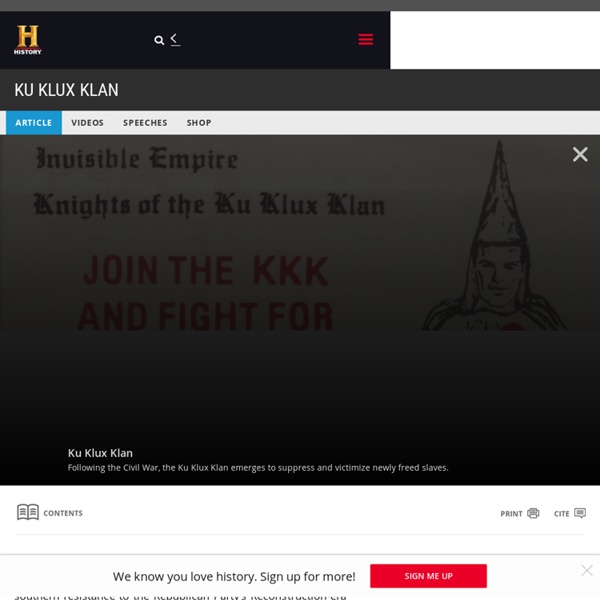 In 1915, white Protestant nativists organized a revival of the Ku Klux Klan near Atlanta, Georgia, inspired by their romantic view of the Old South as well as Thomas Dixon’s 1905 book “The Clansman” and D.W. Griffith’s 1915 film “Birth of a Nation.” This second generation of the Klan was not only anti-black but also took a stand against Roman Catholics, Jews, foreigners and organized labor. It was fueled by growing hostility to the surge in immigration that America experienced in the early 20th century along with fears of communist revolution akin to the Bolshevik triumph in Russia in 1917. The organization took as its symbol a burning cross and held rallies, parades and marches around the country. At its peak in the 1920s, Klan membership exceeded 4 million people nationwide. The Great Depression in the 1930s depleted the Klan’s membership ranks, and the organization temporarily disbanded in 1944.

Brown v. Board of Education (1954) December 9, 1952, Argued May 17, 1954, Decided MR. CHIEF JUSTICE WARREN delivered the opinion of the Court. [1] Ku Klux Klan The Ku Klux Klan, with its long history of violence, is the most infamous - and oldest - of American hate groups. Although black Americans have typically been the Klan's primary target, it also has attacked Jews, immigrants, gays and lesbians and, until recently, Catholics. Over the years since it was formed in December 1865, the Klan has typically seen itself as a Christian organization, although in modern times Klan groups are motivated by a variety of theological and political ideologies.

Reconstruction: The Second Civil War The Civil Rights Act of 1866 granted citizenship and the same rights enjoyed by white citizens to all male persons in the United States "without distinction of race or color, or previous condition of slavery or involuntary servitude." President Andrew Johnson's veto of the bill was overturned by a two-thirds majority in both houses of Congress, and the bill became law. Johnson's attitude contributed the growth of the Radical Republican movement, which favored increased intervention in the South and more aid to former slaves, and ultimately to Johnson's impeachment. 1866 Civil Rights Act 14 Stat. 27-30, April 9, 1866 A.D. CHAP. XXXI.An Act to protect all Persons in the United States in their Civil Rights, and furnish the Means of their Vindication.

Brown v. Board of Education, II (1955) May 31, 1955, Opinion and judgments announced OPINION: MR. CHIEF JUSTICE WARREN delivered the opinion of the Court. [1] [2] These cases were decided on May 17, 1954. The opinions of that date, n1 declaring the fundamental principle that racial discrimination in public education is unconstitutional, are incorporated herein by reference. All provisions of federal, state, or local law requiring or permitting such discrimination must yield to this principle. Extremism in America The Ku Klux Klan is a racist, anti-Semitic movement with a commitment to extreme violence to achieve its goals of racial segregation and white supremacy. Of all the types of right-wing hate groups that exist in the United States, the Klan remains the one with the greatest number of national and local organizations around the country. More than 40 different Klan groups exist, many having multiple chapters, or “klaverns,” including a few that boast a presence in a large number of states. There are over a hundred different Klan chapters around the country, with a combined strength of members and associates that may total around 5,000.

The Rise and Fall of Jim Crow . Jim Crow Stories . Reconstruction Reconstruction generally refers to the period in United States history immediately following the Civil War in which the federal government set the conditions that would allow the rebellious Southern states back into the Union. (The precise starting point is debatable, with some prominent scholars arguing that Reconstruction actually began during the war.) In 1862, Abraham Lincoln had appointed provisional military governors to re-establish governments in Southern states recaptured by the Union Army. The main condition for re-admittance was that at least 10 percent of the voting population in 1860 take an oath of allegiance to the Union.

Ku Klux Klan Facts, information, pictures The Ku Klux Klan (KKK) is a white supremacist organization that was founded in 1866. Throughout its notorious history, factions of the secret fraternal organization have used acts of terrorism—including murder, lynching, arson, rape, and bombing—to oppose the granting of civil rights to African Americans. Deriving its membership from native-born, white Protestant U.S. citizens, the KKK has also been anti-Semitic and anti-Catholic, and has opposed the immigration of all those it does not view as "racially pure." Other names for the group have been White Brotherhood, Heroes of America, Constitutional Union Guards, and Invisible Empire. Origins and Initial Growth

Separate but Equal: Segregation in the Public Schools Introduction The issue of whether public facilities may be segregated based on race first arose in the context of transportation, not education. In the 1896 case of Plessy v Ferguson, the Supreme Court concluded that a Louisiana law requiring whites and blacks to ride in separate railroad cars did not violate the Equal Protection Clause. In an opinion that reads as though written by someone from Mars, Justice Brown wrote that the law did not "stamp the colored race with a badge of inferiority" and that any such suggestion is "soley because the colored race chooses to place that construction on it."

White nationalism In recent years, the Internet has provided an expansion of audiences for white nationalism.[3] Views[edit] White nationalists argue that every nationality feels a natural affection for its own kind.[4] They advocate racial self-preservation and claim that culture is a product of race.[5] According to white nationalist Samuel T. Francis, it is "a movement that rejects equality as an ideal and insists on an enduring core of human nature transmitted by heredity."[6] Jared Taylor, a white nationalist, claims that similar racial views were held by many mainstream American leaders before the 1950s.[6]

Carpetbaggers & Scalawags - American Civil War In general, the term “carpetbagger” refers to a traveler who arrives in a new region with only a satchel (or carpetbag) of possessions, and who attempts to profit from or gain control over his new surroundings, often against the will or consent of the original inhabitants. After 1865, a number of northerners moved to the South to purchase land, lease plantations or partner with down-and-out planters in the hopes of making money from cotton. At first they were welcomed, as southerners saw the need for northern capital and investment to get the devastated region back on its feet. They later became an object of much scorn, as many southerners saw them as low-class and opportunistic newcomers seeking to get rich on their misfortune.

Brown v. Board of Education of Topeka, Kansas - Brown v. Board at Fifty: "With an Even Hand" Three lawyers confer at the Supreme Court, 1953. Gelatin silver print. New York World-Telegram & Sun Collection, Prints and Photographs Division, Library of Congress (98) The National Association for the Advancement of Colored People (NAACP) and its legal offspring, the Legal Defense and Educational Fund, developed a systematic attack against the doctrine of “separate but equal.” The campaign started at the graduate and professional educational levels.