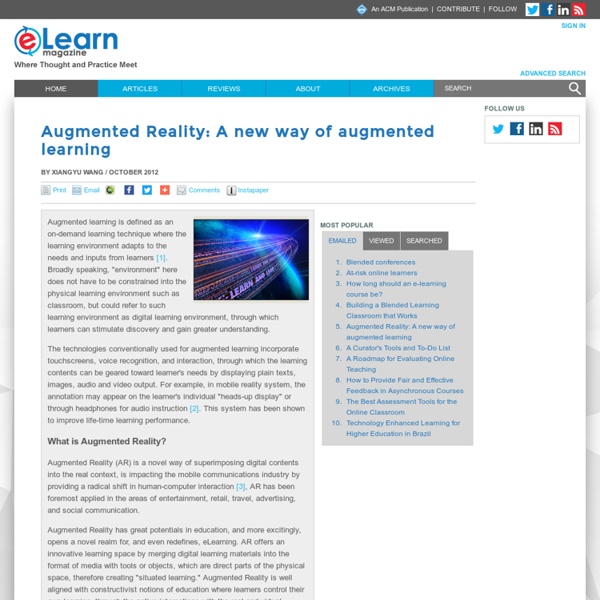 Augmented learning is defined as an on-demand learning technique where the learning environment adapts to the needs and inputs from learners [1]. Broadly speaking, "environment" here does not have to be constrained into the physical learning environment such as classroom, but could refer to such learning environment as digital learning environment, through which learners can stimulate discovery and gain greater understanding. The technologies conventionally used for augmented learning incorporate touchscreens, voice recognition, and interaction, through which the learning contents can be geared toward learner's needs by displaying plain texts, images, audio and video output. For example, in mobile reality system, the annotation may appear on the learner's individual "heads-up display" or through headphones for audio instruction [2]. This system has been shown to improve life-time learning performance. What is Augmented Reality? Implications of AR for Education Conclusions References

20 Ways to Use Augmented Reality in Education Second Life proved an incredibly valuable tool for educators hoping to reach a broad audience — or offering even more ways to learn for their own bands of students. Augmented Reality Development Lab: Affiliated with Google, Microsoft, and Logitech, the Augmented Reality Development Lab run by Digital Tech Frontier seeks to draw up projects that entertain as well as educate. The very core goal of the ARDL involves creating interactive, three-dimensional objects for studying purposes. Reliving the Revolution: Karen Schrier harnessed GPS and Pocket PCs to bring the Battle of Lexington to her students through the Reliving the Revolution game, an AR experiment exploring some of the mysteries still shrouding the event — like who shot first! Players assume different historical roles and walk through everything on a real-life map of the Massachusetts city.

Augmented Reality Brings New Dimensions to Learning Editor's Note: Drew Minock, who co-wrote this piece, is an elementary teacher, co-founder of the popular education blog Two Guys and Some IPads, and is one of the voices on "The Two Guys Show" podcast. Imagine living in the magical world of Harry Potter, where the school hallways are lined with paintings that are alive and interactive. Now imagine creating an atmosphere like that for your students. Augmented Reality (AR) allows educators and students to do just that: unlock or create layers of digital information on top of the physical world that can be viewed through an Android or iOS device.

Augmented reality NASA X38 display showing video map overlays including runways and obstacles during flight test in 2000. Early example of AR: Overlaying electromagnetic radio waves onto visual reality. Sequential Wave Imprinting Machine imprints visual images onto the human eye's retina or photographic film. Augmented reality (AR) is a live direct or indirect view of a physical, real-world environment whose elements are augmented (or supplemented) by computer-generated sensory input such as sound, video, graphics or GPS data. It is related to a more general concept called mediated reality, in which a view of reality is modified (possibly even diminished rather than augmented) by a computer. As a result, the technology functions by enhancing one’s current perception of reality.[1] By contrast, virtual reality replaces the real world with a simulated one.[2][3] Augmentation is conventionally in real-time and in semantic context with environmental elements, such as sports scores on TV during a match.

Image recognition that triggers augmented reality - Matt Mills Augmented Reality, abbreviated AR, is an artificial environment made up of the combination or real and computer-generated date, usually overlayed images connected in real-time. Augmented reality lies somewhere between virtual reality and the real world. How does augmented reality work? From shopping to culture to decorating your home, find out some ways in which augmented reality will improve your life. 3D Street Art gets upgraded to 4D with augmented reality! Augmented & Virtual Reality Improve Learning Experience Game designers have long understood the impact that deeply immersive environments can have on people. Just ask anyone who has been stalked by vengeful aliens for hours on end, from the safety and comfort of their sofas. The same technology that has captured the attention of video game enthusiasts and the general public may be making its way into the classroom in the relatively near future — presumably minus zombies. Virtual reality (VR) and augmented reality (AR) tech were once only thought to be things of science fiction. The recent refinement and commercialization of immersive and interactive technologies like Oculus and Microsoft HoloLens have made them a reality. But could this technology possibly be useful to students?

Law Library of Congress The Guide to Law Online, prepared by the Law Library of Congress Public Services Division, is an annotated guide to sources of information on government and law available online. It includes selected links to useful and reliable sites for legal information. The Guide to Law Online is an annotated compendium of Internet links; a portal of Internet sources of interest to legal researchers. Although the Guide is selective, inclusion of a site by no means constitutes endorsement by the Law Library of Congress. In compiling this list, emphasis wherever possible has been on sites offering the full texts of laws, regulations, and court decisions, along with commentary from lawyers writing primarily for other lawyers.

20 Coolest Augmented Reality Experiments in Education So Far Augmented reality is exactly what the name implies — a medium through which the known world fuses with current technology to create a uniquely blended interactive experience. While still more or less a nascent entity in the frequently Luddite education industry, more and more teachers, researchers, and developers contribute their ideas and inventions towards the cause of more interactive learning environments. Many of these result in some of the most creative, engaging experiences imaginable, and as adherence grows, so too will students of all ages. Second Life:Because it involves a Stephenson-esque reality where anything can happen, Second Life proved an incredibly valuable tool for educators hoping to reach a broad audience — or offering even more ways to learn for their own bands of students.