Constitution of the United States - Official 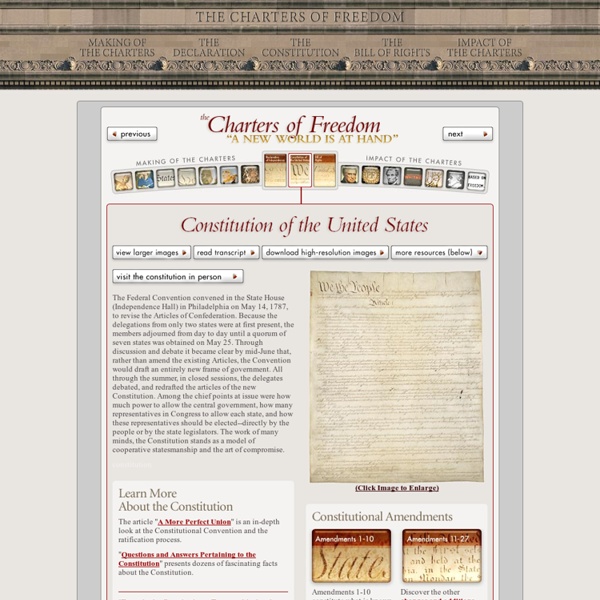 The Federal Convention convened in the State House (Independence Hall) in Philadelphia on May 14, 1787, to revise the Articles of Confederation. Because the delegations from only two states were at first present, the members adjourned from day to day until a quorum of seven states was obtained on May 25. Through discussion and debate it became clear by mid-June that, rather than amend the existing Articles, the Convention would draft an entirely new frame of government. All through the summer, in closed sessions, the delegates debated, and redrafted the articles of the new Constitution. Among the chief points at issue were how much power to allow the central government, how many representatives in Congress to allow each state, and how these representatives should be elected--directly by the people or by the state legislators. The work of many minds, the Constitution stands as a model of cooperative statesmanship and the art of compromise. constitution

Laws and Regulations Federal Regulations Regulations are issued by federal agencies, boards, or commissions. They explain how the agency intends to carry out a law. The Rulemaking Process Three Branches of Government LEGISLATIVE: Yeah. It’s the legislative branch. I’m the one that pass the laws. So if you want to make something happen, you’ve got to go through me. United States Constitution Supreme law of the United States of America The Constitution of the United States is the supreme law of the United States of America.[2] The Constitution, originally comprising seven articles, delineates the national frame of government. Its first three articles embody the doctrine of the separation of powers, whereby the federal government is divided into three branches: the legislative, consisting of the bicameral Congress (Article I); the executive, consisting of the president and subordinate officers (Article II); and the judicial, consisting of the Supreme Court and other federal courts (Article III). Article IV, Article V and Article VI embody concepts of federalism, describing the rights and responsibilities of state governments, the states in relationship to the federal government, and the shared process of constitutional amendment.

Transcript of the Constitution of the United States - Official Text The Constitution of the United States: A Transcription Note: The following text is a transcription of the Constitution as it was inscribed by Jacob Shallus on parchment (the document on display in the Rotunda at the National Archives Museum.) Items that are hyperlinked have since been amended or superseded. Federal crime in the United States Federal Bureau of Investigation Seal. The FBI is the main agency responsible for investigating and prosecuting federal offences. In the United States, a federal crime or federal offense is an act that is made illegal by U.S. federal legislation. In the United States, criminal law and prosecution happen at both the federal and the state levels; thus a “federal crime” is one that is prosecuted under federal criminal law, and not under a state's criminal law, under which most of the crimes committed in the United States are prosecuted. This includes many acts that, if they did not occur on U.S. federal property or on Indian reservations or were not specifically penalized, would otherwise not be crimes or fall under state or local law. Numerous federal agencies have been granted powers to investigate federal offenses to include, but not limited to, the Bureau of Alcohol, Tobacco, Firearms, and Explosives, Drug Enforcement Administration, Federal Bureau of Investigation, U.S.

The U.S. Constitution By September 1787, the convention’s five-member Committee of Style (Hamilton, Madison, William Samuel Johnson of Connecticut, Gouverneur Morris of New York, Rufus King of Massachusetts) had drafted the final text of the Constitution, which consisted of some 4,200 words. On September 17, George Washington was the first to sign the document. Of the 55 delegates, a total of 39 signed; some had already left Philadelphia, and three–George Mason (1725-92) and Edmund Randolph (1753-1813) of Virginia, and Elbridge Gerry (1744-1813) of Massachusetts–refused to approve the document. In order for the Constitution to become law, it then had to be ratified by nine of the 13 states.

1 Our federal government has three parts. They are the Executive, (President and about 5,000,000 workers) Legislative (Senate and House of Representatives) and Judicial (Supreme Court and lower Courts). The President of the United States administers the Executive Branch of our government. Marijuana Study Shows Positives and Negatives While perusing YouTube we happened to stumble across an interesting video in which two internet news personalities took stabs at a 20 year study of marijuana users that recently became available. If you have been arrested for marijuana possession, or any other criminal offense involving marijuana, Galveston criminal law attorney Tad Nelson will represent you, and defend you in the court of law. The criminal penalties for offenses involving marijuana can range from a few days in jail up to 20 years in prison, depending on the amount of marijuana involved with your case. The stiff penalty for drug offenses in Texas makes it very important that you seek legal representation immediately if you’ve been charged with a related drug crime. Marijuana Study Shows Positives and Negatives