How will extended Sunday trading laws work? A consultation has been launched by the Government on extending Sunday trading in local areas across England and Wales, in line with an announcement at last month's Budget. 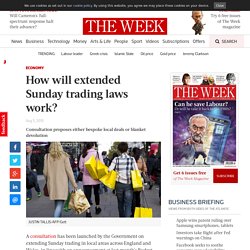 Many larger retailers have been calling for the change for years to what they see as an outmoded restriction as they face competition from the internet, which doesn't have opening or closing hours. But others, such as small business groups, have reacted angrily to a proposal that will erode an important competitive advantage. What is being proposed? The Government's plans would see prohibitions limiting large stores from opening on Sundays for more than six hours lifted in certain circumstances. The decision would be devolved to local leaders, so it is unlikely that all-day opening on Sunday will be ubiquitous at least for a while. What are the current laws? Under the Sunday Trading Act 1994, shops with a floor space of more than 3,000 sq ft are currently subject to the six-hour restriction. Is there opposition? George Osborne's budget to include shakeup of Sunday trading laws.

The biggest shakeup of trading laws since the reforms of the 1990s is set to be unveiled in the budget on Wednesday. 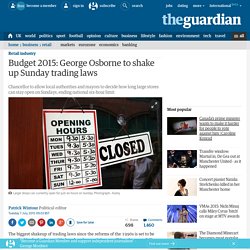 George Osborne will hand responsibility for Sunday trading laws in England and Wales to towns and cities, allowing them to decide how long shops can stay open, in a move that will put an end to the ban on large stores staying open for more than six hours. The six-hour rule was relaxed for six weeks in July 2012 during the Olympics, resulting in a relatively significant surge in sales. The Liberal Democrats, then part of the coalition government, opposed a permanent relaxation at the time, insisting that Sunday should remain special and that the compromise between consumers, traders, shopworkers and the religious should be retained. Osborne has decided that verdicts on similar relaxations of the law should in future be taken at a local level, so that areas that think longer opening hours would boost economic activity would be free to do so. 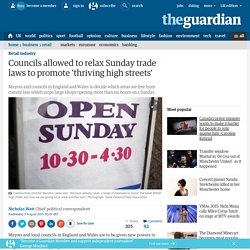 Under government plans to allow high streets to “grow and thrive”, councils will be given powers to zone areas where Sunday trading laws could be relaxed. The changes would mean that a local council could declare that shops on a designated high street could be allowed to operate under more relaxed hours while out-of-town shopping centres with fewer local ties could face restrictions. The move will be announced on Wednesday as Brandon Lewis, the communities minister, and Anna Soubry, the business minister, launch a consultation process on liberalising Sunday trading laws.

Sunday trading law reform 'will damage fabric of society' But, more fundamentally, they insist that the move would trigger the end of a common day of rest and recreation, cherished far more widely than simply those motivated by religious beliefs. 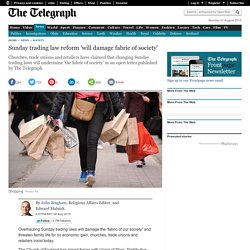 “Keeping Sunday special is essential to the fabric of our society,” they write. “Longer Sunday opening will have a dramatic effect on family life for no economic gain.” Weekend trading laws in England and Wales were last changed in 1994 when rules came in allowing larger shops to open on Sunday for no more than six hours, between set times, leaving small convenience stores free to open for longer. All Barclaycard shoppers will now earn cashback from the first pound they spend – but have to carry two pieces of plastic Photo: Fotolia The current law amounts to a “great British compromise”, the signatories argue.

Under plans unveiled last week, local councils will be given new powers to set their own Sunday trading arrangements. • Sunday opening won't destroy the Church - but the Church might destroy itself. Budget Statement – Sunday Trading. Today the Chancellor of the Exchequer, George Osborne, announced his Summer Budget 2015. 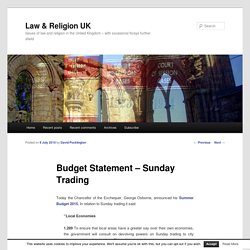 In relation to Sunday trading it said: “Local Economies 1.289 To ensure that local areas have a greater say over their own economies, the government will consult on devolving powers on Sunday trading to city mayors and local authorities.