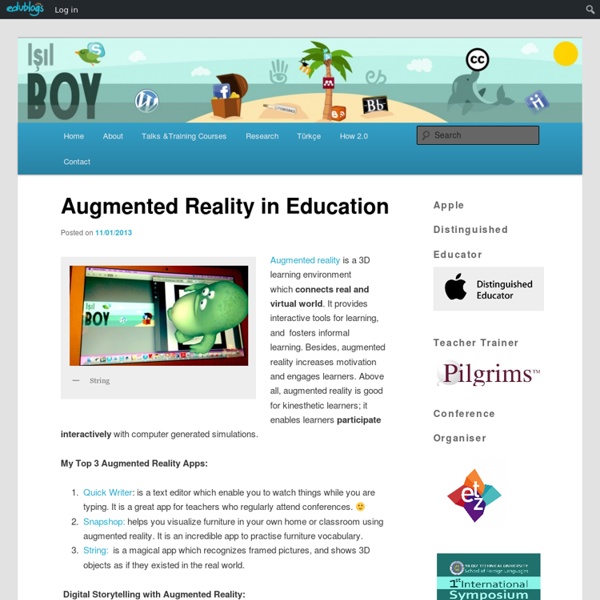 Educational Technology and Mobile Learning: 8 Excellent Augmented Reality Apps for iPad In this post Educational Technology and Mobile Learning is providing you with a list of some awesome augmented reality apps for your iPad but before that let us first see what the concept of augmented reality is all about . Augmented reality is a relatively new digital phenomenon that is brought about by the recent development in the field of technology and particularly mobile technology. In augmented reality the line between the virtual world and the real one is blurred. Engineers use some sophisticated technologies to pull out graphics from television screen and computer display and integrate them into real world environments. Though it is still relatively early to talk about the impact of augmented reality on education and learning in particular, some educators have already started foreseeing its integration into the classroom, and according to Paul Hamilton there are several reasons for this : Augmented Reality links knowledge/content with relevant visual imagery.

3 Steps to Creating an Awesome Virtual Museum in Class You're spending an afternoon browsing the exhibits at an art museum. If you're anything like me, you'd probably appreciate the art a lot more if you could bring someone along that could explain the history and nuances of the pieces on display. Now imagine pointing a device at the painting and seeing it morph into a dynamic video giving you all the information you wanted about the art. Welcome to augmented reality. Virtual reality replaces the real world with an artificial, digital environment. The Virtual Museum I've worked with teachers at several schools to created virtual museums - student created exhibits that use augmented reality to display student videos when a device is pointed at an exhibit. We used a popular augmented reality app called Aurasma. Visitors were sent an email asking them to download the free Aurasma app and bring their device. We talk about the importance of "depth" in education. I'm sure you'll come up with lots of ideas of your own. A. Media: Create video. B.

7 Ways Augmented Reality Will Improve Your Life You might think augmented reality is the way of the future, but really, it has its roots in the 20th century. Morton Heilig, the "Father of Virtual Reality," patented the Sensorama Stimulator, which he called an "experience theater," on Aug. 28, 1962. Over time, the idea of using technology to create a layer over the real world has been honed and refined and put in our palms, thanks to the proliferation of smartphones. Confused about what augmented reality is? While mainstream examples of AR have been, to date, on the fluffy side (like this and this), the technology has promise as an urban utility. "It's not a futuristic, fringy thing "It's not a futuristic, fringy thing," says Goldrun founder Vivian Rosenthal. Improvements to the technology means more promise for AR — and 2.5 billion AR apps are expected to be downloaded by 2017. 1. In a new neighborhood or exploring another city? Lord explained another fun use of AR beyond helping you get around. 2. Visiting a museum? 3. 4. 5. 6. 7.

Mission Oceans 20 Ways to Use Augmented Reality in Education Second Life proved an incredibly valuable tool for educators hoping to reach a broad audience — or offering even more ways to learn for their own bands of students. Augmented Reality Development Lab: Affiliated with Google, Microsoft, and Logitech, the Augmented Reality Development Lab run by Digital Tech Frontier seeks to draw up projects that entertain as well as educate. The very core goal of the ARDL involves creating interactive, three-dimensional objects for studying purposes. Reliving the Revolution: Karen Schrier harnessed GPS and Pocket PCs to bring the Battle of Lexington to her students through the Reliving the Revolution game, an AR experiment exploring some of the mysteries still shrouding the event — like who shot first! Players assume different historical roles and walk through everything on a real-life map of the Massachusetts city. FETCH! Driver’s ed: Toyota teamed up with Saatchi & Saatchi to deliver the world’s cleanest and safest test-drive via augmented reality.

Augmented Reality: The Future of EdTech By: Drew Minock Augmented reality is defined as “a live direct or indirect view of a physical, real-world environment whose elements are augmented (or supplemented) by computer generated sensory input such as sound, video, graphics, or GPS data.” (Wikipedia) We have discovered that augmented reality is much more than the definition describes – it is the future of educational technology. It all started on March 21st at the MACUL Conference in Detroit when the great Leslie Fisher showed the $20 bill trick using an app called Aurasma. Augmented reality allows us to put objects in the hands of our students that would have previously been impossible. There are several augmented reality applications available to download onto your mobile device, but few give you power to create your own experience like Aurasma. “She loves the Aurasma application, she loves that she can hear YOUR explanations at any time“– it’s so much better than doing homework with me or her father. character or person.