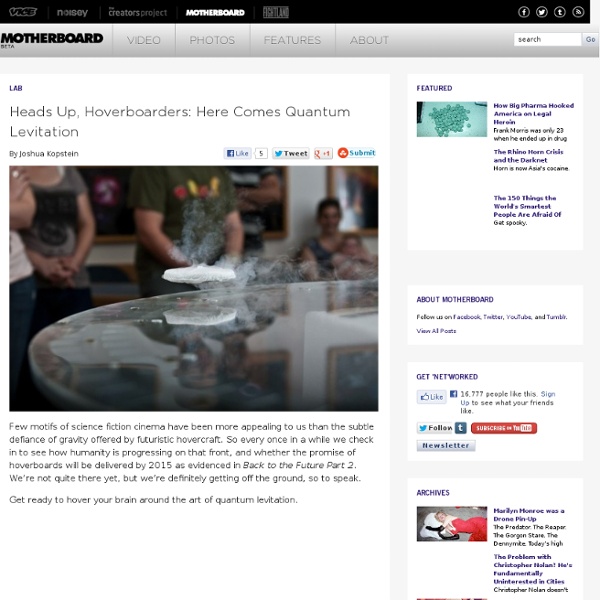 Few motifs of science fiction cinema have been more appealing to us than the subtle defiance of gravity offered by futuristic hovercraft. So every once in a while we check in to see how humanity is progressing on that front, and whether the promise of hoverboards will be delivered by 2015 as evidenced in Back to the Future Part 2. We’re not quite there yet, but we’re definitely getting off the ground, so to speak. Get ready to hover your brain around the art of quantum levitation. That’s right, quantum. Normally that word indicates that it’s difficult to explain what’s going on. Because of its chemical properties, a superconductor (when brought to low enough temperatures using, say, liquid nitrogen) exhibits this effect, causing the energy from the magnet below to warp around the superconductive object in a way which “locks” it in space. NASA has been interested in quantum levitation for quite a while, as it turns out. Connections:

MIT Creates New Energy Source This is some pretty exciting news. It seems that researchers at the Massachusetts Institute of Technology (MIT), one of the most prestigious science and engineering schools in the United States, has created a new energy source -- and it's clean and renewable. The odd thing is that the only way you can see this energy source is with a very powerful microscope, because it is created by using nanotechnology. The 6 Most Mind-Blowing Things Ever Discovered in Space #3. A Cold Star Here's the very first lesson you learned about the cosmos: The sun is hot. Even before you knew what the sun was, or what a star was made of, you knew that. When you get into the science of it, you realize that you were even more right than you thought: The surface of the sun is about 10,000 degrees Fahrenheit, and several thousand times hotter than that at the core. So, yeah, the one thing we know about stars is that you don't ever want to try to land on one, unless you want to instantly burst into flame.

Quantum teleportation achieved over ten miles of free space Quantum teleportation has achieved a new milestone or, should we say, a new ten-milestone: scientists have recently had success teleporting information between photons over a free space distance of nearly ten miles, an unprecedented length. The researchers who have accomplished this feat note that this brings us closer to communicating information without needing a traditional signal, and that the ten miles they have reached could span the distance between the surface of the earth and space. As we've explained before, "quantum teleportation" is quite different from how many people imagine teleportation to work. Rather than picking one thing up and placing it somewhere else, quantum teleportation involves entangling two things, like photons or ions, so their states are dependent on one another and each can be affected by the measurement of the other's state.

Engineering News, Date February 3, 2003 Vol.73, no. 3S ME student discovers a unique fact about polar bears Everyone knows that polar bears are furry and cute, but few know that sometimes they can also be invisible. While still an ME undergrad at Berkeley, Jessica Preciado plumbed the icy depths of a question that already had the whole natural science community buzzing. A few years ago, scientists doing an aerial census of the polar bear population in the arctic encountered a problem. The polar bears being counted were hard to spot because their white fur blended into the snow. Pocket Boom Portable Vibration Speaker – Black Thanks to MobileFun for sending this out to me for review. Pros: - Small and compact - Uses a small vibration pad - Can turn literally anything into a speaker Cons: - 3.5mm jack could be longer - Requires AAA batteries - Sticky pad can lose stickiness over time There is no doubt that there are many portable speakers out there.

One-Minute Physics archive Sandrine Ceurstemont, editor, New Scientist TV What's part of the universe? You may think of it as incorporating everything that exists - both on Earth and in space - but could it also include the unknown? Scientists Find a Population of Butterflies That Appears to Be Splitting Into Two Species Nov. 5, 2009 AUSTIN, Texas — Breaking up may actually not be hard to do, say scientists who've found a population of tropical butterflies that may be on its way to a split into two distinct species. Polymorphic mimicry in Heliconius cydno alithea in western Ecuador, where the white form (middle left) mimics the white species Heliconius sapho (top left) and the yellow form (middle right) mimics the yellow species Heliconius eleuchia (bottom right). Image: Marcus Kronforst and Krushnamegh Kunte

Radio telescopes capture best-ever snapshot of black hole jets An international team, including NASA-funded researchers, using radio telescopes located throughout the Southern Hemisphere has produced the most detailed image of particle jets erupting from a supermassive black hole in a nearby galaxy. "These jets arise as infalling matter approaches the black hole, but we don't yet know the details of how they form and maintain themselves," said Cornelia Mueller, the study's lead author and a doctoral student at the University of Erlangen-Nuremberg in Germany. The new image shows a region less than 4.2 light-years across -- less than the distance between our sun and the nearest star.

Secrets of the first practical artificial leaf A detailed description of development of the first practical artificial leaf -- a milestone in the drive for sustainable energy that mimics the process, photosynthesis, that green plants use to convert water and sunlight into energy -- appears in the ACS journal Accounts of Chemical Research. The article notes that unlike earlier devices, which used costly ingredients, the new device is made from inexpensive materials and employs low-cost engineering and manufacturing processes. Daniel G. Nocera points out that the artificial leaf responds to the vision of a famous Italian chemist who, in 1912, predicted that scientists one day would uncover the "guarded secret of plants." The most important of those, Nocera says, is the process that splits water into hydrogen and oxygen. The artificial leaf has a sunlight collector sandwiched between two films that generate oxygen and hydrogen gas.

Reuben Margolin’s Kinetic Wave Sculptures Our Mechanics theme brought to mind San Francisco Bay Area kinetic sculptor Reuben Margolin, one of my all-time favorite artists. He makes mind-blowing, moving art based on tiny observations in nature. His collection of waves has the ability to quiet, soothe, and inspire awe in the viewer. Margolin combines math and simple materials (and insanely neat string and pulley systems) to recreate and amplify subtle effects that often go unnoticed in nature, like a tiny ripple or the movement of a caterpillar.

Antimatter belt around Earth discovered by Pamela craft 7 August 2011Last updated at 10:54 The antiprotons lie sandwiched between the inner and outer Van Allen belts (in red) around the Earth A thin band of antimatter particles called antiprotons enveloping the Earth has been spotted for the first time. The find, described in Astrophysical Journal Letters, confirms theoretical work that predicted the Earth's magnetic field could trap antimatter. The team says a small number of antiprotons lie between the Van Allen belts of trapped "normal" matter. The researchers say there may be enough to implement a scheme using antimatter to fuel future spacecraft.

STEPHEN HAWKING: How to build a time machine By STEPHEN HAWKING Created: 18:47 GMT, 27 April 2010 All you need is a wormhole, the Large Hadron Collider or a rocket that goes really, really fast 'Through the wormhole, the scientist can see himself as he was one minute ago. But what if our scientist uses the wormhole to shoot his earlier self? Material Science Madness: Crazy Metal Melts in Your Hand There is an incredible metal that shatters like glass, melts in a human hand, attacks other metals but is non-toxic to humans, and acts like an alien life form when exposed to sulfuric acid and dichromate solution. It sounds too amazing to be true, but gallium is an absolutely real chemical element that’s found in some of the gadgets we use every day. But perhaps more interestingly, there are a ton of insane experiments scientists like to do with gallium. Thanks to its odd properties and behavior, gallium can do some pretty strange things in the lab.