Virtual Reality Poised for Mass Entertainment, but Can Hollywood Make It Happen? 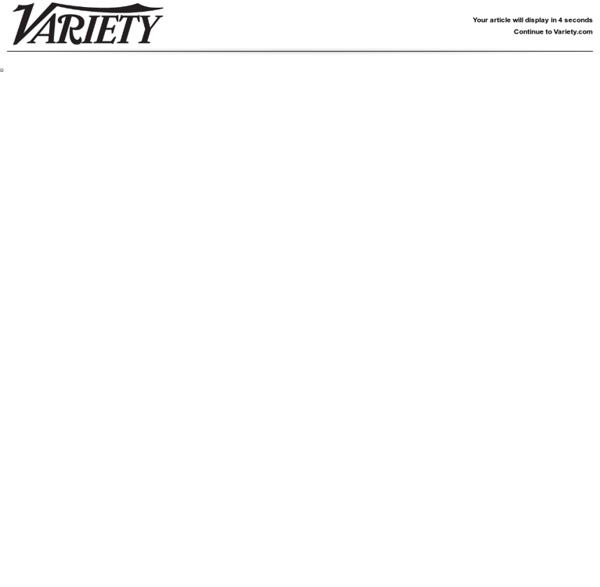 Are Movie Theaters About to Disappear? How VR Will Remake Hollywood Since the first public movie theater opened in the U.S. in 1905, movies have evolved significantly—sound, color, computer effects, high definition. However, one thing hasn’t changed. We still go to the theater to see our favorite films on the big screen.

Politique fiscale France is set to launch its new tax rebates for international production by the end of the year. This will put it in the same price bracket as rival Western European locations in the contest to attract productions from the U.S. and other countries that have no co-production treaties with France, says Patrick Lamassoure, managing director of the French Film Commission. The rebates, which will apply to film and TV projects, will be worth 20% of all production spend in France up to a maximum benefit of x4 million ($6 million). There are a few strings attached:

'The Big Bang Theory': Anatomy of the 100th Episode (Exclusive) "The Big Bang Theory's" Johnny Galecki and Kaley Cuoco [Warning: This story contains spoilers from Thursday's "The Recombination Hypothesis" episode of The Big Bang Theory.] The concept for Thursday's 100th episode of The Big Bang Theory -- in which Leonard (Johnny Galecki) and Penny (Kaley Cuoco) reunite -- started well before Thanksgiving with an email from Chuck Lorre to Bill Prady and Steve Molaro. Lorre's initial intention, Prady tells The Hollywood Reporter, was to bring the show full circle back to the pilot and tell a dual what-if dream story exploring what their lives could have been like if Leonard had asked Penny out upon meeting her when she first moved in across the hall. "Chuck had proposed a very big dream sequence episode -- possible futures -- of what would happen if they married," says Prady, who co-created the CBS comedy with Lorre.

Orphan Works: Science Fiction and Fantasy Writers of America Weighs In Posted by Victoria Strauss for Writer Beware The issue of orphan works–out of print, still-in-copyright books, films, photographs, etc. whose rightsholders can’t be found–is one that has been much in the news over the past few years. Concern over a potential monopoly on orphan works was a major component of the criticism of the now-defunct Google Book Settlement, which sought to resolve authors’ and publishers’ objections to Google’s unauthorized scanning of in-copyright books. Orphan works also played a major part in the Authors Guild’s recent lawsuit against a number of US universities, which combined digitized books–including unauthorized scans provided by Google–into a repository called HathiTrust. Why should we worry about orphan works?

Introducing 360 Video on Facebook By Maher Saba, Engineering Director, Video Starting today, 360-degree videos will begin rolling out in News Feed. Our goal at Facebook is to connect you with the people and things that matter, every single day. Path Accused of Spamming with Texts, Robocalls Reports surfaced this week that Path – the photo-powered social network of 10 million users – stands accused of resorting to “spammy tactics” for the presumable purpose of recruiting more members. Adrianne Jeffries of The Verge says that digital marketer Stephen Kenwright “downloaded the app earlier this week, tried it out, uninstalled it, and went to bed.” But that seeming conclusion to Kenwright’s relationship with Path wasn’t the end at all. “When he woke up,” Jeffries reports, “he found that Path had gone on a rogue mission early in the morning, texting and robocalling an unknown number of his contacts, including his grandparents.” Path reportedly worked its way through Kenwright’s entire contact book by the next day. Coworkers, friends, and family were asking him about the text or phone call they’d received from Path, which stated that Kenwright wanted to share photos with them.

THE BIG BANG THEORY: Cast Talk Reaching the Big 100 Happy 100th episode, THE BIG BANG THEORY! Yes, our favorite nerds are celebrating the big 1-0-0, and when I hit up the party celebrating the big milestone, I couldn’t resist asking series stars Simon Helberg (Howard), Kunal Nayyar (Raj), Mayim Bialik (Amy), and Melissa Rauch (Bernadette) what fans could expect from the episode… Poor Jim Parsons (Sheldon) was really sick when the cast was celebrating reaching episode 100, but he was game enough to share his own little tease about the episode.