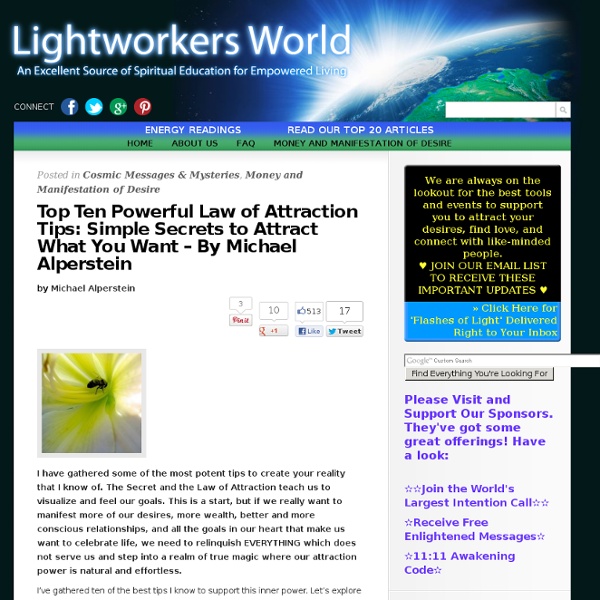 I have gathered some of the most potent tips to create your reality that I know of. The Secret and the Law of Attraction teach us to visualize and feel our goals. This is a start, but if we really want to manifest more of our desires, more wealth, better and more conscious relationships, and all the goals in our heart that make us want to celebrate life, we need to relinquish EVERYTHING which does not serve us and step into a realm of true magic where our attraction power is natural and effortless. I’ve gathered ten of the best tips I know to support this inner power. 1. Change comes with flow and contentment. Your only job is to be in the Flow of Life by consciously experiencing your joy and your clarity about your deepest mission and Higher Vision. This will activate the Law of Attraction and Universal Flow, and it will improve the circumstances of your life immensely. NOTE: You don’t have to fully understand any of this… Part of you secretly knows everything you need… 2. 3. 4. 5. 6. 7.

Five Meaningful Methods of Meditation In my last article, A Layman’s Guide to Mindful Meditation, we discussed the “why” of meditation. In this article we will discuss the “how.” There’s a myriad of methods for meditation. Some are easy and some are difficult. All require daily practice to perfect. Here are five of the most popular methods of meditation and what they each bring to the Meditation Table. Mindfulness, or Spiritual Method: A most popular method comes from Buddhist meditation practice of Vipassana. How to: One can practice mindfulness in any position, even lying down. Zen or Zazen Method: Also from the Buddhist tradition, this method is all about simply sitting. How to: The most effective positioning of the body for the practice of Zazen is the stable, symmetrical position of the seated Buddha. Kundalini or Transcendental Method: This method comes from the Vedanta Hinduism tradition and ties into different forms of Yoga practices. How to: Breathing is primary. Qigong Method or Movement Method: Image Source ~

The Biblical Teaching of Grace: part 1 "For the Law was given by Moses, but grace and truth came by Jesus Christ." (John 1:17). The law basically refers to the books of Exodus, Leviticus, Numbers and Deuteronomy. John is recognizing the greatness of Moses in a past dispensation, and recognizing the importance of Moses in that dispensation. It is very important to note that the Mosaic Law was good. Romans 7:12, "....the law is holy, and the commandment is holy, righteous and good." Even though the Mosaic Law was good, holy, and righteous, the main problem was that it was weak through the flesh. Therefore, the law was good, but it was weak through the sinful nature of mankind. "For the law was given through Moses, but grace and truth came through Jesus Christ." God's plan is declared in time through Bible doctrine. John 1:17 presents a contrast. In order to simplify the principles of grace, I am going to explain them by giving them by numbers. (1). (2). (3). (4). (A). (5). (6). (7). (8). (9). (10). (11).

How the 99% Became the Great Duck Dinner of the 1% Although there are many excellent books worth reading, one of my favorites is The Creature from Jekyll Island by G. Edward Griffin because it documents and explains how the bankster/political elites took over the world for the express purpose of concentrating all wealth and power by reducing the masses to plantation styled dependency and serfdom. Chapter 23 of The Creature From Jekyll Island (The Creature) is titled The Great Duck Dinner. If Americans want to understand what has gone wrong in America, look no further than Griffin's incredible parable about the Great Duck Dinner. Are human indistinguishable from ducks? Our actions say yes. Excerpted from The Creature The story is told of a New England farmer with a small pond in his pasture. Fall came, and the ducks stayed.

Gnostics, Gnostic Gospels, & Gnosticism A one-sentence description of Gnosticism: a religion that differentiates the evil god of this world (who is identified with the god of the Old Testament) from a higher more abstract God revealed by Jesus Christ, a religion that regards this world as the creation of a series of evil archons/powers who wish to keep the human soul trapped in an evil physical body, a religion that preaches a hidden wisdom or knowledge only to a select group as necessary for salvation or escape from this world. The term "gnostic" derives from "gnosis," which means "knowledge" in Greek. The Gnostics believed that they were privy to a secret knowledge about the divine, hence the name. (Huxley coined "agnosticism" on the basis that all knowledge must be based on reason. We cannot rationally claim to have access to knowledge that is beyond the powers of the intellect.) There are numerous references to the Gnostics in second century proto-orthodox literature. Here are some books about Gnostics and Gnosticism.

Shadow people An artist's impression of a shadow person as a paranormal entity A shadow person (also known as a shadow figure, shadow being or black mass) is the perception of a patch of shadow as a living, humanoid figure, particularly as interpreted by believers in the paranormal or supernatural as the presence of a spirit or other entity.[1] Many methamphetamine addicts report hallucinations of "shadow people", as a result of sleep deprivation. History and folklore[edit] The Coast to Coast AM late night radio talk show helped popularize modern beliefs in shadow people.[2] The first time the topic of shadow people was discussed at length on the show was April 12, 2001 when host Art Bell interviewed Native American elder Thunder Strikes, who is also known as Harley "SwiftDeer" Reagan. Explanations[edit] Several physiological and psychological conditions can account for reported experiences of shadowy shapes seeming alive. In popular culture[edit] See also[edit] References[edit]

Nine Things Successful People Do Differently - Heidi Grant Halvorson - Harvard Business Review - StumbleUpon Learn more about the science of success with Heidi Grant Halvorson’s HBR Single, based on this blog post. Why have you been so successful in reaching some of your goals, but not others? If you aren’t sure, you are far from alone in your confusion. It turns out that even brilliant, highly accomplished people are pretty lousy when it comes to understanding why they succeed or fail. The intuitive answer — that you are born predisposed to certain talents and lacking in others — is really just one small piece of the puzzle. In fact, decades of research on achievement suggests that successful people reach their goals not simply because of who they are, but more often because of what they do. 1. To seize the moment, decide when and where you will take each action you want to take, in advance. 3. Fortunately, decades of research suggest that the belief in fixed ability is completely wrong — abilities of all kinds are profoundly malleable. 7. 8. 9.

10 Tips for Spiritual Growth Spiritual growth is the process of inner awakening, and becoming conscious of our inner being. It means the rising of the consciousness beyond the ordinary existence, and awakening to some Universal truths. It means going beyond the mind and the ego and realizing who you really are. Spiritual growth is a process of shedding our wrong and unreal conceptions, thoughts, beliefs and ideas, and becoming more conscious and aware of our inner being. This process uncovers the inner spirit that is always present, but hidden beyond the ego-personality. Spiritual growth is of great importance for everyone, not only for people who seek spiritual enlightenment and choose to live in far away or secluded places. By discovering who we really are we take a different approach to life. You can walk on the path of spiritual growth, and at the same time live the same kind of life as everyone else. 10 tips for spiritual growth: 1. 2. 3. 4. 5. 6. 7. 8. 9. 10.

Writers Workshop | Plot and Structure Our Quick Guide on writing plots that grip the reader In these days of the 3-for-2 tables and Tesco Book Clubs, fiction has taken a step forwards into the past. These days, plot matters. No fiction will be taken on by agents - no matter how brilliantly written, how edgily contemporary, how weighty in subject matter - unless it has a strong story line. We've seen stunning work rejected for this reason. See also our More About Plotting guide ... and do watch out for the video below. The oldies are still the goodies Plotting hasn’t changed since Aristotle. 1) The protagonist must have a clear central motivation. 2) The protagonist’s goal (which derives from that motivation) has to be determined as early as possible into the novel. 3) The jeopardy must increase. 4) Every scene and every chapter must keep the protagonist off-balance - things may get better for him/her, o r worse, but they need to be constantly changing. 5) Don’t spend time away from the story. 7) Control your characters.