India-law, constitution and must know 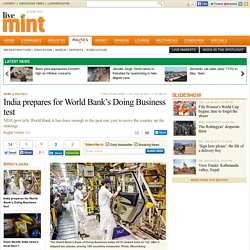 India loses poultry case against U.S. at WTO. India has lost a case at the World Trade Organisation (WTO) as the body on Thursday ruled that the Indian ban on import of poultry meat, eggs and live pigs from the U.S. was “inconsistent” with the international norms. 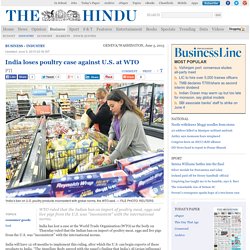 India will have 12-18 months to implement this ruling, after which the U.S. can begin exports of these products to India. India loses poultry case against U.S. at WTO. The water tribunal trap. At the Joint Conference of Chief Ministers of States and Chief Justices of High Courts held in April this year, Prime Minister Narendra Modi wondered if tribunals have become ‘barriers’ to delivering justice. 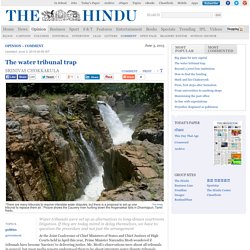 Mr. Modi’s observations were about all tribunals in general, but most media reports understood them to be about interstate water dispute tribunals. Indeed, it was a reflection of a certain continuity in thinking for some time. At the moment, there are multiple tribunals in place to resolve interstate water disputes, but the National Water Policy 2012 proposed setting up a permanent tribunal to replace them. Extraordinary Case Study. The Kesavananda Bharati Case T.R. 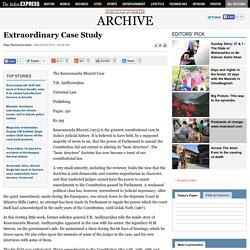 Andhyarujina Universal Law Publishing Pages: 150. NGOs facing a funding challenge. New Delhi: The not-for-profit sector has been hitting the headlines—whether for the offloading of an Indian Greenpeace activist from an international flight or the cancellation of 1,100-plus funding licences in Andhra Pradesh last month. 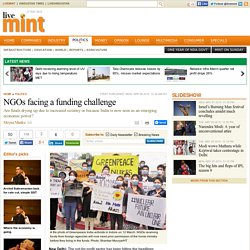 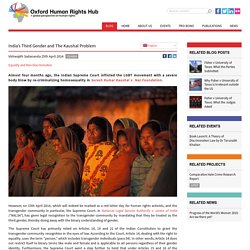 Union of India (“NALSA”), has given legal recognition to the transgender community by mandating that they be treated as the third gender, thereby doing away with the binary understanding of gender. The Supreme Court has primarily relied on Articles 14, 19 and 21 of the Indian Constitution to grant the transgender community recognition in the eyes of law. According to the Court, Article 14, dealing with the right to equality, uses the term “person,” which includes transgender individuals [para 54]. In other words, Article 14 does not restrict itself to binary terms like male and female and is applicable to all persons regardless of their gender identity. 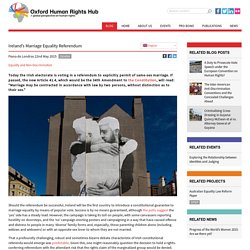 Success is by no means guaranteed, although the polls suggest the ‘yes’ side has a steady lead. However, the campaign is taking its toll on people, with some canvassers reporting hostility on doorsteps, and the ‘no’ campaign erecting posters and campaigning in a way that have caused offence and distress to people in many ‘diverse’ family forms and, especially, those parenting children alone (including widows and widowers) or with an opposite-sex lover to whom they are not married. Striking down of Section 66A of IT Act 2000 - What are the current restrictions on posting offensive comments online? - iPleaders. This article is written by Ayush Agarwal, a student of UPES, Dehradun. 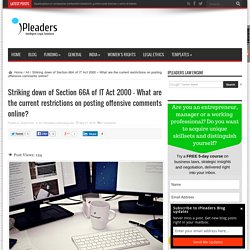 Celebrations mainly among the social networking tweets were at peak with the Supreme Court striking of Section 66A of the constitution of India. Hang on, restrictions still exists, 66A is a history now. Arvind Subramanian bats for rate cut, simple GST. New Delhi: The government’s proposal to allow manufacturing states to levy a 1% additional tax on supply of goods could undermine the ‘Make in India’ programme by encouraging imports rather than the inter-state movement of goods that the goods and services tax (GST) had been envisaged to facilitate, chief economic advisor Arvind Subramanian has warned. 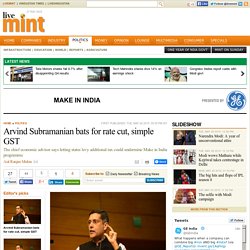 At a press briefing on Tuesday, he also made out a strong case for an interest rate cut, given the visible improvement in the macroeconomic outlook. “GST is a destination-based tax. This (1% additional tax) is an origin-based tax. The puzzle of liberal democracy. Nearly two decades ago, the political commentator Fareed Zakaria wrote a prophetic article called The Rise of the Illiberal Democracy, in which he worried about the rise of popular autocrats with little regard for the rule of law and civil liberties. 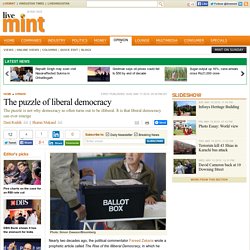 Governments may be elected in free and fair elections, he wrote, and yet routinely violate their citizens’ basic rights. Narendra Modi government’s first year in power in nine charts. Prime Minister Narendra Modi completes a year in office next week following a historic election victory in 2014 in which the Bharatiya Janata Party (BJP) won the majority of seats in the Lok Sabha. Commentators are divided on whether it has been a successful year or not. Others are fighting over whether one year is enough to judge performance of the BJP-led National Democratic Alliance (NDA) government. The puzzle of liberal democracy. Internet companies shouldn’t try censorship. PayPal blocked an account set up by Russian activists seeking to collect funds for the publication of a report on Russia’s involvement in eastern Ukraine. The US online payment company explained that it didn’t “provide the option of using its system to receive donations to political parties or causes in Russia”.

It’s just the latest example of an Internet firm cast in a role for which it is ill-equipped. Companies such as Google, Twitter, Facebook and even PayPal are ruling on matters of free speech. The decisions are made by business executives, who are essentially performing the function of editors in traditional media. But their organizations aren’t professional media: They are conduits for other people’s content, products and money, and their ability to make value judgments should be as limited as a water company’s power to shut off service on a whim. Whom do you trust? The current argument over the National Judicial Appointments Commission (NJAC) is likely to weaken institutional credibility further. On the surface, it seems like a reasonable process. The legislature proposes a new way of selecting judges; the judiciary scrutinises it for its constitutionality and likely ability to uphold judicial independence.

But this surface dialogue has been fraught with mutual constitutional accusation. Modi's social security schemes are old wine in new bottles. The government doesn't even provide a single paisa for the recently announced insurance and pension schemes but claims ownership. A good businessman is one who will make you part with your money for a product or service and then have you believe that he gave you something worth a lot more for next to nothing.

It isn't as if the National Democratic Alliance doesn't have any achievements to show on their first anniversary this month. DPIR Home Page. Without immigrants, none of us would be here. Preparing for global financial turbulence. The year of great initiatives. Prime Minister Narendra Modi’s first year of foreign policy, which began dramatically with the first ever invite to (and participation of) leaders from the South Asian Association for Regional Cooperation (Saarc) countries to his swearing-in, will end with an equally significant three-nation tour of China, Mongolia and South Korea.

In between, Modi notched up an impressive list of foreign policy “firsts”, including the first to host a US president at the Republic Day celebrations and hold two summits within six months; the first to call for “peace, stability and order” in oceans, outer space and cyberspace; and the first to articulate the need for India to lead the fight against climate change and take responsibility to help counter new threats to global peace and security.

This activism has led to great expectations, especially since foreign policy barely found a mention in Modi’s election campaign. Paytm may not have a dream run as a payment bank. It already has more users than the total number of credit cards issued in India, and is the fastest-growing mobile wallet service. In defence, time for tough decisions. Arun Jaitley and Manohar Parrikar, the government’s first and incumbent Defence Ministers, respectively, perhaps hoped that the pitiful record of their predecessor A.K. Antony, India’s longest continuously serving Defence Minister, would make their task easier. The long walk to water. Concept of marital rape doesn’t apply in India: government. 'Anti-national' Ford Foundation has contributed at least $6 million to Indian government schemes since 2010.