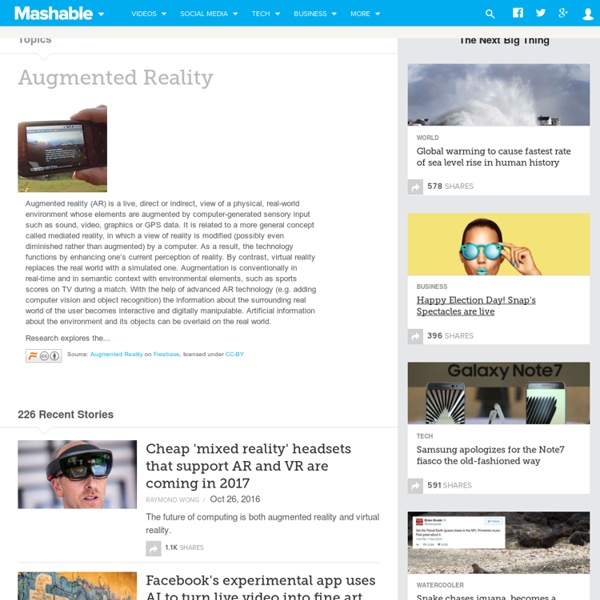 Is Pokemon Go Finally Making Augmented Reality Mainstream? Until Pokemon Go became a viral phenomenon by amassing more than 100 million downloads in a few weeks, augmented reality was confined to tech types and sci-fi fiends. However, thanks to the game, many have now tried AR for the first time, as kids and adults alike roam through town catching digital monsters superimposed on a physical world. "I put this up there with the first time you saw the iPhone, the first time you saw the connectivity and relationship definition of Facebook," said Michael Koziol, president of Huge's office in Atlanta. Pokemon wasn't the first company to try AR—Yelp, Macy's and Starbucks were early adopters, to mixed results—it just ended up being the breakthrough effort. Given its success, naturally other brands and agencies are scrambling to figure out how they might try it. This week, Porsche is unveiling a new augmented reality experience with a five-page, gatefold ad in Outside magazine featuring a photo of the Swiss Alps.

Augmented Reality - What is it? - Virtual Reality Although this site is dedicated to virtual reality, you cannot discuss it without mentioning its very close cousin augmented reality, but what is it? Whereas virtual reality immerses your senses completely in a world that only exists in the digital realm, augmented reality takes the real world of the present and projects digital imagery and sound into it. Augmented and Virtual Reality both fall on the continuum of mediated reality.

The 20 Best Augmented-Reality Apps Augmented reality has long sounded like a wild futuristic concept, but the technology has actually been around for years. It becomes more robust and seamless with each passing decade, providing an astonishing means of superimposing computer-generated images atop a user’s view of reality, thus creating a composite view rooted in both real and virtual worlds. Although AR apps run the gamut, from interactive map overlays and virtual showrooms to massive multiplayer skirmishes, each piece of software hones in on smartphone GPS and camera functionality to create a more immersive experience. The available selection of augmented reality apps is diverse, encompassing both premium and freemium offerings from a variety of big and no-name developers, but sometimes choosing which apps are worth your smartphone or tablet’s precious memory is tougher than using the apps themselves. Here are our top picks for the best augmented reality apps available, whether you’re searching for iOS or Android apps.

The next big thing in tech: Augmented reality - CNET SANTA CLARA, Calif. -- Reality isn't what is used to be. With increasingly powerful technologies, the human universe is being reimagined way beyond Google Glass' photo-tapping and info cards floating in space above your eye. The future is fashionable eyewear, contact lenses or even bionic eyes with immersive 3D displays, conjuring up a digital layer to "augment" reality, enabling entire new classes of applications and user experiences. Like most technologies that eventually reach a mass market, augmented reality, or AR, has been gestating in university labs, as well as small companies focused on gaming and vertical applications, for nearly half a century. Emerging products like Google Glass and Oculus Rift's 3D virtual reality headset for immersive gaming are drawing attention to what could now be termed the "wearable revolution," but they barely scratch the surface of what's to come.

How Augmented Reality Works Video games have been entertaining us for nearly 30 years, ever since Pong was introduced to arcades in the early 1970s. Computer graphics have become much more sophisticated since then, and game graphics are pushing the barriers of photorealism. Now, researchers and engineers are pulling graphics out of your television screen or computer display and integrating them into real-world environments. What is Augmented Reality? Webopedia Definition Main » TERM » A » By Vangie Beal Abbreviated as AR, Augmented Reality is a type of virtual reality that aims to duplicate the world's environment in a computer.

Pokémon Go Brings Augmented Reality to a Mass Audience Pokémon, a hybrid of the words “pocket” and “monsters,” belongs to the Pokémon Company, which is partly owned by Nintendo, the Japanese game pioneer, which has struggled to adapt to the era of gaming on mobile devices like smartphones and tablets. In the cartoon, Pokémon trainers use characters to battle each other for sport. The uptake of Pokémon Go, which is so far available only in the United States, Australia and New Zealand, has been so furious that it sent Nintendo’s market capitalization soaring $9 billion in the last few days. Pokémon Go, though, is actually the work of a start-up, Niantic Inc., which was created inside Google and spun out of the company last year. Niantic’s first game, a science-fiction conspiracy thriller called Ingress, was made possible by Google’s digital mapping service. About 15 million users have downloaded Ingress, and there are a little over one million active players a month, said John Hanke, Niantic’s chief executive.

Augmented reality NASA X38 display showing video map overlays including runways and obstacles during flight test in 2000. Augmented reality (AR) is a live direct or indirect view of a physical, real-world environment whose elements are augmented (or supplemented) by computer-generated sensory input such as sound, video, graphics or GPS data. It is related to a more general concept called mediated reality, in which a view of reality is modified (possibly even diminished rather than augmented) by a computer.

Augmenting Our World - How Augmented Reality Works The basic idea of augmented reality is to superimpose graphics, audio and other sensory enhancements over a real-world environment in real time. Sounds pretty simple. Besides, haven't television networks been doing that with graphics for decades? However, augmented reality is more advanced than any technology you've seen in television broadcasts, although some new TV effects come close, such as RACEf/x and the super-imposed first down line on televised U.S. football games, both created by Sportvision. But these systems display graphics for only one point of view.