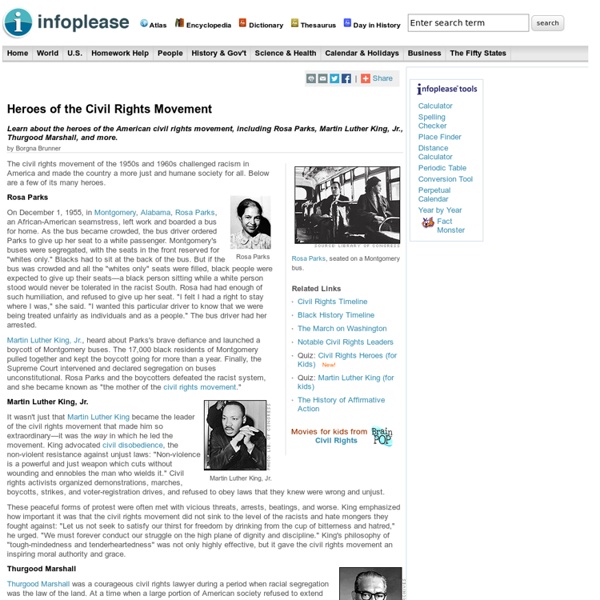 by Borgna Brunner The civil rights movement of the 1950s and 1960s challenged racism in America and made the country a more just and humane society for all. Below are a few of its many heroes. Rosa Parks Rosa Parks On December 1, 1955, in Montgomery, Alabama, Rosa Parks, an African-American seamstress, left work and boarded a bus for home. Martin Luther King, Jr., heard about Parks's brave defiance and launched a boycott of Montgomery buses. Martin Luther King, Jr. Martin Luther King, Jr. It wasn't just that Martin Luther King became the leader of the civil rights movement that made him so extraordinary—it was the way in which he led the movement. These peaceful forms of protest were often met with vicious threats, arrests, beatings, and worse. Thurgood Marshall Thurgood Marshall was a courageous civil rights lawyer during a period when racial segregation was the law of the land. His most important case was Brown v. The Little Rock Nine Although Brown v. Related:  Civil Rights

Strangers This EFL lesson is designed around a beautiful short film called Strangers directed by Erez Tadmor and Guy Nattiv, and the theme of racism. Students predict a story, watch a short film, speak about racism and write a narrative. I would ask all teachers who use Film English to consider buying my book Film in Action as the royalties which I receive from sales help to keep the website completely free. Language level: Intermediate (B1) – Upper Intermediate(B2.11) Learner type:Teens and adults Time: 90 minutes Activity: Predicting a story, watching short film, speaking and writing a narrative Topic: Racism Language: Adjectives to describe character and appearance, and narrative tenses Materials: Short film, discussion questions and anti-racism posters Downloable materials: strangers lesson instructions anti-racism posters racism discussion questions Support Film English Film English remains free and takes many hours a month to research and write, and hundreds of dollars to sustain. Step 1 Step 2 Step 3

Hero The vet whispered, “I hate birthing dead puppies.” The puppy lay lifeless in the palm of his hand. True to his oath he administered CPR and amazingly heard a whimper and then slight breathing. The assistant and vet worked frantically to revive the pup whose chances were very low after twelve long hours lodged behind two dead puppies. Fate smiled on them that day. The team dubbed him Hero, a name worthy of a survivor. Hero’s first owner, a woman in her 70’s, loved him dearly. Large, black older dogs, especially a Rottweiler, are very difficult to place. Hero, the pup Hero suffered from extreme separation anxiety. The more jobs I gave Hero, the more he blossomed. Hero never tires of touching lives, helping the elderly, and bringing a smile to someone’s face. Hero and I receive calls from all over the state. We received a call from Care Alternatives Hospice regarding a patient that was non-responsive to anyone. Hero touches lives from the ages of three to ninety-three.

Martin Luther King | Hero of the Civil Rights Movement Martin Luther King was a great American who worked for civil rights in the United States in the 1950s and 60s. He fought for the rights of African Americans and many people, blacks as well as whites, supported him. In 1964 he received the Nobel Peace Prize. King was born on January 15, 1929 in Atlanta, Georgia. He had a brother, Alfred and a sister, Christine. Both his father and grandfather were ministers. Martin was a very good student. Martin Luther King saw how badly black people were treated and during the 1950s he became involved in the Civil Rights movement. White terrorists started to bomb King’s home and wanted to force him to give up his fight for equal rights. In the 1960s King and his organisation started more and more protest marches and demonstrations. In 1963 Martin Luther King organized a big protest march in Washington D.C. The march was a big success. King also fought against poverty. Martin Luther King’s life came to a sudden end. Related Topics Words

Curtis Mayfield Curtis Mayfield was a masterful songwriter and singer whose words of beauty emitted socially conscious commentaries on a tumultuous period in America's recent history. He was a legend in his own time and his influence on today's music is a testament to his enormous talent. Born in Chicago on June 3, 1942, Curtis Mayfield enjoyed a childhood entrenched with music. He taught himself how to play the guitar and, inspired by his mother's love of poetry, started to develop his own songwriting skills. By the mere age of seven, he was singing in public. He was strongly influenced by a local gospel group, the Northern Jubilee Gospel Singers. While Curtis sporadically performed with The Impressions, he spent his time playing guitar in Jerry Butler's touring band, and provided Jerry with his first R&B hit, "He Will Break Your Heart." Despite some success, Mayfield was not content. The beauty of Mayfield's music was threefold: soulful rhythms, beautifully-crafted melodies and meaningful lyrics.

Freedom’s Ring: King’s “I Have a Dream” Speech Reader Ideas | Teaching the Civil Rights Movement Jeremy M. Lange for The New York TimesThe International Civil Rights Center and Museum opened in 2010 inside a former Woolworth building in Greensboro, N.C. The store was the site of a series of luncheonette “sit-ins” against segregation beginning on Feb. 1, 1960. This month, we asked educators, How Do You Teach the Civil Rights Movement? Many echoed the findings of the Southern Poverty Law Center by writing that this era of history is little taught in their own schools and districts. Just as many educators mentioned the importance of teaching the civil rights movement in the context of African-American history as a whole, since many students bring very little background knowledge to the subject. A comment from John Padula, a Boston middle school teacher, brought together many of the points others raised: I teach grades 6, 7 and 8 in the Boston Public Schools. It’s not too late to add your own thoughts. History, Social Studies, Civics I use a Southern Poverty Law Center documentary. “Yes.”