What’s Wrong with the Constitution? – Medium. (Terry Moe on the Constitution, the Presidency, and Relic) EconTalk Episode #541 (Archive of all episodes, here) SUBSCRIBE TO ECONTALK: iTUNES, SOUNDCLOUD, STITCHER Russ Roberts: Today is July 27, 2016 and my guest is Terry Moe, the William Bennett Munro Professor of Political Science at Stanford University and a senior fellow at the Hoover Institution. 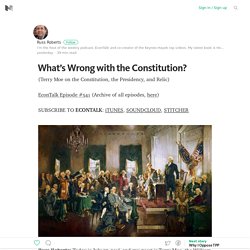 He has written extensively on public bureaucracy and the presidency and his latest book [co-authored with William Howell] is Relic: How Our Constitution Undermines Effective Government and Why We Need a More Powerful Presidency. Listen to the Conversation: So, let’s talk about what’s wrong with the Constitution. Terry Moe: Well, in a way, that’s the point. But we think it’s very important for people to look at the Constitution objectively and ask: How does it affect governance today? This was a time when government wasn’t expected to do much. If James Madison had his way, the Senate would have to veto Merrick Garland rather than confirm him. This undated engraving shows the scene on July 4, 1776 when the Declaration of Independence was approved by the Continental Congress in Philadelphia. 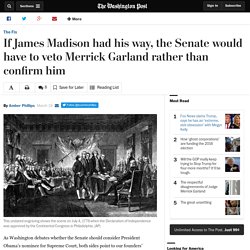 (AP) As Washington debates whether the Senate should consider President Obama’s nominee for Supreme Court, both sides point to our founders’ intentions to make their points. But the writers of our Constitution were arguably just as divided about how the process works (or should work). Over two sweltering July days at the Constitutional Convention in 1787 in Philadelphia, they vacillated about how much power to give Congress and the president over determining who would be justices to the Supreme Court. At one point, it looked as if they had decided to give most — if not all — of the power to appoint justices to the Senate. Through the debate, they had one overarching goal: To find the process most likely to fill the court with the most level-headed, reasonable, least-partisan justices as possible. Campaign 2016 Email Updates Or not. Forget the Constitution. The war over replacing Scalia is about brute political force.

(Andrew Harrer/Bloomberg) In the escalating war over whether Senate Republicans will consider and vote on President Obama’s nominee to replace Antonin Scalia, both sides have cited the Constitution to buttress their positions. 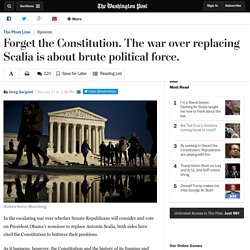 As it happens, however, the Constitution and the history of its framing and ratification do not contain anything that really settles the question at issue: does the Senate have an obligation to consider a president’s nomination if it is made early in an election year? What this really means is that the American people will now be asked to settle the question of what they really believe are the proper obligations of Senate Republicans in this situation. Which is to say, this is a political dispute. And both sides might be just fine with that.

Senator Elizabeth Warren opines that the continued Republican refusal to consider Obama’s nominee will “threaten both the Constitution and our democracy itself.” In other words, there are two, separate battles underway. Obamacare in Texas. Gun Control seized by the Democratic candidates. Gun Control in the USA. Overview of Oregon shooting: Facts and figures about gun control: For the 15th time since taking office, Obama was once again addressing the Nation this week to extend his sympathies following a mass shooting at a community college in Oregon. 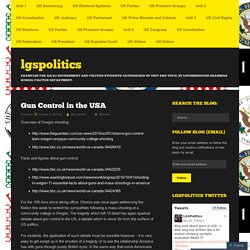 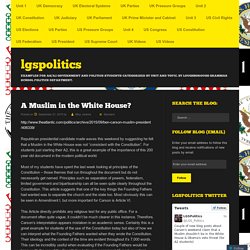 For students just starting their A2, this is a great example of the importance of this 200 year old document in the modern political world. Most of my students have spent the last week looking at principles of the Constitution – those themes that run throughout the document but do not necessarily get named. Principles such as separation of powers, federalism, limited government and bipartisanship can all be seen quite clearly throughout the Constitution. This article suggests that one of the key things the Founding Fathers had wanted was to separate the church and the state too.

Five myths about the Founding Fathers. Newt Gingrich is a former speaker of the U.S. 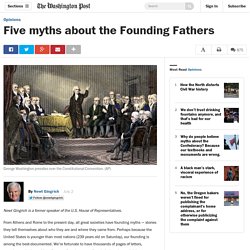 House of Representatives. From Athens and Rome to the present day, all great societies have founding myths — stories they tell themselves about who they are and where they came from. Perhaps because the United States is younger than most nations (239 years old on Saturday), our founding is among the best-documented. We’re fortunate to have thousands of pages of letters, speeches and other writings from our founders, recording their thoughts and debates as they played out. It’s a sign of how politically powerful and historically important the American founding was — and still is — that deeply rooted myths persist today. 1.