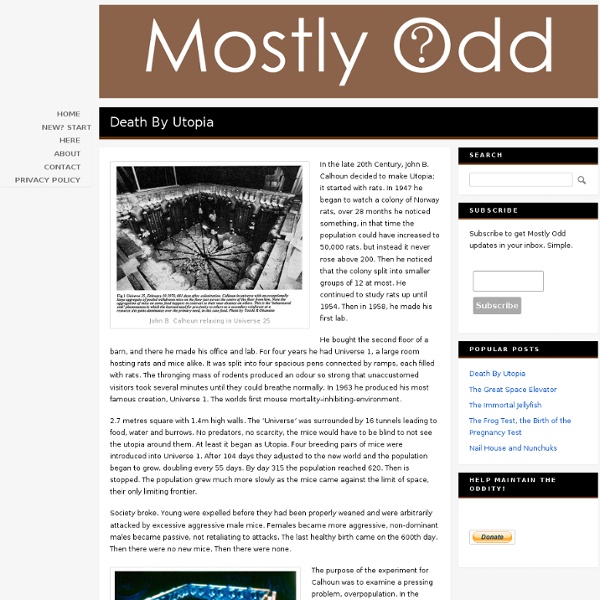 John B. Calhoun relaxing in Universe 25 In the late 20th Century, John B. Calhoun decided to make Utopia; it started with rats. In 1947 he began to watch a colony of Norway rats, over 28 months he noticed something, in that time the population could have increased to 50,000 rats, but instead it never rose above 200. Then he noticed that the colony split into smaller groups of 12 at most. He bought the second floor of a barn, and there he made his office and lab. 2.7 metres square with 1.4m high walls. Society broke. The outside of Universe 25 The purpose of the experiment for Calhoun was to examine a pressing problem, overpopulation. After day 600, the male mice just stopped defending their territory, listless mice congregated in the centres of the Universe. The ‘beautiful ones’ withdrew themselves ever so quietly, removing themselves from the sick society. In the end the population sank, even when it was back down to a tolerable level none of the mice changed back. Further Reading

The Behavioral Sink Cabinet and the author regret that a previous version of this article omitted its sources. To readers who are interested in learning more about Calhoun's research, we highly recommend "Escaping the Laboratory: The Rodent Experiments of John B Calhoun and Their Cultural Influence" by Edmund Ramsden and Jon Adams, LSE Department of Economic History, 2008, to which this article is indebted. How do you design a utopia? In 1972, John B.

Top 10 Things That Determine Happiness photo: meddygarnet Happiness is, by nature, a subjective quality with a definition like a moving target. There is scant evidence — qualitative or quantitative — to lend convincing support to those life variables most critical in determining individual happiness, which is likely why past researchers committed to the scientific method rarely tried to tackle the subject. This is changing. Creepypasta Index My name is Andrew Erics. I lived, once, in a city called New York. My mother is Terrie Erics. She’s in the phone book.

15 Bogeymen From Around The World Creepy The bogeyman is a legendary ghost-like monster. The bogeyman has no specific appearance and conceptions of the monster can vary drastically even from household to household within the same community; in many cases he simply has no set appearance in the mind of a child, but is just an amorphous embodiment of terror. This list looks at 15 bogeymen from around the world.

Queen's diamond jubilee: a vapid family and a mirage of nationhood. What's to celebrate? The mighty royal jubilee bells will toll their way down the Thames on Sunday on a floating belfry leading a thousand boats, echoed by pealing church bells all down the riverside. Who could miss the spectacle of a hundred tall ships serenaded with Handel's Water Music played by a floating orchestra? The more outrageously glorious the performance, the more preposterous its purpose.

9 Mind-Bending Epiphanies That Turned My World Upside-Down Over the years I’ve learned dozens of little tricks and insights for making life more fulfilling. They’ve added up to a significant improvement in the ease and quality of my day-to-day life. But the major breakthroughs have come from a handful of insights that completely rocked my world and redefined reality forever. The world now seems to be a completely different one than the one I lived in about ten years ago, when I started looking into the mechanics of quality of life. It wasn’t the world (and its people) that changed really, it was how I thought of it. Maybe you’ve had some of the same insights.

Why Suicide Has Become an Epidemic WHEN THOMAS Joiner was 25 years old, his father—whose name was also Thomas Joiner and who could do anything—disappeared from the family’s home. At the time, Joiner was a graduate student at the University of Texas, studying clinical psychology. His focus was depression, and it was obvious to him that his father was depressed.

I have had enough of irony The ultimate faux-pas is not laughing at someone's artfully told joke. Especially when it's a huge in-joke, but stuff it! I did not find the Eurovision song contest in any way funny or joyful. Forgive me, for I have sinned against the law of irony. A COURSE IN CONSCIOUSNESS (With last update date) Cover Foreword (August 13, 2009) Do we really give introverts a hard time? 27 March 2012Last updated at 12:50 ET By Vanessa Barford BBC News Magazine In a group situation, it's not necessarily the talkers who have the best ideas It is often assumed extroverts do best in life, but according to a new best-selling book, introverts are just as high achievers. It claims there is a bias towards extroverts in Western society.

Elena Brower: Art of Attention: Remapping Our Minds Love really is a state of equality consciousness: no speculation, no assumptions or opinions. Love is happening when we're relating, directly, to what is happening. Lately I've been learning how to relate directly to my life rather than through my memories or expectations. I'm actively rooting out my expressions of anger by paying $1 for every doubting thought. 40 Belief-Shaking Remarks From a Ruthless Nonconformist If there’s one thing Friedrich Nietzsche did well, it’s obliterate feel-good beliefs people have about themselves. He has been criticized for being a misanthrope, a subvert, a cynic and a pessimist, but I think these assessments are off the mark. I believe he only wanted human beings to be more honest with themselves. He did have a remarkable gift for aphorism — he once declared, “It is my ambition to say in ten sentences what others say in a whole book.”