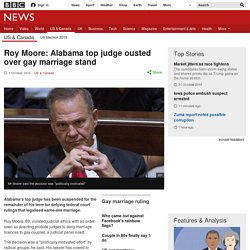 Roy Moore, 69, violated judicial ethics with an order seen as directing probate judges to deny marriage licences to gay couples, a judicial panel ruled. The decision was a "politically motivated effort" by radical groups, he said. Obama: Congress veto override of 9/11 lawsuits bill 'a ... BBC Radio 4 - Letter from America by Alistair Cooke - American institutions explained. DIVIDED WE CONQUER: WHY DIVIDED GOVERNMENT IS PREFERABLE TO UNIFIED CONTROL - International Social Science Review. The question of whether divided government in the United States is good or bad cannot be answered with a simple yes or no. 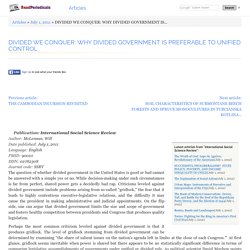 While decision-making under such circumstances is far from perfect, shared power gets a decidedly bad rap. Criticisms leveled against divided government include problems arising from so-called "gridlock," the fear that it leads to highly contentious executive-legislative relations, and the difficulty it may cause the president in making administrative and judicial appointments. On the flip side, one can argue that divided government limits the size and scope of government and fosters healthy competition between presidents and Congress that produces quality legislation. Perhaps the most common criticism leveled against divided government is that it produces gridlock. The level of gridlock stemming from divided government can be determined by examining "the share of salient issues on the nation's agenda left in limbo at the close of each Congress.'" 1 Sarah A. The Constitution Is Outdated; Let's Change It. I got around to watching 12 Years A Slave, the award-winning film about our founding fathers. 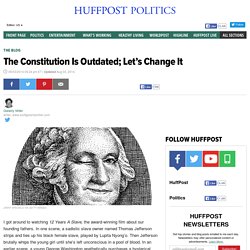 In one scene, a sadistic slave owner named Thomas Jefferson strips and ties up his black female slave, played by Lupita Nyong’o. Then Jefferson brutally whips the young girl until she’s left unconscious in a pool of blood. How racial segregation and political mismanagement led to Flint’s shocking wa... A Point of View: The all-American drive to legalise marijuana. Image copyright Getty Images The gradual legalisation of cannabis across US states is a triumph for the American Dream, says Sarah Dunant. 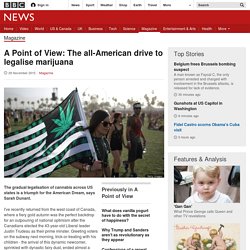 I've recently returned from the west coast of Canada, where a fiery gold autumn was the perfect backdrop for an outpouring of national optimism after the Canadians elected the 43-year-old Liberal leader Justin Trudeau as their prime minster. Greeting voters on the subway next morning, trick-or-treating with his children - the arrival of this dynamic newcomer, sprinkled with dynastic fairy dust, ended almost a decade of Conservative government during which Canada suffered something of an identity crisis. For a country that successfully defined itself as not being the United States, his predecessor's policies on tax, foreign affairs and the environment severely blurred that distinction.

On guns and race, America is a nation shackled to its past. Jon Stewart and Barack Obama are men of a similar age with, on some days, a similar role. 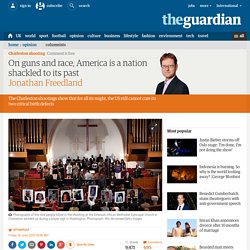 Sometimes it falls to both of them to help their fellow Americans digest what’s happening around them, to make sense of it. Yesterday it was the murder by a white supremacist of nine black churchgoers in Charleston, South Carolina. Nebraska legislature narrowly votes to repeal​ death penalty. The Nebraska legislature narrowly voted on Wednesday to repeal the death penalty, overriding the governor’s veto and making the state the first majority Republican state to abolish capital punishment in more than four decades. 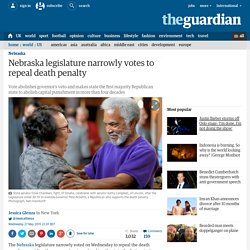 The state has a unicameral legislature in which all bills must be voted on three times. The bill to abolish the death penalty passed all three rounds, 30-16, 30-13, and finally 32-15 in its third vote. The governor vetoed the bill on Tuesday. Legislators needed 30 votes to override the veto, and it earned 30. Nineteen voted against. “In many respects, what has happened in Nebraska is a microcosm of the steady national trend away from the death penalty in the United States,” said Robert Dunham, executive director of the Death Penalty Information Center. Boston bombing trial: Death sentence for Dzhokhar Tsarnaev - BBC News. A US jury has sentenced Boston bomber Dzhokhar Tsarnaev to death by lethal injection. 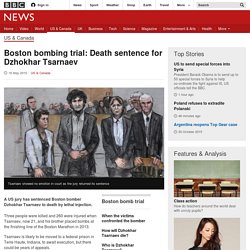 Three people were killed and 260 were injured when Tsarnaev, now 21, and his brother placed bombs at the finishing line of the Boston Marathon in 2013. Tsarnaev is likely to be moved to a federal prison in Terre Haute, Indiana, to await execution, but there could be years of appeals. Victims sobbed as the sentence was read, but Tsarnaev showed no emotion. "Now he will go away and we will be able to move on. Justice. After 14 hours of deliberations, the jury concluded that he showed no remorse and therefore should be put to death. Shaker Aamer: Last UK Guantanamo Bay detainee arrives in UK - BBC News.

The last British resident to be held in Guantanamo Bay has landed in the UK, having been detained for 13 years. 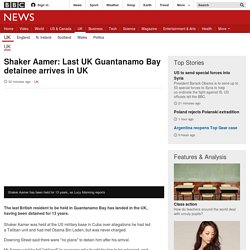 Shaker Aamer was held at the US military base in Cuba over allegations he had led a Taliban unit and had met Osama Bin Laden, but was never charged.