The Guardian view on Brexit ruling. The rule of law is the bedrock of a democratic society. 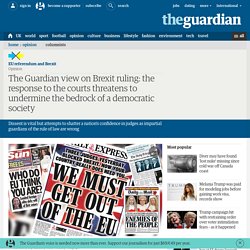 It can check corruption and abuses of power. It permits individuals to order their lives. It allows private corporations, public bodies and the executive to regulate effectively their own activities. If the rule of law is to be upheld, it is vital that there should be an independent judiciary. This fact appears lost on Brexiter rabble-rousers. This is rhetoric that goes beyond character assassination and rightwing posturing into something darker and more dangerous. Theresa May to fight 2020 election on plans to take Britain out of European Convention on Human Rights after Brexit is completed. The EU referendum and some paradoxes of democratic legitimacy. 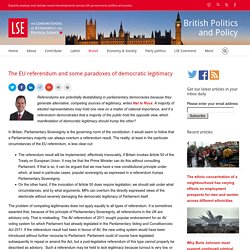 A majority of elected representatives may hold one view on a matter of national importance, and if a referendum demonstrates that a majority of the public hold the opposite view, which manifestation of democratic legitimacy should trump the other? Federalism provides a desirable path forward for the UK’s constitution – and may be the only means of preserving the Union. The UK is soon to decide whether to maintain its membership of the European Union, with only two years having elapsed since the referendum on Scottish independence. 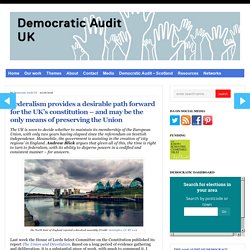 Meanwhile, the government is assisting in the creation of ‘city regions’ in England. Andrew Blick argues that given all of this, the time is right to turn to federalism, with its ability to disperse powers in a codified and consistent manner – for answers. Last week the House of Lords Select Committee on the Constitution published its report The Union and Devolution. The democracy bomb: Brexit and the need for a written constitution. Brexit may have aborted the careers of David Cameron, George Osborne, and all the main Brexit leaders. 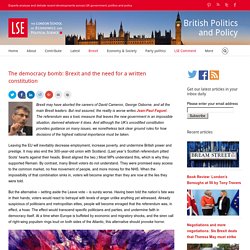 But rest assured, the reality is worse writes Jean-Paul Faguet. The referendum was a toxic measure that leaves the new government in an impossible situation, damned whatever it does. And although the UK’s uncodified constitution provides guidance on many issues, we nonetheless lack clear ground rules for how decisions of the highest national importance must be taken. Leaving the EU will inevitably decrease employment, increase poverty, and undermine British power and prestige. It may also end the 300-year-old union with Scotland. To appreciate the importance of the Brexit referendum, we must consider the series of constitutional issues that it raises. The Brexit referendum, set to take place in June, has created open divisions in the Conservative Party, with many questioning the sustainability of two warring tribes within the same one-party government. 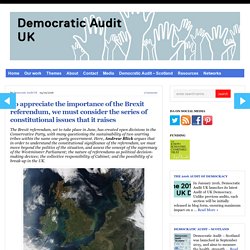 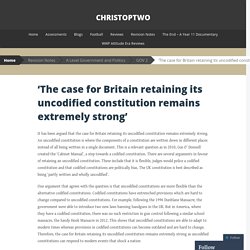 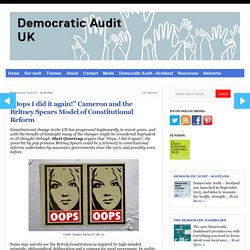 Matt Qvortrup argues that “Oops, I did it again”, the 2000 hit by pop princess Britney Spears could be a leitmotif in constitutional reforms undertaken by successive governments since the 1970, and possibly even before. Credit: Stephen Harlan CC BY 2.0 Some may naively see the British Constitution as inspired by high-minded principle, philosophical deliberation and a concern for good governance.

In reality the process of constitutional reform has followed a pattern of opportunism and hastily enacted changes. Many of these have had unintended and unforeseen consequences, and others have even back-fired.

The Conservative win will chip away at Britain’s once-sturdy constitution. Politically, the election’s outcome was far more decisive than predicted; constitutionally, it was anything but. 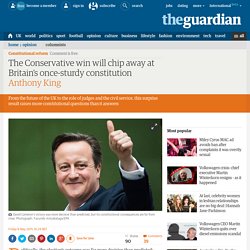 It has raised far more questions than it answered. The sturdy old British constitution – with power throughout the UK both concentrated and centralised – already lay in ruins. It looks as though new bombs may be about to be dropped on it. Constitutional conventions. Sources of the constitution. The Independent guide to the UK constitution: How is the right to govern conf... This year, we were led to expect a more confused picture, with the SNP as the third party and the Liberal Democrats reduced to a rump, so that it might have been necessary for three or even four political parties to strike up a deal before anyone could claim to have a working majority. 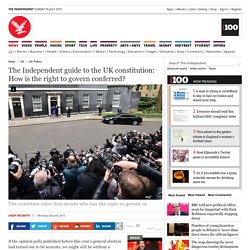 In the end, this was all academic. Unless there is some major convulsion inside the Conservative Party, or a long string of by-election defeats, they are securely in office until May 2020. That date is fixed because the one major constitutional change which the Coalition government got on to the statute books was the Fixed Term Parliament Act (2011), which decrees that unless there is a major crisis, there will always be five years between one general election and the next. Lord Salisbury, left, devised the unwritten Salisbury Convention, which is now interpreted as meaning that the Lords will never try to vote down a measure that was included in the ruling party’s election manifesto (Getty)