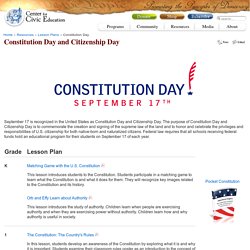 Most students can identify George Washington, James Madison, and maybe even Alexander Hamilton. But what about the other fifty-two delegates? Who were they? How did they influence the convention? To Amend or Not to Amend, That's Been the Question…Many Times This lesson asks students to examine recent proposed amendments to the U.S. How Was the Constitution Used to Organize the New Government? This lesson explains the five major accomplishments of the first Congress. Teacher Audio. Interactive Constition - National Constitution Center. America Gets a Constitution Video - The U.S. Constitution. You're almost done! 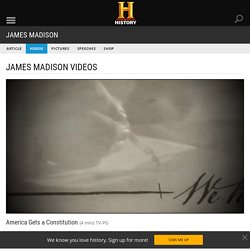 You will soon receive an activation email. Once you click on the link, you will be added to our list. If you do not receive this email, please contact us. To ensure delivery to your inbox, add us to your address book. Oops, there's a problem. This email address has previously opted out from receiving any emails from HISTORY and/or A+E Networks. The Bill of Rights - activity and 15 min vid. Air Date: December 2013 Live Chat: December 9, 2013, 7am-6pm EST Runtime: 15:00 Civic Holiday: Bill of Rights Day Explore the compelling story of our Constitution’s first ten amendments, from James Madison’s efforts to compile a list of essential freedoms, through the years when the document’s provisions were seldom applied, to present-day court cases that impact all Americans. 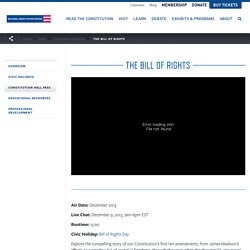 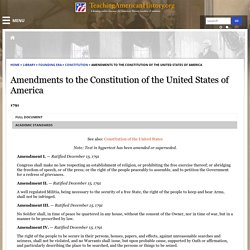 Primary Sources Teacher Guide - Library of Congress. Which Founder Are You? The U.S. 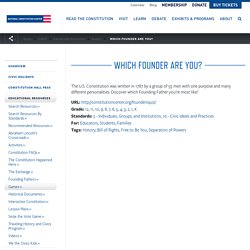 Constitution was written in 1787 by a group of 55 men with one purpose and many different personalities. Discover which Founding Father you're most like! School House Rock -The Preamble. National Constitution Center-The Colbert Report. Simplified Constitution and Bill of Rights. This webpage came about because of a lesson I teach at school on how our government functions. 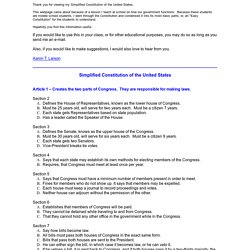 Because these students are middle school students, I went through the Constitution and condensed it into its most basic parts, or, an "Easy Constitution" for the students to understand. Hopefully you find this information useful. If you would like to use this in your class, or for other educational purposes, you may do so as long as you send me an e-mail. Constitution of the United States - National Archives.