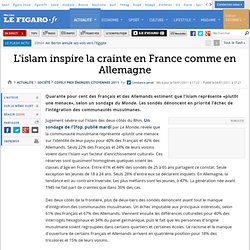 Several months ago, I was informed by my contacts in the Iranian Revolutionary Guard that the Basij had started work on a film that had the approval of Ayatollah Ali Khamenei and Mahmoud Ahmadinejad. 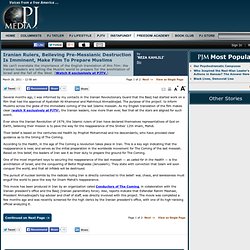 The purpose of the project: to inform Muslims across the globe of the immediate coming of the last Islamic messiah. As my English translation of the film makes clear (watch it exclusively at PJTV), the Iranian leaders, now more than ever, feel that all the stars are aligned for such event. Ever since the Iranian Revolution of 1979, the Islamic rulers of Iran have declared themselves representatives of God on Earth, believing their mission is to pave the way for the reappearance of the Shiites’ 12th imam, Mahdi. Their belief is based on the centuries-old Hadith by Prophet Mohammad and his descendants, who have provided clear guidance as to the timing of The Coming.

According to the Hadith, in the age of The Coming a revolution takes place in Iran. Dernières nouvelles des Philippines, Nouvelles rupture, vidéo, analyse, Caractéristiques. MANILA, Philippines - Migrant Filipinos are synonymous with the word trouble in Malaysia's Sabah state, according to a from the US embassy in Kuala Lumpur that was released by on Wednesday. Masidi Manjun, Sabah's Minister of Youth and Sports, told US diplomats in Malaysia that his state was "flooded with foreigners" and "singled out Filipino Muslims from Mindanao as 'especially troublesome.'" Manjun claimed that the Filipinos were "using our [Malaysia's] social services and not integrating into society," and that "vagrancy and violence" were rampant within Sabah's Filipino community, according to the diplomatic cable dated October 10, 2006 that was deemed classified by US embassy political section chief Mark D. 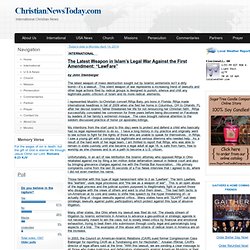 This silent weapon of war represents a increasing trend of lawsuits and other legal actions filed by radical groups is designed to punish, silence and chill any legitimate public criticism of Islam and its more radical elements. I represented Muslim- to-Christian convert Rifqa Bary, pro bono in Florida. Rifqa made international headlines in fall of 2009 when she fled her home in Columbus, OH to Orlando, FL after her devout Islamic father threatened her life for not renouncing her Christian faith.

My intentions from the start (and to this day) were to protect and defend a child who basically had no legal representation to do so. Those familiar with this type of legal harassment refer to it as “Lawfare”. Many other states, like Ohio where my lawsuit was filed do not. Zombie Â» The Five Best Arguments Against Sharia in the United States. I shouldn’t have to write this essay. 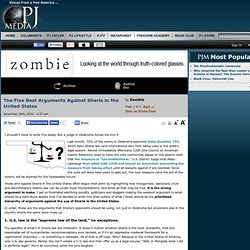 But a judge in Oklahoma forced me into it. Last month, 70% of the voters in Oklahoma approved State Question 755, which bans Sharia law (and international law) from being used in the state’s legal system. Almost immediately afterward, CAIR (the Council on American-Islamic Relations) sued to have the vote overturned, based on the bizarre claim that the measure is “unconstitutional.” U.S. District Judge Vicki Miles-LaGrange then sided with CAIR and issued an injunction preventing the measure from taking effect until all lawsuits against it are resolved. Those who oppose Sharia in the United States often argue their point by highlighting how misogynistic, backward, cruel and discriminatory Islamic law can be under most interpretations. In order, these are the arguments that Sharia’s opponents should be using, not just in Oklahoma but anywhere else in the country where the same issue crops up: 1.