What Does Jihad Actually Mean? Migrants articles. Islam, Israel and the Czech Republic. "A shocking assault took place in the centre of the city of Olomouc. 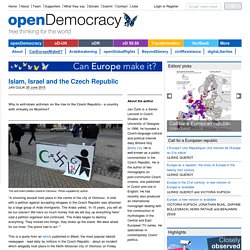 A stall with a petition against accepting refugees in the Czech Republic was attacked by a large group of Arab immigrants. The Arabs yelled, ‘In 15 years, you will all be our slaves!! We have so much money that we will buy up everything here!’ Said a petition organiser and continued, ‘The Arabs began to destroy everything. They kicked into things, they broke up the stand. This is a quote from an article published in Blesk, the most popular tabloid newspaper - read daily by millions in the Czech Republic - about an incident which allegedly took place in the North Moravian city of Olomouc on Friday 29th May. But was it true? "A group of foreign students, with whom there have never been any problems before, expressed their disagreement with a xenophobic petition. Other witnesses have also testified that there was no violence. The group is openly tolerated by Facebook, where it has received more than 138,000 likes.

The Meaning of Jihad. We will start our study of jihad by investigating the general meaning of this term in the Arabic language and its special meaning in the Qur’an. 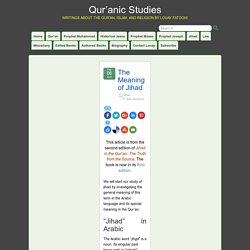 The Arabic word “jihad” is a noun. Its singular past tense verb is “jahada” (masculine) or “jahadat” (feminine). The singular active participle of “jihad” is “mujahid” (masculine) or “mujahida“(feminine). The root of the word “jihad” is “juhd” which means “effort.” Another related word is “ijtihad“which means “working hard or diligently.” Jihad is simply the process of “exerting the best efforts,” involving some form of “struggle” and “resistance,” to achieve a particular goal.

Contrary to common belief, the word “jihad” does not necessarily imply any violent effort, let alone “war” and such instances of extreme violence. History Net: Where History Comes Alive – World & US History Online. Present-day Middle Eastern leaders have invoked the concept of jihad, often incorrectly, to inflame Muslims — such as these Shia fighters during the Iran-Iraq War — to war against all "idolaters. 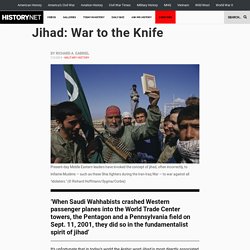 " (© Richard Hoffmann/Sygma/Corbis) ‘When Saudi Wahhabists crashed Western passenger planes into the World Trade Center towers, the Pentagon and a Pennsylvania field on Sept. 11, 2001, they did so in the fundamentalist spirit of jihad’ It’s unfortunate that in today’s world the Arabic word jihad is most directly associated with heinous terrorist acts committed by Islamic extremists who either don’t know or don’t care about the word’s origin and true meaning. The doctrine of jihad, or holy war, was Muhammad’s principal military legacy. It is indisputable that divinely justified warfare became a force of major importance during the early Islamic period, was a significant motivator for the Muslim conquests that followed Muhammad’s death in 632 and remains a primary characteristic of Islamic warfare. Islamic Jihad (History) Jihad vs. Crusade - Holy Wars in Comparative Perspective. Prague Cancels Christmas Tree Lighting Ceremony, Prague - Czech Republic.

Prague’s Old Town Square will start to celebrate the Christmas season this Saturday, when a 23-meter Norway spruce aged at over 50 years will be erected in the historic locale. 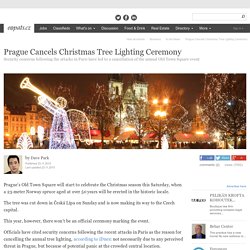 The tree was cut down in Česká Lípa on Sunday and is now making its way to the Czech capital. This year, however, there won’t be an official ceremony marking the event. Officials have cited security concerns following the recent attacks in Paris as the reason for cancelling the annual tree lighting, according to iDnes: not necessarily due to any perceived threat in Prague, but because of potential panic at the crowded central location.

“We are not afraid of a terrorist attack, but rather a panic in the event that someone would abuse the situation,” said markets spokesperson Hana Tietze. Instead of an official ceremony, the tree will be quietly erected on Saturday, and lit up each hour to the rhythm of music. “FEAR OF ATTACK: Islamic State destroys traditional Czech Christmas!” DOES ISLAM PROMOTE VIOLENCE.