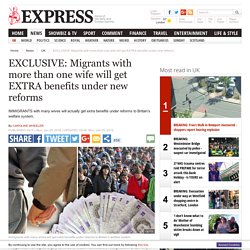 At present additional wives can receive reduced individual income support, meaning the husband and his first wife receive up to £114.85. Subsequent spouses living under the same roof receive a reduced allowance of about £40 each. Under the new system of universal credit, polygamous marriages are not recognised at all. But a House of Commons library paper, published earlier this month, has highlighted a loophole that will allow additional wives to claim a full single person’s allowance while the husband and his first wife still receive theirs. This could mean some polygamous households will receive more under universal credit than under the present benefit and tax credit system, the paper said.

“The Government decided that the universal credit rules will not recognise additional partners in polygamous relationships,” the paper states. Multiple wives will mean multiple benefits - Telegraph. New guidelines on income support from the Department for Work and Pensions (DWP) state: "Where there is a valid polygamous marriage the claimant and one spouse will be paid the couple rate ... 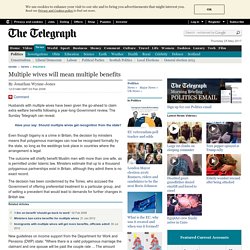 The amount payable for each additional spouse is presently £33.65. " Income support for all of the wives may be paid directly into the husband's bank account, if the family so choose. Under the deal agreed by ministers, a husband with multiple wives may also be eligible for additional housing benefit and council tax benefit to reflect the larger property needed for his family.

The ruling could cost taxpayers millions of pounds. Ministers launched a review of the benefit rules for polygamous marriages in November 2006, after it emerged that some families had benefited financially. The review concluded in December last year with agreement that the extra benefits should continue to be paid, the Government admitted. 11yo amputee dies after ‘numerous beatings’ at Islamic school in Malaysia.

A Malaysian boy who had both legs amputated after allegedly being repeatedly beaten by an assistant warden at a private religious school has died. 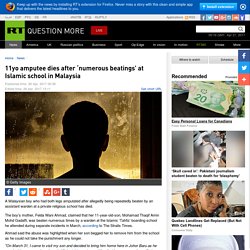 The boy's mother, Felda Wani Ahmad, claimed that her 11-year-old-son, Mohamad Thaqif Amin Mohd Gadaffi, was beaten numerous times by a warden at the Islamic ‘Tahfiz’ boarding school he attended during separate incidents in March, according to The Straits Times. Ahmad said the abuse was highlighted when her son begged her to remove him from the school as he could not take the punishment any longer. "On March 31, I came to visit my son and decided to bring him home here in Johor Baru as he was looking very weak and worried," she told reporters, adding that her son was also suffering from a fever as a result. In addition, Gadaffi suffered blood clots in both his legs which led to them being amputated in an operation at the Sultan Ismail Hospital (HSI) on Friday.

This, in turn, led to the young boy falling into a coma. Macron: Merkel's Open Door Migrant Policy 'Saved Our Dignity' Macron affirmed that even after the Islamic State attack in Berlin, committed by Tunisian migrant Anis Amri, he supports the migrant policy of Chancellor Merkel. 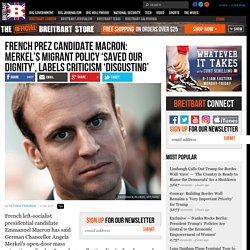 Expressing his admiration for Germany, he told German newspaper Süddeutsche Zeitung, “Chancellor Merkel and the whole of German society were at the same level of our [French] common values. They saved our collective dignity, by accepting, accommodating, and educating distressed refugees.” The former economy minister, who announced his presidential candidacy in mid-December, added it was a “disgusting simplification” when Merkel was accused of surrendering her own capital and the whole of Europe with the admission of over one million migrants from the Middle East and Africa.

In response to questions of securing the continent against terrorism, Macron called for more European Union (EU) integration, including an expansion of the European Border Agency. Muslim Avoids Jail For Anally Raping Teen Because He “Couldn’t Understand No” » Alex Jones' Infowars: There's a war on for your mind!

Despite his 14-year-old victim repeatedly saying “no,” a Muslim migrant won’t face rape charges because the court claimed he had “difficulties in interpreting” the word “no.” 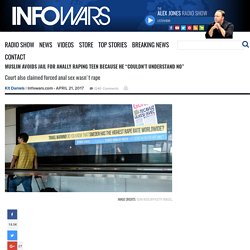 The Hovrätten (royal court) of Western Sweden said the Iraqi, who had former convictions, had “suspected ADHD,” which, according to the court, gave him “difficulties in interpreting and interacting with other people as well as recognizing the standards he is expected to live up to.” This despite video evidence of the girl resisting and repeatedly saying “no” during the sexual assault – and despite evidence indicating the girl was blackmailed by the migrant who reportedly threatened to harass her family. The court sided with the migrant even further by suggesting the girl’s repeated “no” only pertained to forced anal sex, which the judges somehow did not consider rape.

The incident occurred on Oct. 4, 2016 in Gothenburg at Abdul’s own apartment, but it wasn’t reported how the girl got there in the first place. How Islam progressively takes over countries. By Mark Ellis In Dr. 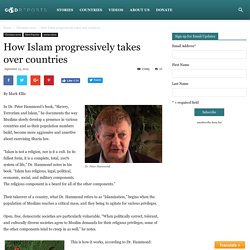 Peter Hammond’s book, “Slavery, Terrorism and Islam,” he documents the way Muslims slowly develop a presence in various countries and as their population numbers build, become more aggressive and assertive about exercising Sharia law. “Islam is not a religion, nor is it a cult. In its fullest form, it is a complete, total, 100% system of life,” Dr. Muslim behavior/terrorism correlated with population size. I received this email from someone, and I am passing it along. 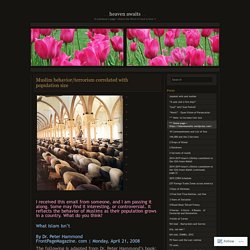 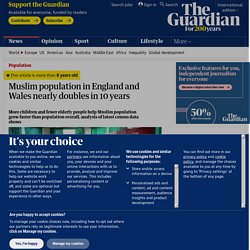 One in three Muslims is under 15, compared with fewer than one in five overall. There are also fewer elderly Muslims, with 4% aged over 65, compared with 16% of the overall population. Pamela Geller: Immediately After Muslim Mayor Elected, London’s Iconic Buses Proclaim “Glory To Allah” It’s a sign of the times – and a sign of things to come. 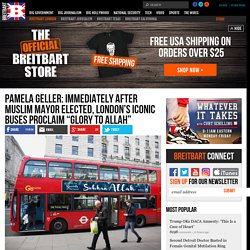 Is anyone really surprised? That a man such as Sadiq Khan, who has shared a platform with open Jew-haters, could still be elected mayor of London, is an indication of how far gone Britain already is. AP translates Fresno shooter's 'Allahu Akbar' to 'God is great' Muslim Teacher Arrested For Molesting Little Girl... Uses 4 SICK Words As An Excuse. Primary School Teacher Quits After Muslim Students Threaten to Behead Her - The Blazing Press. A primary school teacher in Australia recently quit her job after the Muslim children threatened to behead her. 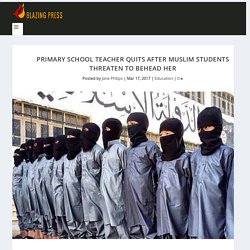 Via Heat Street: Teachers at a primary school in Sydney, Australia have been threatened with beheading and other violence from young Islamic students, prompting one of them to quit her job.Students as young as those in Year 5, according to the Daily Telegraph, are making the violent threats and pressuring others to read the Koran at Punchbowl Public School in Sydney.Documents given to the newspaper allege that three staff members have taken a leave of absence owing to stress, received counselling and been awarded compensation after bullying from Islamic students.One female teacher reportedly quit her job after it got too much for her.

NJ Teacher Blames Having Sex With Children On 'Strict Muslim Upbringing' ⋆ Silence is Consent. Islamic teacher who sexually abused girl, 11, spared jail because he's on benefits. Suleman Maknojioa, 40, squeezed girl's chest under her prayer scarfAttacks took place as he gave lessons in Arabic to girl and her brothersFather of six convicted of five counts of sexual activity with a childHe was handed a suspended sentence after judge told family rely on him By Daily Mail Reporter Published: 09:06 BST, 18 March 2014 | Updated: 01:44 BST, 19 March 2014. Muslim Teacher Caught Abusing Children, Judge Excuses It With 4 SICK Words. A Muslim teacher took discipline too far after confusing where his authority ends.

Unfortunately for him, he was caught red-handed while abusing children, but the situation would only be made worse by a judge when he excused the shocking behavior with 4 sick words. Mohammed Karamat is an imam at the Noorul Islam Jamia Mosque in Coventry, England, but many are saying that he should be removed from his position. According to reports, several incidents of abuse have surfaced, and they all center around children. Recently, police began to investigate the Muslim man only to find shocking evidence of the purported crimes. Catching him red-handed, police found video footage of Karamat twisting a child’s arm, slapping a child, and using a pen to stab a child. Liberal Teacher Takes In Muslim Refugee, His Colleague Finds What's Left Of Him. A leftist professor decided to put into practice his own liberal “open doors” policy, feeding and housing a poor refugee in his own home. However, when his colleague showed up to find out why he wasn’t at work, he found a stomach-churning trail that’s enough for anyone to abandon their progressive “multicultural” beliefs.

A high school math teacher from Celle, a city near Hanover, Germany, foolishly bought into the propaganda that Muslim asylum seekers can be won over with Western hospitality and tolerance. OMG! Radical Muslim Teacher PISSED After Getting Fired…What Parents Found On Her Social Media Is OUTRAGEOUS! – The Washington Feed. A preschool teacher was recently arrested in Texas, after calling for violence against entire minority groups on social media. The religion of peace strikes again. Every word of this is true. A teacher in Texas has been tweeting the worst kinds of anti-Semitic racism, and openly calling for the murder of anyone not a Muslim. And liberals want you to believe that Islam doesn’t promote these things. And it’s a pre-school teacher, hiding in plain sight. 27 men and 2 women in court in child sex and neglect case. Amere Singh Dhaliwal, 34, of Huddersfield is charged with 54 offences. He is charged with 21 counts of rape, 14 counts of trafficking, as well as inciting a child to engage in sexual activity, sexual assault, sexual touching, possession of indecent images of a child, racially aggravated assault and inciting a child into prostitution.

Raj Singh Barsran, 33, of Huddersfield. He is charged with sexual touching and rape. Abdul Rehman, 29, of Sheffield. He is charged with rape, trafficking, supplying drugs, supply of a controlled substance with intent to engage in sexual activity and sexual touching. Nasarat Hussain, 28, of Huddersfield. Irfan Ahmed, 32, of Huddersfield. Zubair Ahmed, 30, of Huddersfield. MUSLIM LONDON MAYOR VISITS CHICAGO, PUSHES SHARIA LAW. Daily Wire. At an event in New York City called “Building Progressive, Inclusive Cities,” Sadiq Khan, London’s London mayor, met with his counterpart in the Big Apple, far-left Mayor Bill de Blasio, and explained that urban dwellers should simply get used to jihadist rampages. 24 Huddersfield men and 2 women in court today over charges of rape, neglect and sex abuse on girls as young as 11.

The 29 men and women charged with dozens of historic sexual offences against girls are appearing at Kirklees magistrates court today. Muslim Tesco cashier refuses to sell wine because it was 'against her religion' Election fraud allowed to take place in Muslim communities because of 'political correctness', report warns. UK: Voter ID Passed to Combat Epidemic of Vote Fraud in Muslim Areas. The Hijrah Into Europe. Approximately 104,460 asylum seekers arrived in Germany during the month of August, setting a new record. That makes 413,535 registered refugees and migrants coming to Germany in 2015 so far. 'Seven out of ten migrants make it through Channel Tunnel', says Kent Chief Constable Alan Pughsley. Seven out of ten migrants attempting to reach the UK through the Channel Tunnel are successful, a police chief has said. French police smash Paris migrant camp as immigrants vow Britain will become home. Migrants move into new £6million Paris 'bubble' next to the Eurostar.

The town in Bosnia where only Arabs are allowed to live. Islam’s child brides: girls young enough to be in pre-school who are married off to older men. Children being groomed for sex abuse in EVERY town in the country. Leaders of town dubbed 'Britain's child sex capital' accused of whitewashing own inquiry. Telford gang is jailed for sexually abusing girls. The British child brides: Muslim mosque leaders agree to marry girl of 12... so long as parents don't tell anyone. Pamela Geller: Shocking New Details Emerge in Idaho Muslim Migrant Rape Case.