American Muslims Raise Money for San Bernardino Victims As a Way to “Respond to Evil with Good” Thank you for your interest in Patheos newsletters! 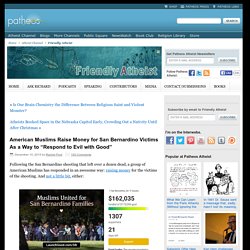 Please enter your email address below and click the "Subscribe" button. Thank you for your subscription. You can visit your Preference Center to complete your profile and see what else we have to offer. We apologize, we were unable to complete your subscription at this time, please try again later. If this error persists please contact us at communications@patheos.com. Similarities Between Christianity Right And Sharia Islam.

I find it strange when Christian Conservatives post anti-Islamic stuff on their timelines and pages because they follow pretty much the same religion. 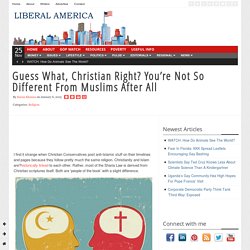 Christianity and Islam are? Historically linked to each other. Rather, most of the Sharia Law is derived from Christian scriptures itself. Both are ‘people of the book’ with a slight difference. Christianity and Islam are similar religions. Let’s have a look at the similarities between the two religions: Both of them suggest women must be submissive to their husbands: According to Christianity, women should be submissive to men. Both of them justify marital rape: According to Christianity, a man has every right over her wife’s body and a wife should never deprive her husband of his desires except in a few situations (e.g. when fasting or pregnant). U.S. Muslims see increased backlash—as in shots fired at mosques—in wake of Paris attack. Is it any wonder that—during a presidential primary in which the GOP frontrunner launched his campaign with a platform of targeting immigrants and is now calling for U.S. mosques to "absolutely" be shut down—members of American mosques are finding feces at the entrances? 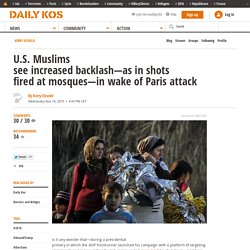 In a suburb of Austin, Texas, leaders of the Islamic Center of Pflugerville on Monday discovered feces and torn pages of the Quran that had been thrown at the door of the mosque. Islamic advocates say they are used to seeing anti-Muslim actions in the wake of events like Paris, but they believe media-fueled anti-Muslim sentiment is causing an even bigger spike than usual. "The picture is getting increasingly bleak," said Ibrahim Hooper, a spokesman for the Washington, D.C. -based Council on American-Islamic Relations. "There's been an accumulation of anti-Islamic rhetoric in our lives and that I think has triggered these overt acts of violence and vandalism. " Bhatti said the shooting has not rattled mosque members. Saudi Cleric: In Heaven, the Virgins’ Breasts Are Like Pomegranates. Storm of paranoia and hate erupts in Florida town after photo shows Muslims praying at beach.

A photo taken by a Florida county commissioner of a group of men observing their Muslim faith has ignited a racist backlash that spilled over into a recent government meeting, WTXL reports. 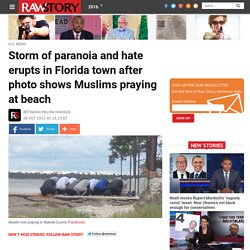 The photo was taken at Mashes Sands Beach in Wakulla County by county commission chairman Ralph Thomas and posted to his Facebook page with the caption, “Walked up on this at Mashes Sands this evening! First time seeing this in Wakulla County.” The photo has sparked an emotional storm that has included death threats. “I’m raising the question of whether or not a group of military aged Muslim men… are praying on our beach, well label me whatever you want,” said Wakulla County Sheriff candidate Will Dance, according to WTXL. Muslim leader Imam Amro was interviewed by WTXL and assured people that in general, no Muslim would retaliate against anyone not wearing modest clothes because it’s none of their business. Devout Muslims pray five times a day facing Mecca, which is what the picture seems to portray. Texas GOP Group Promotes Blog Stating 'Islam Is A Satanic Cult Of Murder'

WATCH As A Young Boy Perfectly Shuts Down A Homophobic Street Preacher (Video) Imagine you’re in the town square of where you live and there just happens to be a loud, obnoxious street preacher spewing out hate directed at homosexuals. 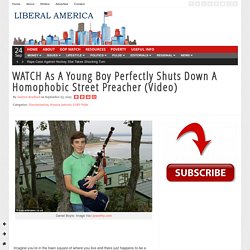 What do you do? Keep walking? Confront the narrow-minded bigot? Well, if you live in Fife, Scotland, you do the most Scottish of things: You grab your bagpipes and drown out the idiot. In the video below, you’ll see the bigoted preacher yelling into a megaphone, screaming about how gay marriage is ruining the economy. Young Daniel, clearly satisfied with a the public service he has provided, then completes his victory lap around the street’s fountain before returning to his original spot.

And perhaps best of all, the police also arrived and told the street preacher that he was disturbing the peace by using an amplifier to spread his hateful message. Mission accomplished in the most Scottish of ways. Watch Daniel Drown Out the Hate h/t AddictingInfo. Texas GOP Group Promotes Blog Stating 'Islam Is A Satanic Cult Of Murder'