Palestinian Historian: 'There Was Nothing Called a Palestinian People' Rather than accepting history and living with it, Palestinian leader Abbas chooses to invent facts, thus perpetuating the Palestinian war against Israel’s existence. 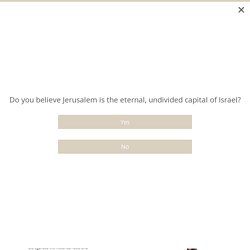 Palestinian Authority (PA) head Mahmoud Abbas published an op-ed in the UK’s Guardian on Thursday to mark the 100th anniversary of the Balfour Declaration, in which he disregarded the historical facts and presented a revisionist version of the events. The Balfour Declaration of November 2, 1917 was a letter from British Foreign Secretary Arthur Balfour to Baron Rothschild stating that “His Majesty’s government views with favour the establishment in Palestine of a national home for the Jewish people.” ISLAM Deceptions. מוסלמי לשעבר במסר לישראל: אל תעיזו למכור את ארצכם תמורת שלום. Al-Aksa incitement propaganda and the dirty role of Palestinian politics in Pakistan - Opinion. Most Arabs are nationalists, and have few if any similarities to non-Arab Muslims, especially South Asian Muslims. 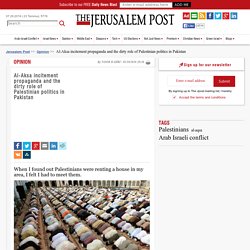 I remember, once in 1990s, a bunch of Palestinians rented a house in my area in Pakistan. They had received scholarships from the local university. At that point in my life I was very pro-Hamas. When I found out Palestinians were renting a house in my area, I felt I had to meet them. The image I had in my mind was of God-fearing people, deprived, poor and religious, sporting beards and dressing like real Mujahedeen, praying five times a day in masjids (mosques). I rang the bell and a tall guy, around six feet tall and clean shaven, with whitish skin like European, brown hair and a strong, muscular body, wearing a black T-shirt, black jeans with black boots and hat came to the door and said, “How can I help you”? A Pakistani Muslim's Path to Zionism: An Interview With Noor Dahri. In our interview with Noor Dahri, an independent counter-terrorism researcher in London and an honorary member of the Zionist Federation in the UK, he explains how his search for truth led him to become a Pakistani Muslim that is pro-Israel and pro Zionism. 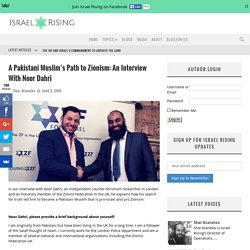 Noor Dahri, please provide a brief background about yourself: I am originally from Pakistan, but have been living in the UK for a long time. I am a follower of the Salafi thought of Islam. I currently work for the London Police department and am a member of several national and international organizations including the Zionist Federation-UK. 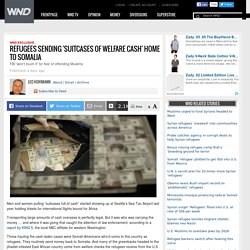 Transporting large amounts of cash overseas is perfectly legal. But it was who was carrying the money … and where it was going that caught the attention of law enforcement, according to a report by KING 5, the local NBC affiliate for western Washington. Those hauling the cash-laden cases were Somali-Americans who’d come to this country as refugees. They routinely send money back to Somalia. And many of the greenbacks headed to the jihadist-infested East African country come from welfare checks the refugees receive from the U.S. government, compliments of American taxpayers.

Carrying more than $10,000 while traveling out of the United States is legal as long as the traveler declares it by filling out a one-page federal form. Seattle and King County are home to the fourth largest Somali community in the United States. Philip B. Facebook. Saudi Writer Asks How Muslims Would Act If Christian Terrorists Blew Themselves Up In Their Midst. Liberal Saudi journalist Nadine Al-Budair, who lives in Qatar, penned an article in the Kuwaiti daily Al-Rai in which she wondered how Muslims would have acted if Christians had blown themselves up in their midst or tried to force their faith on them. 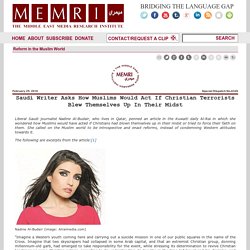 She called on the Muslim world to be introspective and enact reforms, instead of condemning Western attitudes towards it. Moderate Muslims Take a Video While Jews Are Stabbed to Death in Jerusalem. Quebec mayor gives muslim ‘refugees’ a rude wake up call that Canadians don’t adapt to them, it’s the other way around. Muslim parents ‘demanded’ the withdrawal of the pork of school menus, in the city of durval in québec. 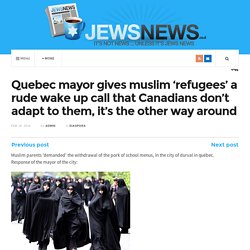 Response of the mayor of the city: ” Muslims must understand that they must adapt to Canada, its customs, its traditions, its way of life, because it was the country that was chosen to emigrate. Gates of Vienna: Islam Means Never Having to Say You're Sorry. The New English Review has published an important essay by Dr. 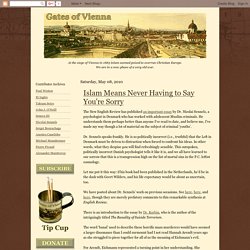 Nicolai Sennels, a psychologist in Denmark who has worked with adolescent Muslim criminals. He understands them perhaps better than anyone I’ve read to date, and believe me, I’ve made my way though a lot of material on the subject of criminal ‘youths’. Dr. Muslims and Westerners: The Psychological Differences > Nicolai Sennels. By Nicolai Sennels (May 2010) When I first read about Nicolai Sennels’ work concerning therapy, which he had conducted with criminal Muslims in Denmark, I knew that it would be groundbreaking. 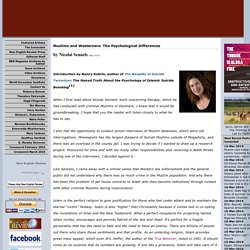 I hope that you the reader will listen closely to what he has to say. Sexual abuse widespread among Muslims. Danish Psychologist: Integration of Muslims in Western Societies is not possible. You are being redirected... Forget ISIS: 57 Muslim countries reveal they have a much BIGGER worry. Remember when former U.S. 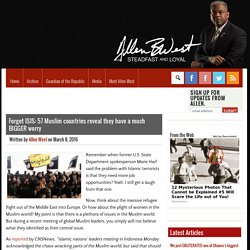 State Department spokesperson Marie Harf said the problem with Islamic terrorists is that they need more job opportunities? CROCK OF SH*T: 57 Islamic countries reveal what their BIGGEST problem is… you won’t believe it. Remember when former U.S. 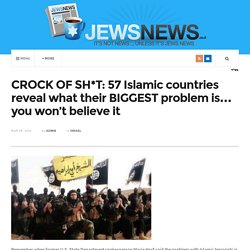 State Department spokesperson Marie Harf said the problem with Islamic terrorists is that they need more job opportunities? Jordanian Sheikh: ‘There is no “Palestine” in the Koran. Allah gave Israel to the Jews’