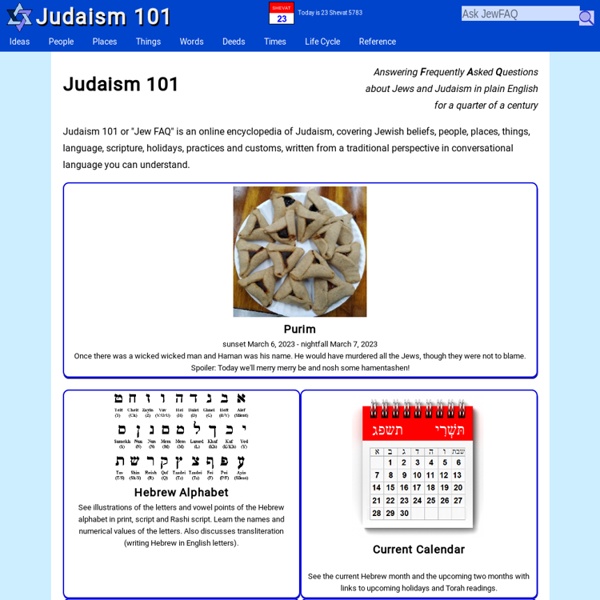 Judaism 101 is an online encyclopedia of Judaism, covering Jewish beliefs, people, places, things, language, scripture, holidays, practices and customs. My goal is to make freely available a wide variety of basic, general information about Judaism, written from a traditional perspective in plain English. This web site has grown continually for more than 10 years and continues to be updated periodically. The information in this site is written predominantly from the Orthodox viewpoint, because I believe that is a good starting point for any inquiry into Judaism. As recently as 300 years ago, this was the only Judaism, and it still is the only Judaism in many parts of the world. Be aware, however, that many Jews do not follow all of the traditions described here, or do not follow them in the precise form described here. Where to Start There are over eighty web pages on this site, comprising over 300 pages of text, a virtual book of information on Judaism. Just browsing?

Human Nature and the Purpose of Existence Written by: Nancy Khalek One of the most salient features of Sunni Islam is its emphasis on following and adhering to the custom and traditions of the Prophet (the Sunna). An essential aspect of this adherence is the emulation of Muhammad in everyday life. This, in part, is based on the general Islamic view that Muhammad represented the epitome of good character, that he was, in fact, sent as a prophet in order to teach people how to perfect their character.

Texts of Judaism Sacred-texts home Journal Articles: Judaism ORCT: Judaism Jewish DateSamaritans Buy CD-ROM Buy books about Judaism Tanakh Talmud Haggada Kabbalah Midrash Haggadah Prayer Books (Siddur) Ancient/Medieval Modern Links Tanakh (Hebrew Bible) The Tanakh is the Hebrew Bible, the quintessential sacred text. Where did the Genesis Flood waters go? - ChristianAnswers The whole Earth was covered with the Flood waters, and the world that then existed was destroyed by the very waters out of which the Earth had originally emerged at God's command (Genesis 1:9; 2 Peter 3:5-6). But where did those waters go after the Flood? There are a number of Scripture passages that identify the Flood waters with the present-day seas (Amos 9:6 and Job 38:8-11 note “waves”). If the waters are still here, why are the highest mountains not still covered with water, as they were in Noah's day?

About The Anti-Defamation League The Anti-Defamation League was founded in 1913 "to stop the defamation of the Jewish people and to secure justice and fair treatment to all." Now the nation's premier civil rights/human relations agency, ADL fights anti-Semitism and all forms of bigotry, defends democratic ideals and protects civil rights for all. A leader in the development of materials, programs and services, ADL builds bridges of communication, understanding and respect among diverse groups, carrying out its mission through a network of 27 Regional and Satellite Offices in the United States and an office in Israel. The Anti-Defamation League (ADL) fights anti-Semitism and all forms of bigotry in the U.S. and abroad through information, education, legislation and advocacy. ADL serves as a resource for government, media, law enforcement, educators and the public.

Forensic Pathology Online Written by Dr. Dinesh Rao Difficult or sensitive cases should ideally be the responsibility of an objective, experienced, well-equipped and well-trained prosector (the person performing the autopsy and preparing the written report) who is separate from any potentially involved political organization or entity. Internet History Sourcebooks Project The History of the Sephardic Communities The New World Diaspora General 19th Century WEB Walnut Street 19th Century Jewish-American history, poetry and fiction, polemics and philosophy. Judaism "It has been estimated that one-third of our Western civilization bears the marks of its Jewish ancestry." -- Huston Smith, The World's Religions Judaism began as early as 2000 BCE as the religion of Abraham and of the small nation of the Hebrews. Through thousands of years of suffering, persecution, dispersion, and the occasional victory, Jewish religion and culture has been profoundly influential. Today, about 14 million people identify themselves as Jews, and nearly 3.5 billion others follow belief systems directly influenced by Judaism (including Christianity, Islam, and the Bah'ai Faith). Modern Judaism is a complex phenomenon that incorporates both a nation and a religion, and often combines strict adherence to ritual laws with a more liberal attitude towards religious belief.

Ark of the Covenant Press here for video. One day, in 1978, Ron decided to go sightseeing near the Damascus Gate, in Jerusalem. Walking along an ancient stone quarry, known to some as "the Calvary Escarpment," he was talking with a local authority about Roman antiquities. Without warning, Ron's left hand pointed to a site being used as a rubbish dump and said, "That's Jeremiah's Grotto and the Ark of the Covenant is in there." Even though these words had come from his own mouth and his own hand had pointed, he had not consciously said or done these things. The man with him, quite out of character, also reacted strangely.

Board of Directors The Board is responsible for determining the strategic and policy direction of the BIS, supervising the management, and fulfilling the specific tasks given to it by the Bank's Statutes. It meets at least six times a year. Four advisory committees assist the Board in its work: The Administrative Committee reviews key areas of the Bank's administration, such as budget and expenditures, HR policies and IT.