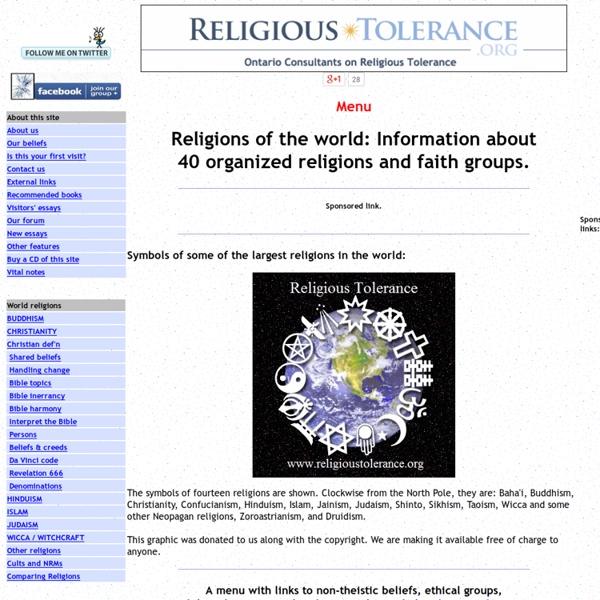 Menu Sponsored link. Symbols of some of the largest religions in the world: The symbols of fourteen religions are shown. Clockwise from the North Pole, they are: Baha'i, Buddhism, Christianity, Confucianism, Hinduism, Islam, Jainism, Judaism, Shinto, Sikhism, Taoism, Wicca and some other Neopagan religions, Zoroastrianism, and Druidism. This graphic was donated to us along with the copyright. A menu with links to non-theistic beliefs, ethical groups,philosophies, spiritual paths, etc is located elsewhere on this site. Approximate religious membership as a percentage of the world population: Introductory thoughts: Disclaimer: Information for these essays was extracted from reliable sources, and believed to be accurate and reasonably unbiased. If you find any errors here, please report them so that we can list them on our errata page and correct our essays. World religions: There are many, long established, major world religions, each with over three million followers. Neopagan religious faiths: Related:  Ateismo e religioni comparate

The major world religions The information provided below is intended to provide a short introduction to the major world religions as defined classically. Each description has been kept very short so that it is easy to read straight through all of them and get a general impression of the diversity of spiritual paths humanity takes to live the kind of life God wants. As a result, a great many things have been omitted. No omissions are intentional and readers are encouraged to consult other resources on the web as well as books for more in-depth information. For an excellent introduction to Hinduism, Buddhism, Islam, Confucianism, Christianity, and Judaism, Huston Smith's "The World's Religions" is highly recommended. The origins of Hinduism can be traced to the Indus Valley civilization sometime between 4000 and 2500 BCE. Hindus follow a strict caste system which determines the standing of each person. If you are looking for information on "OM" you can find it here. More Resources on Hinduism More Resources on Shinto

Coexist Foundation | Welcome to the Coexist Foundation Why Do People Believe in God? By Michael Shermer faith God atheism belief Why do you believe in God? I have been asking people this question for most of my adult life. In 1998, Frank Sulloway and I presented the query in a more official format—along with the question “Why do you think other people believe in God?” A 22-year-old male law student with moderate religious convictions (a self-rated five on a nine-point scale), who was raised by very religious parents and who today calls himself a deist, writes, “I believe in a creator because there seems to be no other possible explanation for the existence of the universe,” yet other “people believe in God to give their lives purpose and meaning.” A 43-year-old male computer scientist and Catholic with very strong religious convictions (a nine on the nine-point scale) “had a personal conversion experience, where I had direct contact with God.

JESUS COMPLEX: Is Jesus God? Jesus Complex Have you ever met a man who is the center of attention wherever he goes? Some mysterious, indefinable characteristic sets him apart from all other men. Well, that’s the way it was two thousand years ago with Jesus Christ. But it wasn’t merely Jesus’ personality that captivated those who heard him. Jesus’ only credentials were himself. Yet Jesus’ greatness was obvious to all those who saw and heard him. It was primarily Jesus’ unique claims that caused him to be viewed as a threat by both the Roman authorities and the Jewish hierarchy. What was it about Jesus Christ that made the difference? These questions get to the heart of who Jesus really was. After carefully examining Jesus’ life and words, former Cambridge professor and skeptic, C. Click here to continue reading about “Is Jesus God?”

The Story Of The Storytellers - The Gnostic Gospels | From Jesus To Christ | FRONTLINE The 52 texts discovered in Nag Hammadi, Egypt include 'secret' gospels poems and myths attributing to Jesus sayings and beliefs which are very different from the New Testament. Scholar Elaine Pagels explores these documents and their implications. From The Gnostic Gospels by Elaine Pagels Vintage Books, New York: 1979 pp. xiii-xxiii In December 1945 an Arab peasant made an astonishing archeological discovery in Upper Egypt. Rumors obscured the circumstances of this find--perhaps because the discovery was accidental, and its sale on the black market illegal. Thirty years later the discoverer himself, Muhammad 'Alí al-Sammán; told what happened. A few weeks later, as Muhammad 'Alí tells it, he and his brothers avenged their father's death by murdering Ahmed Isma'il. Fearing that the police investigating the murder would search his house and discover the books, Muhammad 'Alí asked the priest, al-Qummus Basiliyus Abd al-Masih, to keep one or more for him. For I am the first and the last.

Difference Between Islam and Buddhism | Difference Between | Islam vs Buddhism Islam vs Buddhism When it comes to some of the major religions in the world, a lot of people are skeptical, or even fearful of something that they do not know a lot about. Here, we will try to do away with some of the most common misconceptions regarding the two most common religions in the world: Islam and Buddhism. First, let’s take a look at what Islam, as a religion, is all about. It’s based on the religious book Qur’an, and the literal meaning of the name is ‘submission to God’. Based on the teachings of Islam as a religion, there are five duties which Muslims must practice within the community ‘“ and this is what Islamic Law revolves around. What about Buddhism? Next, let’s take a look at the distinct differences between the two religions. Buddhism does not focus too much on good and evil ‘“ while Islam considers Allah to be the creator of the universe, as well as being the source of all that is good and evil. Summary: 1. 2. 3. : If you like this article or our site.

The five major world religions - John Bellaimey HINDUISM Children in India are often given comic books describing the lives of the saints and gods. Take a look at one of these and think about the obstacle faced by the protagonist and what spiritual resources were required to overcome it.ISLAM Much of the beauty of the Qur'an comes in its poetry. To appreciate Arabic poetry is difficult for the non-speaker. Investigate the meanings of the following expressions and tell what each one means, literally and symbolically:"Seal of the Prophets""Sun" Letters and "Moon" LettersMen are known as Abu (Father of) and women as Umm (Mother of)Arabic words are all based on three (sometimes four) letter roots, so S-L-M is the root of Muslim, Salaam, Islam, and other wordsWhat are the Greater Jihad and the Lesser Jihad and why might most non-Muslims be surprised to learn which is which?

Atheism Resource THE GNOSTICS AND JESUS BY TIM KELLER, Redeemer Report, March 2004 Gospel of Thomas sounds far more misogynist than anything found in the Bible. For some months I have been getting questions about the "Gnostic gospels" and The Da Vinci Code, so it seems right to give readers of this newsletter a bit of guidance. This is by no means a definitive response or analysis—it is more like pastoral counsel— but I hope it will clear up a few things. The Gnostics’ Jesus In 1945 a red earthenware jar was found buried near Nag Hammadi, a town in upper Egypt. The writings of Gnosticism were much wider than the Nag Hammadi texts, but what makes the NH texts different is that, as Craig Blomberg writes, they use the purported conversations of Jesus with his disciples as "little more than an artificial framework for imparting Gnostic doctrine." The teachings of the gnostics’ Jesus flatly contradicts the Jesus of the Bible. Lost Gospels? But this is very much a minority view across the field of scholarship. As N.T. What can I say?

Atheist, Gnostic, Theist, Agnostic Too many times I have informed someone that I am an atheist, only to have them reply, “Oh, but how could you know that God doesn’t exist? You’re taking a faith position!” Many headaches later, we finally come to an agreement over the definitions of these words. This arrangement is an attempt to clarify and classify these words, so that their rogue meanings no longer confuse and muddle religious debate. To begin with, here are the four key terms arranged on a graph with their opposites across from them. Now here are the terms defined. The horizontal axis concerns WHAT YOU BELIEVE: The vertical axis concerns WHAT YOU THINK WE CAN KNOW: So, to restate: These four labels can be very useful in describing the way we feel about gods. An atheist agnostic is someone who does not believe in gods and also thinks that the existence of gods cannot be known. A theist gnostic is someone who believes in a god/gods and thinks that the existence of gods can be known.

Continental philosophy It is difficult to identify non-trivial claims that would be common to all the preceding philosophical movements. The term "continental philosophy", like "analytic philosophy", lacks clear definition and may mark merely a family resemblance across disparate philosophical views. Simon Glendinning has suggested that the term was originally more pejorative than descriptive, functioning as a label for types of western philosophy rejected or disliked by analytic philosophers.[4] Babette Babich emphasizes the political basis of the distinction, still an issue when it comes to appointments and book contracts.[5] Nonetheless, Michael E. Rosen has ventured to identify common themes that typically characterize continental philosophy.[6] First, continental philosophers generally reject scientism, the view that the natural sciences are the only or most accurate way of understanding phenomena. The term[edit] History[edit] Recent Anglo-American developments[edit] See also[edit] Notes[edit]

The Jesus Parallels The Jesus Parallels (1st edition, 2007) by Roger Viklund Umeå, Sweden The present essay is principally a translation of one chapter out of 30 from my book written in Swedish, Den Jesus som aldrig funnits (in English: The Jesus That Never Was). You can also find the original Swedish article, Jesusparallellerna, at my Swedish web site. Apart from the Introduction and the Summary, which I have partly rewritten, I have made only some minor changes; I have removed some things and added others. My intention Modern scholarship tends to disregard the similarities between Jesus of the Gospels and other demigods. In this essay, I have compared the life of Jesus according to the Gospels with the lives of other sons of God. My intention is … 1) to point out all the relevant similarities. 2) to include the quotes from the original sources, as far as possible, for everyone to be able to form their own opinion. 3) to show that many conceptions actually antedate Christianity. Vegetation Gods Sun Gods Adonis