Comparison of Genesis with Creation Stories of the Ancient Near East 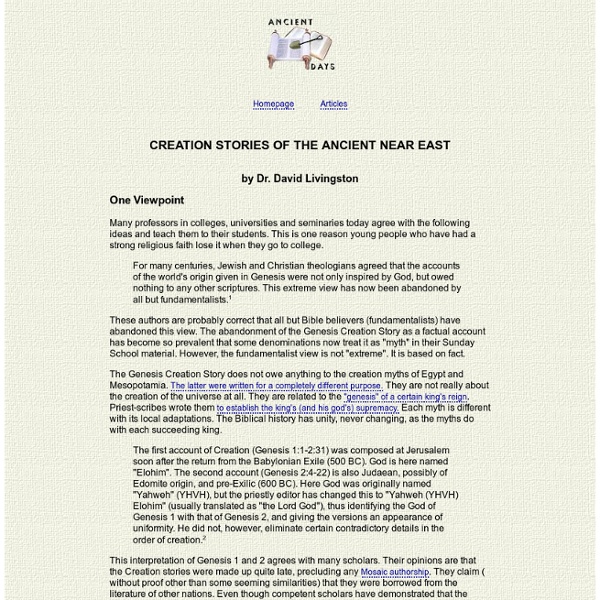 One Viewpoint Many professors in colleges, universities and seminaries today agree with the following ideas and teach them to their students. This is one reason young people who have had a strong religious faith lose it when they go to college. For many centuries, Jewish and Christian theologians agreed that the accounts of the world's origin given in Genesis were not only inspired by God, but owed nothing to any other scriptures. These authors are probably correct that all but Bible believers (fundamentalists) have abandoned this view. The Genesis Creation Story does not owe anything to the creation myths of Egypt and Mesopotamia. The first account of Creation (Genesis 1:1-2:31) was composed at Jerusalem soon after the return from the Babylonian Exile (500 BC). This interpretation of Genesis 1 and 2 agrees with many scholars. Out of these sources (Genesis through Numbers) they formed what is called the "Priestly History." Religion has evolved. Another Viewpoint Memphite Theology A.R. I.

World religions Menu Sponsored link. Symbols of some of the largest religions in the world: The symbols of fourteen religions are shown. Clockwise from the North Pole, they are: Baha'i, Buddhism, Christianity, Confucianism, Hinduism, Islam, Jainism, Judaism, Shinto, Sikhism, Taoism, Wicca and some other Neopagan religions, Zoroastrianism, and Druidism. This graphic was donated to us along with the copyright. A menu with links to non-theistic beliefs, ethical groups,philosophies, spiritual paths, etc is located elsewhere on this site. Approximate religious membership as a percentage of the world population: Introductory thoughts: Disclaimer: Information for these essays was extracted from reliable sources, and believed to be accurate and reasonably unbiased. If you find any errors here, please report them so that we can list them on our errata page and correct our essays. World religions: There are many, long established, major world religions, each with over three million followers. Neopagan religious faiths:

The major world religions The information provided below is intended to provide a short introduction to the major world religions as defined classically. Each description has been kept very short so that it is easy to read straight through all of them and get a general impression of the diversity of spiritual paths humanity takes to live the kind of life God wants. As a result, a great many things have been omitted. For an excellent introduction to Hinduism, Buddhism, Islam, Confucianism, Christianity, and Judaism, Huston Smith's "The World's Religions" is highly recommended. The origins of Hinduism can be traced to the Indus Valley civilization sometime between 4000 and 2500 BCE. Hindus follow a strict caste system which determines the standing of each person. If you are looking for information on "OM" you can find it here. More Resources on Hinduism Judaism, Christianity, Islam and the Baha'i faith all originated with a divine covenant between the God of the ancient Israelites and Abraham around 2000 BCE.

The Story Of The Storytellers - The Gnostic Gospels | From Jesus To Christ | FRONTLINE The 52 texts discovered in Nag Hammadi, Egypt include 'secret' gospels poems and myths attributing to Jesus sayings and beliefs which are very different from the New Testament. Scholar Elaine Pagels explores these documents and their implications. From The Gnostic Gospels by Elaine Pagels Vintage Books, New York: 1979 pp. xiii-xxiii In December 1945 an Arab peasant made an astonishing archeological discovery in Upper Egypt. Thirty years later the discoverer himself, Muhammad 'Alí al-Sammán; told what happened. A few weeks later, as Muhammad 'Alí tells it, he and his brothers avenged their father's death by murdering Ahmed Isma'il. Fearing that the police investigating the murder would search his house and discover the books, Muhammad 'Alí asked the priest, al-Qummus Basiliyus Abd al-Masih, to keep one or more for him. Sold on the black market through antiquities dealers in Cairo, the manuscripts soon attracted the attention of officials of the Egyptian government. Yet by A.

THE GNOSTICS AND JESUS BY TIM KELLER, Redeemer Report, March 2004 Gospel of Thomas sounds far more misogynist than anything found in the Bible. For some months I have been getting questions about the "Gnostic gospels" and The Da Vinci Code, so it seems right to give readers of this newsletter a bit of guidance. This is by no means a definitive response or analysis—it is more like pastoral counsel— but I hope it will clear up a few things. The Gnostics’ Jesus In 1945 a red earthenware jar was found buried near Nag Hammadi, a town in upper Egypt. The writings of Gnosticism were much wider than the Nag Hammadi texts, but what makes the NH texts different is that, as Craig Blomberg writes, they use the purported conversations of Jesus with his disciples as "little more than an artificial framework for imparting Gnostic doctrine." The teachings of the gnostics’ Jesus flatly contradicts the Jesus of the Bible. Lost Gospels? But this is very much a minority view across the field of scholarship. As N.T. What can I say?

The Book of Revelation Reading Revelation The book of Revelation has puzzled Christians for centuries. Many today believe it holds the key to climactic events in the near future leading up to the second coming of Christ. However, the true key to reading Revelation is to ask how the original recipients of John’s letter would have read it. John wrote his letter to Christians in the last decade of the first century, specifically to seven churches in Asia Minor (modern-day ). These churches were challenged not only by the temptations of idolatry and sexual immorality but also were suffering persecution from the and the Jewish community (Rev. 2:9-10). Those who interpret Revelation as a codebook for the second coming of Christ overlook the book’s focus on the atoning work of Christ at his first coming. When we study Revelation, we should keep certain interpretation guidelines in mind: · We need to understand the book in its historical context. Notes on the First Vision (ch 1-3) Notes on the Second Vision (ch 4-11)