BBC: Loving Apple looks like a religion to an MRI scan. Later today, BBC 3 will be airing Secrets of the Superbrands, a documentary about the relationship between consumers and the brands that shape our behavior, our desires and our lives. 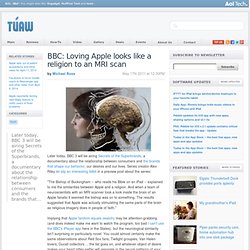 Series creator Alex Riley let slip an interesting tidbit in a preview post about the series: "The Bishop of Buckingham -- who reads his Bible on an iPad -- explained to me the similarities between Apple and a religion. And when a team of neuroscientists with an MRI scanner took a look inside the brain of an Apple fanatic it seemed the bishop was on to something. The results suggested that Apple was actually stimulating the same parts of the brain as religious imagery does in people of faith. " Implying that Apple fandom equals zealotry may be attention-grabbing (and does indeed make me want to watch the program; too bad I can't use the BBC's iPlayer app here in the States), but the neurological similarity isn't surprising or particularly novel. Best in Blogs: Tech Brands Are Religions, Twitter Is No Revolution, and Obama Gets the Cover Treatment : Media : Technology. Top Stories for the Week of Sept. 27 - Oct. 1, 2010 A Duke University study indicates that brand loyalty is like religion, and a product logo can serve the same function as a crucifix or Star of David for nonbelievers. 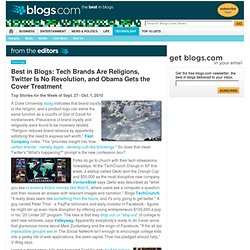 Prevalance of brand loyalty and religiosity were found to be inversely related. "Religion reduces brand reliance by apparently satisfying the need to express self-worth," Fast Company notes. This "provides insight into how certain brands - namely Apple - develop cult-like followings. " So does that mean Twitter's "What's happening? " Folks do go to church with their tech obsessions nowadays. Here's a dispruption: AOL has acquired TechCrunch, for $40 million, or $25 million, reports Business Insider.

President Obama is interviewed in the new Rolling Stone, and the cover has him in a serious pose: Obama Fights Back. Are Brands Becoming Religions? How Brands are like Religion. In an article that Martin Lindstrom wrote for Ad Age about Brands and Religion, he questions whether “brands manage to create their own religion by coincidently or deliberately, adopting triggers and tactics from the world of religion”. 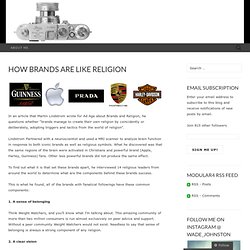 Lindstrom Partnered with a neuroscientist and used a MRI scanner to analyze brain function in response to both iconic brands as well as religious symbols. What he discovered was that the same regions of the brain were activated in Christians and powerful brand (Apple, Harley, Guinness) fans. Other less powerful brands did not produce the same effect. To find out what it is that set these brands apart, he interviewed 14 religious leaders from around the world to determine what are the components behind these brands success.

This is what he found, all of the brands with fanatical followings have these common components: 1. Think Weight Watchers, and you’ll know what I’m talking about. 2. 3. 4. Authenticity is hard to define. From brands to religions « StillLive.NET. Citing Dan Brown’s latest The Lost Symbol: “…what are the three prerequisites for an ideology to be considered a religion?” 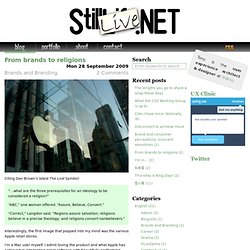 “ABC,” one woman offered. “Assure, Believe, Convert.” “Correct,” Langdon said. “Regions assure salvation; religions believe in a precise theology; and religions convert nonbelievers.” Interestingly, the first image that popped into my mind was the various Apple retail stores. I’m a Mac user myself. Apple assures softwares that just work;Apple believes in making your life easier and seamless;Apple converts PC users. More precisely, according to Russell Belk, a consumer behaviourist at the University of Utah: Consumer Fanboys Confuse Brand Identity With Their Own. By Jacqui Cheng, Ars Technica Have you ever found yourself frothing at the fingertips while explaining why someone doesn’t deserve to use an iPhone because of the offender’s deeply flawed sense of aesthetics? 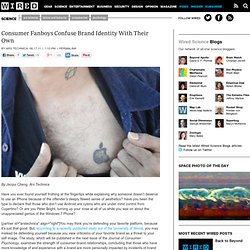 Have you been the type to declare that those who don’t use Android are cylons who are under mind control from Cupertino? Or are you Peter Bright, turning up your nose at all of us while you wax on about the unappreciated genius of the Windows 7 Phone? [partner id="arstechnica" align="right"]You may think you’re defending your favorite platform, because it’s just that good.

But, according to a recently published study out of the University of Illinois, you may instead be defending yourself because you view criticisms of your favorite brand as a threat to your self image. The researchers performed two experiments, one on a group of 30 women and another on 170 undergraduate students, in order to see whether the subjects’ self esteem was tied to the general ratings of various brands.

Fanboys. Fanboys Have you ever loved something so much it hurt? 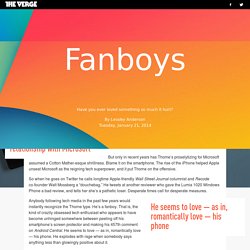 By Lessley Anderson Tuesday, January 21, 2014 Anytime anybody in the universe says something negative about Microsoft, Brad Thorne* loses it. He fires up Twitter: “You’re fucking pathetic!... You have your head so far up your ass!... Thorne, a fortyish IT manager with a preppy wardrobe and shy grin, is actually a nice guy in person.