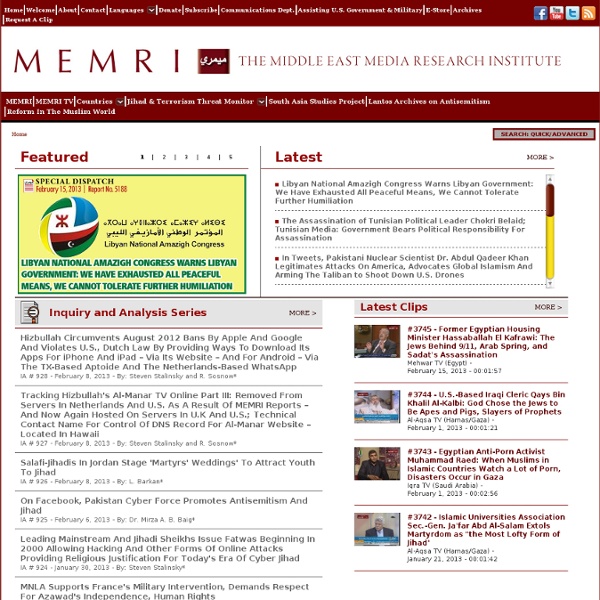 ALEC – American Legislative Exchange Council More than 40 years ago, a small group of state legislators and conservative policy advocates met in Chicago to implement a vision: A nonpartisan membership association for conservative state lawmakers who shared a common belief in limited government, free markets, federalism, and individual liberty. Their vision and initiative resulted in the creation of a voluntary membership association for people who believed that government closest to the people was fundamentally more effective, more just, and a better guarantor of freedom than the distant, bloated federal government in Washington, D.C. At that meeting, in September 1973, state legislators, including then Illinois State Rep. Henry Hyde, conservative activist Paul Weyrich, and Lou Barnett, a veteran of then Gov. Ronald Reagan’s 1968 presidential campaign, together with a handful of others, launched the American Legislative Exchange Council.

Selective Memri For some time now, I have been receiving small gifts from a generous institute in the United States. The gifts are high-quality translations of articles from Arabic newspapers which the institute sends to me by email every few days, entirely free-of-charge. The emails also go to politicians and academics, as well as to lots of other journalists. The stories they contain are usually interesting. Whenever I get an email from the institute, several of my Guardian colleagues receive one too and regularly forward their copies to me - sometimes with a note suggesting that I might like to check out the story and write about it. If the note happens to come from a more senior colleague, I'm left feeling that I really ought to write about it.

Yes, MEMRI, there is a Fatwa from Khamenei forbidding Nukes I’m told that MEMRI, which has its origins in Israeli military intelligence, has put out a statement doubting that Iranian Supreme Leader Ali Khamenei ever issued a fatwa forbidding nuclear weapons. (MEMRI claims to be a 501(c)3 non-profit but is actually an effort to cherry-pick Middle Eastern news to present the most negative face of the Arab world to Americans so as to prejudice them in favor of Israel; in this case it is just doing propaganda). A Reddit.com contributor has effectively answered this piece of disinformation. This posting points out that the official IRNA news agency said in 2005, “The Leader of the Islamic Republic of Iran, Ayatollah Ali Khamenei has issued the Fatwa that the production, stockpiling and use of nuclear weapons are forbidden under Islam and that the Islamic Republic of Iran shall never acquire these weapons.”

no logo Published at The Intercept Now that it seems virtually certain that Donald Trump will withdraw the United States from the Paris climate accord, and the climate movement is quite rightly mobilizing in the face of this latest dystopian lurch, it’s time to get real about something: Pretty much everything that is weak, disappointing, and inadequate about that deal is the result of U.S. lobbying since 2009. The fact that the agreement only commits governments to keeping warming below an increase of 2 degrees, rather than a much safer firm target of 1.5 degrees, was lobbied for and won by the United States. The fact that the agreement left it to individual nations to determine how much they were willing to do to reach that temperature target, allowing them to come to Paris with commitments that collectively put us on a disastrous course toward more than 3 degrees of warming, was lobbied for and won by the United States.

Middle East Media Research Institute - Profile - Right Web - Institute for Policy Studies Please note: IPS Right Web neither represents nor endorses any of the individuals or groups profiled on this site. Founded in 1998 "to inform the debate over U.S. policy in the Middle East," MEMRI (the Middle East Media Research Institute) claims to be an "independent, nonpartisan, nonprofit" organization. However, while the group is lauded by some observers for revealing various facets of Arab society to broader audiences, its trajectory and direction have been largely dominated by hawkish "pro-Israel" politics, and its work has been repeatedly criticized for being biased and at times purposely misleading. Among MEMRI's key activities are publishing translations and analyses of news sources from throughout the Greater Middle East.

Campus Watch by Daniel Pipes In response to: The Storm over the Israel Lobby from the June 8, 2006 issue To the Editors: Margo Kingston Margo Kingston (born 1959) is an Australian journalist, author, and commentator. She is best known for her work at The Sydney Morning Herald and her weblog, Webdiary. Since 2012, Kingston has been a citizen journalist, reporting and commenting on Australian politics via Twitter and her own Web site. Early life and education[edit] Kingston was born in Maryborough, Queensland and was raised in Mackay.

REPORT: Broadcast News Networks Misrepresent Intelligence On Iranian Nuclear Issues Many in the media have long since repudiated their failures in the lead-up to the Iraq War, acknowledging that they were too quick to accept the false notion that Iraq possessed a sizable and dangerous cache of weapons of mass destruction. The question today is whether they have learned from those mistakes. The media's self-reflection began as early as May of 2004, little more than a year after the conflict began, when The New York Times editorial board reflected on the paper's coverage of the war and stated that they "found a number of instances of coverage that was not as rigorous as it should have been." Top editors at the Times and The Washington Post subsequently acknowledged they had failed to push for front-page articles on "the flimsiness of the intelligence on W.M.D." The media's poor coverage has been noted by the Post 's Walter Pincus , CNN's Howard Kurtz , CBS' Katie Couric , and many more .

Rick Steve's "I've been duped" Rick Steves watched Peace, Propaganda, and the Promised Land and had an epiphany, he has seen the light. If you happen to be one of the 3.5 people in America who have never heard of Rick Steves watch this 60 Minute episode. He’s huge, the only famous American tour guide. Rick Steves He’s got a popular TV show , hosts NPR Travel with Rick Steves, and has a 20-million-dollar-a-year business selling travel books. Can’t get much more mainstream than that.

Anita Roddick Dame Anita Roddick, DBE (23 October 1942 – 10 September 2007) was a British-born international businesswoman, human rights activist and environmental campaigner, best known as the founder of The Body Shop, a cosmetics company producing and retailing natural beauty products that shaped ethical consumerism.[1][2] The company was one of the first to prohibit the use of ingredients tested on animals and one of the first to promote fair trade with third world countries. Roddick was involved in activism and campaigning for environmental and social issues, including involvement with Greenpeace and The Big Issue. In 1990, Roddick founded Children On The Edge, a charitable organisation which helps disadvantaged children in eastern Europe and Asia.[3] Honours[edit]

The media and Iran: familiar mindlessness (updated below) The lesson supposedly learned by the U.S. establishment media from the Iraq debacle was the danger of relying on anonymous government sources to disseminate unverified fear-mongering accusations. Rather obviously, no such lesson has been learned, as this continues to be the primary reporting method for accusing the Supreme Hitlers of the Moment — Iran — of anything and everything the U.S. Government can dream up. The latest entry, and one of the most egregious yet, is this Washington Post screed appearing under this headline and hovering scary picture: Here’s the crux of the story, by R. Why the U.S. Media Barely Covered Brutal Right-Wing Race Riots in Tel Aviv June 17, 2012 | Like this article? Join our email list: