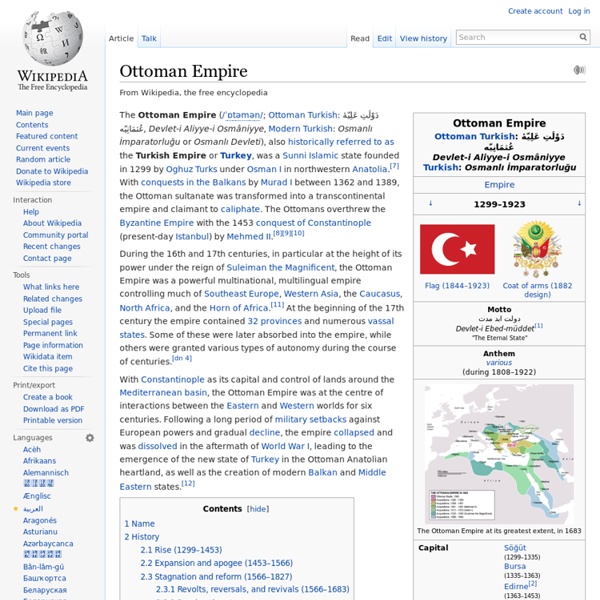 The Ottoman Empire (/ˈɒtəmən/; Ottoman Turkish: دَوْلَتِ عَلِيّهٔ عُثمَانِیّه, Devlet-i Aliyye-i Osmâniyye, Modern Turkish: Osmanlı İmparatorluğu or Osmanlı Devleti), also historically referred to as the Turkish Empire or Turkey, was a Sunni Islamic state founded in 1299 by Oghuz Turks under Osman I in northwestern Anatolia.[7] With conquests in the Balkans by Murad I between 1362 and 1389, the Ottoman sultanate was transformed into a transcontinental empire and claimant to caliphate. The Ottomans overthrew the Byzantine Empire with the 1453 conquest of Constantinople (present-day Istanbul) by Mehmed II.[8][9][10] With Constantinople as its capital and control of lands around the Mediterranean basin, the Ottoman Empire was at the centre of interactions between the Eastern and Western worlds for six centuries. Name[edit] History[edit] Rise (1299–1453)[edit] In the century after the death of Osman I, Ottoman rule began to extend over the Eastern Mediterranean and the Balkans. Law[edit]

Related:  The Story of Human Language

Near East The Near East is a geographical term that roughly encompasses Western Asia. Despite having varying definitions within different academic circles, the term was originally applied to the maximum extent of the Ottoman Empire. The term has fallen into disuse in English and has been replaced by the terms "Middle East" and "West Asia", the former of which may include Egypt, and the latter strictly Southwest Asia including the Transcaucasus.

The collapse of American democracy 12 March 2012 One week ago, US Attorney General Eric Holder delivered a speech asserting the right of the president to secretly order the assassination of American citizens. Citing the so-called “war on terror,” he claimed that this never-before-asserted authority was lawful under the president’s war-making powers and was not subject to judicial review. Holder stressed that the president’s power to order extra-judicial killings was part of a range of powers including the abduction of suspected terrorists and their indefinite internment, without trial, either in civilian or military prisons. Having noted that terrorists “reside within our own borders,” he insisted that the government’s authority to use lethal force was “not limited to the battlefields of Afghanistan.” The speech was in response to pressure on the administration to provide a legal rationale for the targeted killing of three US citizens in Yemen last fall.

Muslim conquests According to traditional accounts, the Muslim conquests (Arabic: الغزوات‎, al-Ġazawāt or Arabic: الفتوحات الإسلامية‎, al-Futūḥāt al-Islāmiyya) also referred to as the Islamic conquests or Arab conquests,[2] began with the Islamic prophet Muhammad in the 7th century. He established a new unified polity in the Arabian Peninsula which under the subsequent Rashidun (The Rightly Guided Caliphs) and Umayyad Caliphates saw a century of rapid expansion of Muslim power. They grew well beyond the Arabian Peninsula in the form of a Muslim empire with an area of influence that stretched from the borders of China and India, across Central Asia, the Middle East, North Africa, Sicily, and the Iberian Peninsula, to the Pyrenees. Edward Gibbon writes in The History of the Decline and Fall of the Roman Empire:

Turkish language Turkish ( Türkçe ), also referred to as Istanbul Turkish,[4] is the most widely spoken of the Turkic languages, with around 10–15 million native speakers in Southeast Europe (mostly in East and Western Thrace) and 60–65 million native speakers in Western Asia (mostly in Anatolia). Outside Turkey, significant smaller groups of speakers exist in Germany, Bulgaria, Macedonia,[5] Northern Cyprus,[6] Greece,[7] the Caucasus, and other parts of Europe and Central Asia. Cyprus has requested that the European Union add Turkish as an official EU language, even though Turkey is not a member state.[8] To the west, the influence of Ottoman Turkish—the variety of the Turkish language that was used as the administrative and literary language of the Ottoman Empire—spread as the Ottoman Empire expanded. In 1928, as one of Atatürk's Reforms in the early years of the Republic of Turkey, the Ottoman Turkish alphabet was replaced with a Latin alphabet.

Who are America's Creditors? or, Debt Economics for Beginners Thanks to all of you who read and enjoyed The U.S. National Debt – 233 years in the making. Here, at last is the third article in this series on World Debt – Who are America’s Creditors? Or, debt economics for beginners. Let us fittingly start this article with wise words from one of the founding fathers: "There is in the nature of government an impatience of control that disposes those invested with power to look with an evil eye upon all external attempts to restrain or direct its operations.

2008 Mumbai attacks The 2008 Mumbai attacks were twelve coordinated shooting and bombing terrorist attacks lasting four days across Mumbai, India's largest city,[6][7] by members of Lashkar-e-Taiba.[8] Ajmal Kasab, the only attacker who was captured alive, later confessed upon interrogation that the attacks were conducted with the support of Pakistan's ISI.[9][10] The attacks, which drew widespread global condemnation, began on Wednesday, 26 November and lasted until Saturday, 29 November 2008, killing 164 people and wounding at least 308.[2][11] Eight of the attacks occurred in South Mumbai: at Chhatrapati Shivaji Terminus, the Oberoi Trident,[12] the Taj Mahal Palace & Tower,[12] Leopold Cafe, Cama Hospital (a women and children's hospital),[12] the Nariman House Jewish community centre,[13] the Metro Cinema,[14] and in a lane behind the Times of India building and St. Background[edit] Training[edit] The recruits went through the following stages of training, according to the Indian and U.S. media:

Mustafa Kemal Atatürk Mustafa Kemal Atatürk (pronounced [mustäˈfä ceˈmäl äˈtäˌtyɾc]; 19 May 1881 (conventional) – 10 November 1938) was a Turkish army officer, revolutionary, and the first President of Turkey. He is credited with being the founder of the Republic of Turkey. His surname, Atatürk (meaning "Father of the Turks"), was granted to him in 1934 and forbidden to any other person by the Turkish parliament.[1] Atatürk was a military officer during World War I.[2] Following the defeat of the Ottoman Empire in World War I, he led the Turkish National Movement in the Turkish War of Independence. Having established a provisional government in Ankara, he defeated the forces sent by the Allies, eventually leading to victory in the Turkish War of Independence.

Problems Facing Native American Indians in the Modern World The Native American Indian population of the United States faces serious cultural and social dilemmas that threaten their society. Among these issues are the problems of poverty, alienation and a high rate of alcoholism. There is also the threat of a loss of their cultural identity due to interracial marriages and the large number of young Native Americans who are leaving the territories of the Indian Nations and becoming fully integrated into American culture, leaving the old ways of their cultural history behind.

Battle of Vienna The battle was won by the combined forces of the Holy Roman Empire and the Polish–Lithuanian Commonwealth, the latter being represented only by the forces of the Crown of the Kingdom of Poland (the march of the Lithuanian army was delayed; as a result they arrived in Vienna after it was relieved[13]). The Viennese garrison was led by Ernst Rüdiger Graf von Starhemberg, an Austrian subject of Leopold I, Holy Roman Emperor. The overall command was held by the commander of the Polish forces, the King of Poland, Jan III Sobieski. The alliance fought the army of the Ottoman Empire and those of Ottoman fiefdoms commanded by Grand Vizier Merzifonlu Kara Mustafa Pasha. The siege itself began on 14 July 1683, by the Ottoman Empire army of approximately 90,000[1]–300,000[4][5][6][7] men. The besieging force was composed of 60 ortas of Janissaries (12,000 men paper strength) with an observation army of c.70,000[14] men watching the countryside.

Western Asia Western Asia, West Asia, Southwestern Asia or Southwest Asia is the westernmost subregion of Asia. The concept is in limited use, as it significantly overlaps with the Middle East (or the Near East), the main difference usually being the exclusion of the majority of Egypt (which would be counted as part of North Africa) and the inclusion of the Caucasus. The term is sometimes used for the purposes of grouping countries in statistics. Thoughts on the "New World Order And 2012" Hub [1] The nation was again without a Federally chartered bank until 1907 when, after a series of financial panics which culminated in the Panic of 1907, Congress and the President began to act. On December 23, 1913, Congress passed, and President Wilson signed, Title 12 U.S.C. ch.3. This is the law, known as the Glass-Owen bill, which created the Federal Reserve System. Later, it was renamed the Federal Reserve Act. In 1907, the government was still pro-big business (possibly at the insistence of the Cartel and because of the political philosophy of the party then in power); it still had a laissez-faire attitude toward business. [Note - This is the same kind of environment we experienced from 1999 to 2008.]

Fall of Constantinople The Fall of Constantinople (Greek: Άλωση της Κωνσταντινούπολης, Alōsē tēs Kōnstantinoupolēs; Turkish: İstanbul'un Fethi Conquest of Istanbul) was the capture of Constantinople, the capital of the Eastern Roman (Byzantine) Empire, which occurred after a siege by the invading Ottoman Empire, under the command of 21-year-old Ottoman Sultan Mehmed II, against the defending army commanded by Byzantine Emperor Constantine XI Palaiologos. The siege lasted from Friday, 6 April 1453 until Tuesday, 29 May 1453 (according to the Julian calendar), when the city fell and was finally conquered by the Ottomans. The capture of Constantinople (and two other Byzantine splinter territories soon thereafter) marked the end of the Roman Empire, an imperial state which had lasted for nearly 1,500 years.[27] The Ottoman conquest of Constantinople also dealt a massive blow to Christendom, as the Ottoman armies thereafter were free to advance into Europe without an adversary to their rear. Preparations[edit]

Turkey Country straddling Southeastern Europe and Western Asia Turkey (Turkish: Türkiye [ˈtyɾcije]), officially the Republic of Turkey (Turkish: Türkiye Cumhuriyeti [ˈtyɾcije dʒumˈhuːɾijeti] ( One of the world's earliest permanently settled regions, present-day Turkey was home to important Neolithic sites, and was inhabited by various civilisations, such as the ancient Anatolian peoples.[12][13][14] Hellenization started in the area during the era of Alexander the Great and continued into the Byzantine era.[13][15] The Seljuk Turks began migrating in the 11th century, and the Sultanate of Rum ruled Anatolia until the Mongol invasion in 1243, when it disintegrated into small Turkish principalities.[16] Beginning in the late 13th century, the Ottomans started uniting the principalities and conquering the Balkans, and the Turkification of Anatolia increased during the Ottoman period. After Mehmed II conquered Constantinople in 1453, Ottoman expansion continued under Selim I. Etymology

TOTAL NEW WORLD ORDER, Coming to America IN 2012. Paid for by Rich Corporate Money. A new world order coming to earth? Real or imagined? Something will be changing, and it is up to us as "the people" to decide which direction those changes will go. This hub is dedicated to those Hubbers that have read some of my hubs and have chosen to comment by calling me a liberal fag instead of offering sensible critique. There will be a new world order, coming to America soon.