Tears of Jihad - Political Islam. These figures are a rough estimate of the death of non-Muslims by the political act of jihad. 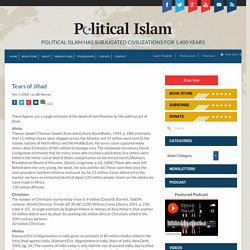 Africa Thomas Sowell [Thomas Sowell, Race and Culture, BasicBooks, 1994, p. 188] estimates that 11 million slaves were shipped across the Atlantic and 14 million were sent to the Islamic nations of North Africa and the Middle East. For every slave captured many others died. Estimates of this collateral damage vary. Islamophobes. Have you been branded an Islamophobe – a slur word invented by Muslim leaders and clerics against non-Muslims? 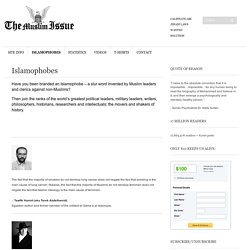 State of 'dhimmitude' seen as threat to Christians, Jews by Jula Duin ("Washington Times," October 30, 2002) East African Muslims Protest New Anti-Terror Law by Stephen Mbogo ("CNSNews.com," November 28, 2002) Muslims in Tanzania are unhappy about the passage of new anti-terrorism legislation, which they say will be used to "oppress" them. 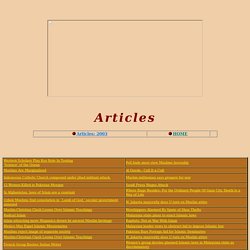 Muslim protestors in the East African country recently held a service, praying that all those involved in preparing and passing the law would experience "bad things. " Religious leaders accused the U.S. of having a hand in the legislative move, a claim denied by the U.S. embassy in Dar-es-Salaam. Western Scholars Play Key Role In Touting 'Science' of the Quran THE WALL STREET JOURNAL: January 23, 2002 By DANIEL GOLDEN.

East African Muslims Protest New Anti-Terror Law by Stephen Mbogo ("CNSNews.com," November 28, 2002) Muslims in Tanzania are unhappy about the passage of new anti-terrorism legislation, which they say will be used to "oppress" them. 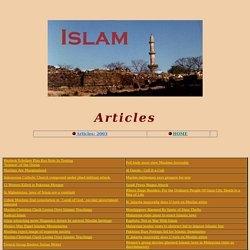 Muslim protestors in the East African country recently held a service, praying that all those involved in preparing and passing the law would experience "bad things. " Religious leaders accused the U.S. of having a hand in the legislative move, a claim denied by the U.S. embassy in Dar-es-Salaam.

Muhammad and the Rise of Islam

Islam around the World. Scientific Errors in the Qur'an. Muslims believe that the Qur'an contains a message from an all-powerful, all-knowing, infallible being. 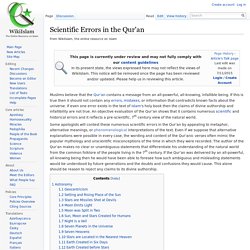 If this is true then it should not contain any errors, mistakes, or information that contradicts known facts about the universe. Blogging the Qur’an. Being an Unforgivably Protracted Debunking of George Bernard Shaw’s Views of Islam. I mentioned in the passing, in an earlier post, that I had come across a bizarre interview between George Bernard Shaw and a Saudi mystic. 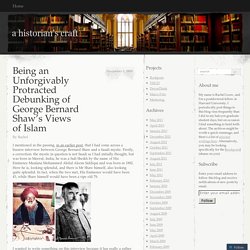 Firstly, a correction: the mystic in question is not Saudi as I had initially thought, but was born in Meerut, India; he was a Sufi Sheikh by the name of His Eminence Maulana Mohammed Abdul Aleem Siddiqui and was born in 1892. Islamic philosophy. RELIANCE OF THE TRAVELLER. Islamic Teaching: Non-Muslims Equal to Dogs. Islam and Apostasy. Apostasy (ارتداد, irtidād and ridda) i.e. the rejection of faith, is a serious offense in Islam. 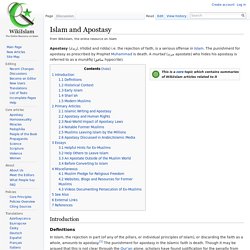 The punishment for apostasy as prescribed by Prophet Muhammad is death. A murtad (مرتد apostate) who hides his apostasy is referred to as a munāfiq (منافق hypocrite). Introduction Definitions. The Ultimate Source of Islamic Hate for Infidels. CBN News Who is ultimately responsible for the ongoing attacks on Christians and their churches throughout the Islamic world? 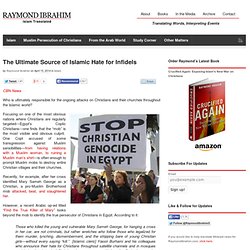 Focusing on one of the most obvious nations where Christians are regularly targeted—Egypt’s Coptic Christians—one finds that the “mob” is the most visible and obvious culprit. One Copt accused of some transgression against Muslim sensibilities—from having relations with a Muslim woman, to ruining a Muslim man’s shirt—is often enough to prompt Muslim mobs to destroy entire Christian villages and their churches. Are Slave-Girls in Islam Equivalent to Animals? Many are now aware that the Koran—that is, Allah’s word—permits, not just polygamy, but forced concubinage (sex with captive women), according to Koran 4:3: “Marry such women as seem good to you, two and three and four; but if you fear that you will not do justice, then only one, or what your right hands possess [captive women taken in war].” 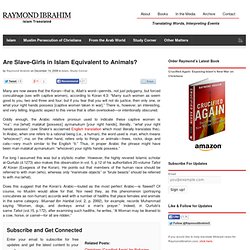 There is, however, an interesting, and very telling, linguistic aspect to this verse that is often overlooked—or intentionally obscured. Oddly enough, the Arabic relative pronoun used to indicate these captive women is “ma”: ma [what] malakat [possess] aymanukum [your right hands], literally, “what your right hands possess” (see Shakir’s acclaimed English translation which most literally translates this). In Arabic, when one refers to a rational being (i.e., a human), the word used is man, which means “who(ever)”; ma, on the other hand, refers only to things or animals—trees, rocks, dogs and cats—very much similar to the English “it.”

Islam on Cows, Horses, Camels and Women. By Raymond IbrahimFrontPageMagazine.com July 24, 2013 One of the few positive developments following the rise of the Islamists during the "Arab Spring" is that today many average and/or nominal Muslims are seeing the true face of Islam and its teachings. 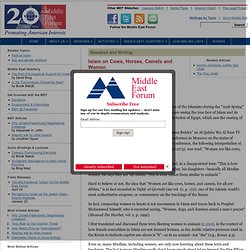 And many—as evinced by the June 30 Revolution of Egypt, which saw the ousting of the Muslim Brotherhood—don't want to deal with it. For example, during a recent episode of "With Dr. Issues of Mechanical Slaughter and Stunning. You Are Here:Home / Resources / Issues of Mechanical Slaughter and Stunning The most common practice found in a majority of the larger abattoirs is machine slaughter or mechanical slaughter. This is when the slaughter is carried out by a mechanical rotating blades with no Muslim slaughterman present either to perform the slaughter, or to recite the ‘Tasmiyah’ on each individual slaughter.

Thousands of chickens are slaughtered in this manner daily. Ban the Burqa? The Argument in Favor. Should other Western states follow the Belgian and French examples and ban the full Islamic body and face-covering veil—or more specifically, the burqa and the niqab? In other words, should the West ban any and all clothing which obliterates one's identity? Most Europeans, according to recent surveys, seem to think so.[1] Still, significant numbers, especially in the United States,[2] and including quite a few feminists,[3] have viewed such a ban as religiously intolerant, anti-woman, and anti-Western. The House of Islam Unveils Its Women. Tawriya: "Creative Lying" Advocated in Islam. Now meet tawriya, a doctrine that allows lying in virtually all circumstances. Perhaps you have heard of taqiyya, the Muslim doctrine that allows lying in certain circumstances -- primarily when Muslim minorities live under infidel authority.

Now meet tawriya, a doctrine that allows lying in virtually all circumstances—including to fellow Muslims and by swearing to Allah—provided the liar is creative enough to articulate his deceit in a way that is "technically" true. Deceit and lying may be far more ingrained in the culture than previously thought. How Taqiyya Alters Islam's Rules of War: Defeating Jihadist Terrorism. Islam must seem a paradoxical religion to non-Muslims. On the one hand, it is constantly being portrayed as the religion of peace; on the other, its adherents are responsible for the majority of terror attacks around the world.

Apologists for Islam emphasize that it is a faith built upon high ethical standards; others stress that it is a religion of the law. Islam's dual notions of truth and falsehood further reveal its paradoxical nature: While the Qur'an is against believers deceiving other believers—for "surely God guides not him who is prodigal and a liar"[1]—deception directed at non-Muslims, generally known in Arabic as taqiyya, also has Qur'anic support and falls within the legal category of things that are permissible for Muslims. Taqiyya offers two basic uses. The better known revolves around dissembling over one's religious identity when in fear of persecution. The Muslim theory of evolution. Religious groups outraged after German court rules circumcision amounts to 'bodily harm'

Thighing. So, what did the Muslims do for the Jews? By David J Wasserstein, May 24, 2012 Islam saved Jewry. This is an unpopular, discomforting claim in the modern world. But it is a historical truth. Egyptian Actor Guilty of Insulting Islam in Films. Gay Iranian American Najva Sol recalls moment she came out to her parents. By Daily Mail Reporter Updated: 17:52 GMT, 13 February 2012. Interpreting Shari’a. Inside Mecca. The Muslim Jesus. How to discuss Islam with Muslims: Islam's cult of Allah and Muhammad's terror. This next series of posts has less to do with discussing Islam with Muslims, and more to do with non-Muslim ignorance to the vicious cult of Islam. I decided to write this post after receiving many questions by non-Muslims and seeing many lies and obfuscations by Muslims. The dangers of mixing satire and Islam. I went to see Steven Pinker and Matt Ridley last night at Intelligence Squared, talking about Pinker's new book The Better Angels of our Nature in which he shows, powerfully, that we are now living in the safest time to be alive in the history of humanity.