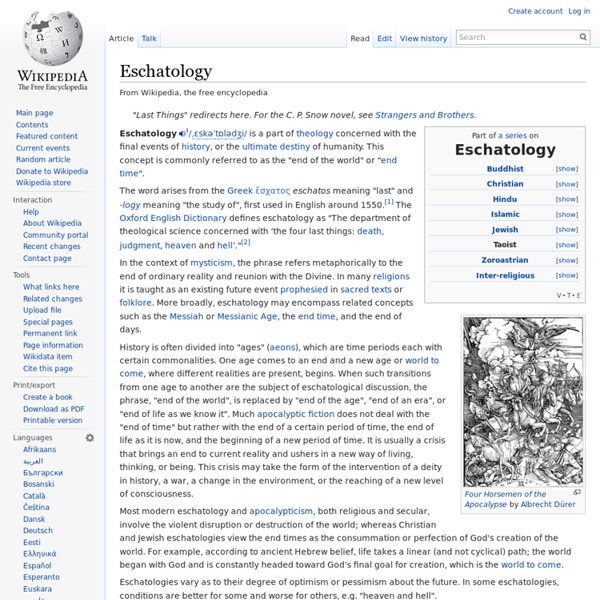 Eschatology i/ˌɛskəˈtɒlədʒi/ is a part of theology concerned with the final events of history, or the ultimate destiny of humanity. This concept is commonly referred to as the "end of the world" or "end time". The word arises from the Greek ἔσχατος eschatos meaning "last" and -logy meaning "the study of", first used in English around 1550.[1] The Oxford English Dictionary defines eschatology as "The department of theological science concerned with ‘the four last things: death, judgment, heaven and hell’. In the context of mysticism, the phrase refers metaphorically to the end of ordinary reality and reunion with the Divine. History is often divided into "ages" (aeons), which are time periods each with certain commonalities. Most modern eschatology and apocalypticism, both religious and secular, involve the violent disruption or destruction of the world; whereas Christian and Jewish eschatologies view the end times as the consummation or perfection of God's creation of the world.

Personal identity What does it take for individuals to persist from moment to moment—or in other words, for the same individual to exist at different moments? Generally, it is the unique numerical identity of persons through time.[3][4] That is to say, the necessary and sufficient conditions under which a person at one time and a person at another time can be said to be the same person, persisting through time.[note 5] In the modern philosophy of mind, this concept of personal identity is sometimes referred to as the diachronic problem[note 6] of personal identity.[5] The synchronic problem[note 7] is grounded in the question of what features or traits characterize a given person at one time. Identity is an issue for both continental philosophy and analytic philosophy. Personal identity theories[edit] Continuity of substance[edit] Bodily substance[edit] Mental substance[edit] Continuity of consciousness[edit] Locke's conception[edit] Or again: PERSON, as I take it, is the name for this self.

Semantic change Examples[edit] Awful—Originally meant "inspiring wonder (or fear)". Used originally as a shortening for "full of awe", in contemporary usage the word usually has negative meaning.Demagogue—Originally meant "a popular leader". It is from the Greek dēmagōgós "leader of the people", from dēmos "people" + agōgós "leading, guiding". (George Chauncey, in his book Gay New York, would put this shift as early as the late 19th century among a certain "in crowd" knowledgeable of gay night life.) Types of semantic change[edit] A number of classification schemes have been suggested for semantic change. However, the categorization of Blank (1998) has gained increasing acceptance:[2] Blank considers it problematic, though, to include amelioration and pejoration of meaning as well as strengthening and weakening of meaning. Forces triggering semantic change[edit] Blank[3] has tried to create a complete list of motivations for semantic change. Practical studies[edit] Theoretical studies[edit] See also[edit]

Object (philosophy) The pragmatist Charles S. Peirce defines the broad notion of an object as anything that we can think or talk about.[1] In a general sense it is any entity: the pyramids, Alpha Centauri, the number seven, a disbelief in predestination or the fear of cats. In a strict sense it refers to any definite being. A related notion is objecthood. Objecthood is the state of being an object. One approach to defining it is in terms of objects' properties and relations. The notion of an object must address two problems: the change problem and the problem of substance. An attribute of an object is called a property if it can be experienced (e.g. its color, size, weight, smell, taste, and location). Because substances are only experienced through their properties a substance itself is never directly experienced. Some philosophies[which?] Bertrand Russell updated the classical terminology with one more term, the fact;[5] "Everything that there is in the world I call a fact." Russell, Bertrand (1948).

Euphemism A euphemism is a generally innocuous word or expression used in place of one that may be found offensive or suggest something unpleasant.[1] Some euphemisms are intended to amuse; while others use bland, inoffensive, and often misleading terms for things the user wishes to dissimulate or downplay. Euphemisms are used for dissimulation, to refer to taboo topics (such as disability, sex, excretion, and death) in a polite way, and to mask profanity.[2] The opposite of euphemism roughly equates to dysphemism. Euphemisms may be used to avoid words considered rude, while still conveying their meaning; words may be replaced by similar-sounding words, gentler words, or placeholders. Some euphemisms have become accepted in certain societies for uncomfortable information; for example, in many English speaking countries, a doctor is likely to say "the patient passed away" rather than "the patient died". Etymology[edit] Formation[edit] Phonetic modification[edit] Figures of speech[edit] Rhetoric[edit]

What is Semiotics? by Eugene Gorny When people find out that I am a specialist in semiotics and that I even give lectures in this subject at the University, they always say, "tell me, what is semiotics?" In the course of time, it became clear to me that this is the normal reaction of normal people to the word "semiotics" itself. Every time as I tried to answer the question and to explain the point of the business I do, I have found that it is not easy at all. Three definitions Perhaps, the most widespread, canonical definition of semiotics is the definition by subject: "Semiotics is a science of signs and/or sign systems". Long ago St. On the other hand, something which is usually perceived as a sign, can in some occasions be perceived (and used) as a simple thing. In brief, there exist a great number of conditions that determine where and when we consider or do not consider a certain thing as a sign (and vice versa). Therefore, semiotics is a means of considering anything as signs and sign systems.

Anatta In Buddhism, the term anattā (Pāli) or anātman (Sanskrit: अनात्मन्) refers to the perception of "not-self", recommended as one of the seven beneficial perceptions,[1] which along with the perception of dukkha, and anicca, is also formally classified among the three marks of existence. Anatta in the Nikayas[edit] The ancient Indian word for self or essence is attā (Pāli) or ātman (Sanskrit), and is often thought to be an eternal substance that persists despite death. Hence the term anatta is often interpreted as referring to the denial of a self or essence. Anatta is used in the early Buddhist texts, as a strategy to view the perception of self as conditioned processes (or even an action), instead of seeing it as an entity or an essence. Taken together with the perceptions of anicca (impermanence) and dukkha (imperfection), anatta (not self) perception is the last of the three marks of existence, which when grasped strategically, leads to dispassion (nibbida). Karma and Anatta[edit]

Peirce's Theory of Signs 1. Basic Sign Structure In one of his many definitions of a sign, Peirce writes: I define a sign as anything which is so determined by something else, called its Object, and so determines an effect upon a person, which effect I call its interpretant, that the later is thereby mediately determined by the former. (EP2, 478) What we see here is Peirce's basic claim that signs consist of three inter-related parts: a sign, an object, and an interpretant. 1.1 The Signifying Element of Signs The very first thing to note is that there are some potential terminological difficulties here. Peirce's idea that a sign does not signify in all respects and has some particular signifying element is perhaps best made clear with an example. 1.2 The Object Just as with the sign, not every characteristic of the object is relevant to signification: only certain features of an object enable a sign to signify it. The sign is the molehill, and the object of this sign is the mole. 1.3 The Interpretant 3. 3.2 Objects

Phenomenology (philosophy) Phenomenology (from Greek: phainómenon "that which appears" and lógos "study") is the philosophical study of the structures of experience and consciousness. As a philosophical movement it was founded in the early years of the 20th century by Edmund Husserl and was later expanded upon by a circle of his followers at the universities of Göttingen and Munich in Germany. It then spread to France, the United States, and elsewhere, often in contexts far removed from Husserl's early work.[1] Phenomenology, in Husserl's conception, is primarily concerned with the systematic reflection on and study of the structures of consciousness and the phenomena that appear in acts of consciousness. This ontology can be clearly differentiated from the Cartesian method of analysis which sees the world as objects, sets of objects, and objects acting and reacting upon one another. There are several assumptions behind phenomenology that help explain its foundations.

Charles Sanders Peirce Charles Sanders Peirce (/ˈpɜrs/,[9] like "purse", September 10, 1839 – April 19, 1914) was an American philosopher, logician, mathematician, and scientist, sometimes known as "the father of pragmatism". He was educated as a chemist and employed as a scientist for 30 years. Today he is appreciated largely for his contributions to logic, mathematics, philosophy, scientific methodology, and semiotics, and for his founding of pragmatism. An innovator in mathematics, statistics, philosophy, research methodology, and various sciences, Peirce considered himself, first and foremost, a logician. He made major contributions to logic, but logic for him encompassed much of that which is now called epistemology and philosophy of science. Life[edit] Peirce's birthplace. Peirce suffered from his late teens onward from a nervous condition then known as "facial neuralgia", which would today be diagnosed as trigeminal neuralgia. Early employment[edit] Johns Hopkins University[edit] Poverty[edit]