Islam, the Quran, and the Five Pillars All Without a Flamewar: Crash Course World History #13 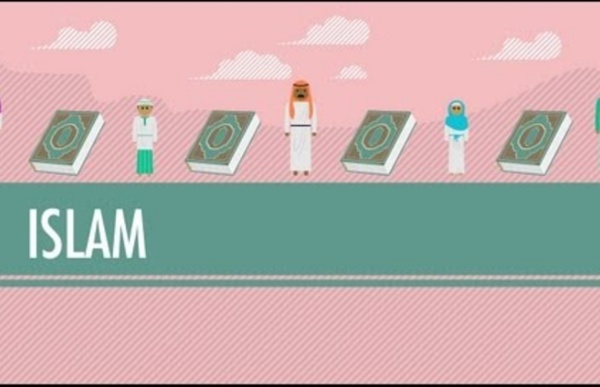 Muslims and Islam: Key findings in the U.S. and around the world Try our email course on Muslims and Islam Learn about Muslims and Islam through four short lessons delivered to your inbox every other day.Sign up now! Muslims are the fastest-growing religious group in the world. The growth and regional migration of Muslims, combined with the ongoing impact of the Islamic State (also known as ISIS or ISIL) and other extremist groups that commit acts of violence in the name of Islam, have brought Muslims and the Islamic faith to the forefront of the political debate in many countries.

Halal vs. Haram For example, a computer software company may produce products used in gambling. A publishing company might print some works that are considered pornographic. Or an agricultural producer might sell its crops exclusively to breweries. Islam Islam (Arabic: الإسلام, Al-Islam) is a religion that believes in one God. In Islam, God is called Allah, which is the Arabic word for God. Some of its teachings and beliefs are written out in the Qur'an. People who follow Islam are called Muslims. They believe that the Qur'an was spoken to Muhammad by the angel Gabriel, and that it consists of words of God. They view Muhammad as a Prophet.

Black Muslims account for a fifth of all U.S. Muslims This is one of an occasional series of posts on black Americans and religion. Even in the early 20th century, when Islam had little presence in most parts of the United States, the religion had a foothold in many black urban communities. Today, black people (not including those of Hispanic descent or mixed race) make up 20% of the country’s overall Muslim population, according to a 2017 Pew Research Center survey. Still, Muslims make up only a small portion of the overall black population in the United States. The vast majority of black Americans are either Christian (79%) or religiously unaffiliated (18%), while about 2% of black Americans are Muslim.

The Third Pillar of Islam: Compulsory Charity - The Religion of Islam Charity is not just recommended by Islam, it is required of every financially stable Muslim. Giving charity to those who deserve it is part of Muslim character and one of the Five Pillars of Islamic practice. Zakat is viewed as "compulsory charity"; it is an obligation for those who have received their wealth from God to respond to those members of the community in need. Devoid of sentiments of universal love, some people know only to hoard wealth and to add to it by lending it out on interest. BBC Bitesize - KS2 Religious Education - What is Islam?

Islam - Five Pillars, Nation of Islam & Definition Islam is the second largest religion in the world after Christianity, with about 1.8 billion Muslims worldwide. Although its roots go back further, scholars typically date the creation of Islam to the 7th century, making it the youngest of the major world religions. Islam started in Mecca, in modern-day Saudi Arabia, during the time of the prophet Muhammad’s life. Today, the faith is spreading rapidly throughout the world.

Compulsory Charity A Practical Remedy of Socio economic Issues Islam is not limited to only religious obligations but also covers all wide range issues of life. It appropriately discusses all stages of human life and its importance. Islam says about all many-sided of social, moral, party-political, and reasonable facets. To improve economic manacles, Islam has also presented a comprehensive organization of system. For that Islam has offered an economic system “Zakat” means compulsory Charity- a Practical Remedy of Socio-economic Issues. Zakat is compulsory for those who are finically detailed and are consecrated with enormous wealth from the Allah Almighty. BBC Bitesize - KS2 Religious Education - Muhammad, Allah and the Koran New Museological Approaches to Islam and Islamic Art - NYU Abu Dhabi Interest in the Islamic world and its art and culture is burgeoning, as new museums and permanent galleries devoted to displaying it proliferate across the globe. At the same time that an unprecedented number of museums present “Islamic art,” scholars within the field have questioned the coherence of the category of Islamic art or Islamic culture. The most challenging critiques have focused on the typical geography of art labeled Islamic, its chronology, and its relationship to religion. This panel brings together several curators and scholars who have worked on recent exhibits that address these questions in different ways, at the Metropolitan Museum, the Children’s Museum of Manhattan, the Smithsonian’s Freer|Sackler galleries and the Brooklyn Museum. To register, please visit the project webpage:

Religions - Islam: Shahadah: the statement of faith Islam Fast Facts Islam is partially based on the Judeo-Christian religions. It has a monotheistic (belief in one God) message, and follows some of the same principles as Christianity and Judaism. The followers of Islam, Muslims, believe in one God, Allah, and believe Muhammad was his prophet. Facts about the Muslims & the Religion of Islam - Toll-free hotline 1-877-WHY-ISLAM By Saulat Pervez Hijab In Islam In the Name of God, the Most Gracious, the Most Merciful Islam’s code of modesty extends to all aspects of one’s life, including attire.

National Geographic Society Hijab is an Islamic concept of modesty and privacy. This concept is not unique to Islam, but embraced by other religions, such as Judaism (where the concept of modesty is called Tzuniut) and Christianity. The Islamic concept of hijab is most often expressed in women’s clothing. Hijab garments range from simple head scarves (called khimaar or simply hijab) to head-to-toe cloaks such as abayas and burqas. This photo gallery illustrates some of the many types of hijab clothing. Although firmly rooted in Islamic tradition, hijab is not strictly defined in the Muslim holy book, the Quran.