Religious Reveal: Men Lag Behind Women in Devoutness. Despite the fact that most historical figures are male — such as Jesus, Muhammad and the Buddha — and that most conservative religious institutions rely on male leaders, including priests and Orthodox rabbis, new data shows that women today tend to be more religious than men. 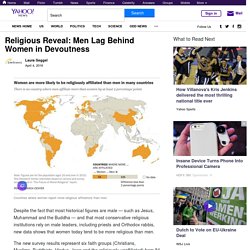 The new survey results represent six faith groups (Christians, Muslims, Buddhists, Hindus, Jews and the religiously unaffiliated) from 84 different countries, according to the Pew Research Center, which collected the data from 2008 to 2015. After sifting through the responses, Pew found that, in general, women are more devout than men on several measures of religious commitment. But among some groups, such as Orthodox Jews and Muslims, men tend to go to religious centers more than women do, likely because they are encouraged to take part in certain services, the report found. [8 Ways Religion Impacts Your Life] Pew asked several questions to get a better idea of how religious people were.

Muslims and Christians. Contradictions. Religion was born of affluence: The surprising origins of moral faith. About 2,500 years ago something changed the way humans think. 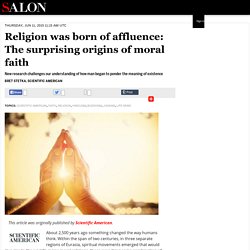 Within the span of two centuries, in three separate regions of Eurasia, spiritual movements emerged that would give rise to the world’s major moral religions, those preaching some combination of compassion, humility and asceticism. Scholars often attribute the rise of these moral religions—Buddhism, Judaism, Islam, Hinduism and Christianity included—to population growth, seeing morality as a necessary social stabilizer in increasingly large and volatile human communities. Yet findings from a recent study published in Current Biology point to a different factor: rising affluence. The authors investigated variables relating to political complexity and living standards. Affluence emerged as a major force in the rise of moral religion, in particular, access to energy. Baumard acknowledges that moral and ascetic qualities probably existed in humans before the major religions emphasizing them.

Bernard J. Daniel Everett on The Atheist Tribe The Pirahã. Egyptian Coptic Christian Pope Dead, Shenouda III; Egypt Leader Died At 88. Church of Christ Statistics – Growth in Light of Larger Population Trends « Kingdom Living. After reading two different posts on membership statistics in the Church of Christ (one by Alan Rouse and the other by Jay Guin) I thought I would toss my hat into the ring and crunch a few numbers. 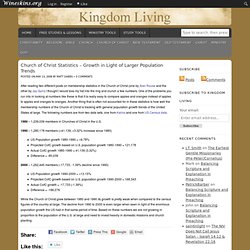 One of the problems you run into in looking at numbers like these is that it is really easy to compare apples and oranges instead of apples to apples and oranges to oranges. Another thing that is often not accounted for in these statistics is how well the membership numbers of the Church of Christ is tracking with general population growth trends of the United States at large. 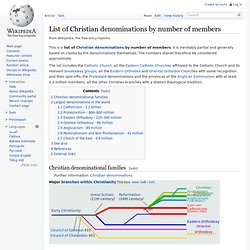 It is inevitably partial and generally based on claims by the denominations themselves. The numbers should therefore be considered approximate. The list includes the Catholic Church, all the Eastern Catholic Churches affiliated to the Catholic Church and its relevant breakaway groups; all the Eastern Orthodox and Oriental Orthodox Churches with some recognition and their spin-offs; the Protestant denominations and the provinces of the Anglican Communion with at least 0.2 million members; all the other Christian branches with a distinct theological tradition. Christian denominational families[edit] (16th century) (11th century) Union. Claims to be the fastest-growing religion. Growth of religion is the spread of religion and the increase of religious adherents around the world. 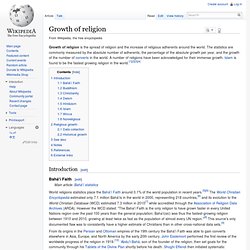 The statistics are commonly measured by the absolute number of adherents, the percentage of the absolute growth per year, and the growth of the number of converts in the world. A number of religions have been acknowledged for their immense growth. Islam is found to be the fastest growing religion in the world.[1][2][3][4] Introduction[edit] Bahá'í Faith[edit] World religions statistics place the Bahá'í Faith around 0.1% of the world population in recent years.[5][6] The World Christian Encyclopedia estimated only 7.1 million Bahá'ís in the world in 2000, representing 218 countries,[6] and its evolution to the World Christian Database (WCD) estimated 7.3 million in 2010[7] while accredited through the Association of Religion Data Archives (ARDA). Buddhism[edit] Christianity[edit] Deism[edit] Hinduism[edit] Islam[edit] In 1990, 935 million people were Muslims. Religions of the world: numbers of adherents; growth rates. Religions of the world Sponsored link. 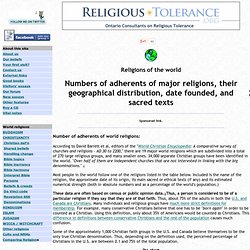 Number of adherents of world religions: According to David Barrett et al, editors of the "World Christian Encyclopedia: A comparative survey of churches and religions - AD 30 to 2200," there are 19 major world religions which are subdivided into a total of 270 large religious groups, and many smaller ones. 34,000 separate Christian groups have been identified in the world. "Over half of them are independent churches that are not interested in linking with the big denominations. " 1.