Circumcision - Does the Quran Approve it? - Genital Mutilation. This page reveals the true face of the practice of circumcision. 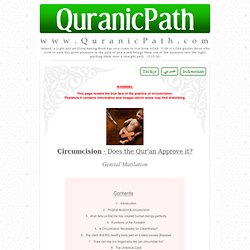 Therefore it contains information and images which some may find disturbing. "The word circumcision means “to cut around”. In male infants, circumcision is an operation which involves tearing the foreskin away from the glans (head) of the penis, cutting along the top of the foreskin, then clamping the foreskin and cutting it off. The skin of the penis is a complex movable 'sheath' with no clear indication of where it should be cut during a circumcision. This means that the amount of foreskin removed from one circumcision to the next can be very different, and no two circumcisions are the same. " (1) Circumcision of Prophet Ibrahim (Abraham) is actually not in the Qur'an.

“They say, ‘Be Jews or Christians and you will be guided.’ Allah. Was Allah The Moon God of Ancient Arab Pagan? 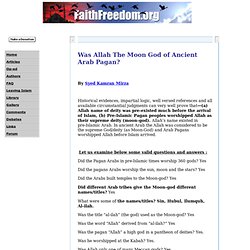 By Syed Kamran Mirza Historical evidences, impartial logic, well versed references and all available circumstantial judgments can very well prove that—(a) Allah name of deity was pre-existed much before the arrival of Islam, (b) Pre-Islamic Pagan peoples worshipped Allah as their supreme deity (moon-god). Allah’s name existed in pre-Islamic Arab. In ancient Arab the Allah was considered to be the supreme God/deity (as Moon-God) and Arab Pagans worshipped Allah before Islam arrived. Let us examine below some valid questions and answers : Did the Pagan Arabs in pre-Islamic times worship 360 gods? Did the pagans Arabs worship the sun, moon and the stars? Did the Arabs built temples to the Moon-god? Did different Arab tribes give the Moon-god different names/titles? To Mutilate in the Name of Jehovah or Allah. By Sami A. 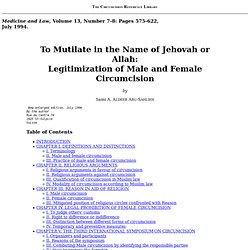 ALDEEB ABU-SAHLIEH New enlarged edition, July 1994 By the author Rue du Centre 74 1025 St-Sulpice Suisse Table of Contents Article 24, paragraph 3 of the Convention on the Rights of the Child, of 20 Nov. 1989, stipulates: States Parties shall take all effective and appropriate measures with a view to abolishing traditional practices prejudicial to the health of children1. Sexual mutilations. Male and Female Circumcision. Is the Qur'an Pure? Book Burning in Early Islam. In response to the request, the Caliph Uthman sent a message to Hafsah since she had the most important original manuscript sheets collected about 634 CE. 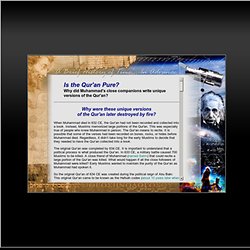 We find written: Caliph Uthman had men who knew the Qur’an to assemble it again. We find written: Having obtained this new version, Uthman ordered all other Qur’ans to be destroyed by fire. Female Circumcision: Multicultural Perspectives - Rogaia Mustafa Abusharaf. Bolokoli, khifad, tahara, tahoor, qudiin, irua, bondo, kuruna, negekorsigin, and kene-kene are a few of the terms used in local African languages to denote a set of cultural practices collectively known as female circumcision. 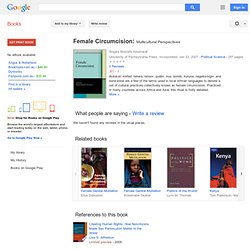 Practiced in many countries across Africa and Asia, this ritual is hotly debated. Supporters regard it as a central coming-of-age ritual that ensures chastity and promotes fertility. Human rights groups denounce the procedure as barbaric. Islam and circumcision. Sunni ForumMay 27, 2008 From Suhaib Jobst As Salaam Alaykum ... 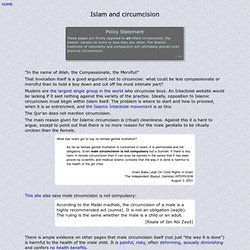 No one claims that it is not an accepted Islamic practice. Everyone accepts that it was practiced by the prophets. It also ignores the fact that people are coming to Islam in great numbers and many of them come from peoples who do not practice this. ... "While circumcision is an incumbent religious duty in Islam, it is not a condition for being a Muslim. "Because of this difference of opinion, scholars are generally easy-going and gentle with recent converts to Islam on the issue of circumcision. " "Hence it is a greatly meritorious sunnah as well as physically beneficial to perform this act.

"However, it should be remembered here, that he who opts not to be circumcised should regularly clean the area underneath the foreskin of his sex organ because, in Islam cleanliness of the body is obligatory for performing prayers. " I myself am a proud Muslim revert of German, Spanish and Flemish ancestry. So what are our priorities?