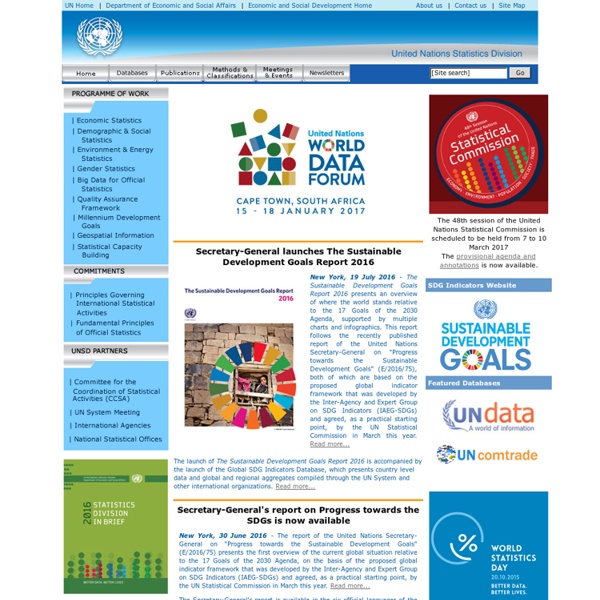 New York, 1 June 2016 - The chair of the Statistical Commission, Ms. Wasmalia Bivar of Brazil, addressed the Economic and Social Council (ECOSOC) on 1 June during its Coordination and Management Meeting. Ms. Bivar, who provided her briefing by videolink, informed the Council that the Statistical Commission at its last session in March had agreed “as a practical starting point” on a global indicator framework, which had been developed by the Inter-agency and Expert Group on Sustainable Development Goal Indicators (IAEG-SDGs). She also informed the Council of the recent work of the High-level Group for Partnership, Coordination and Capacity-Building for statistics for the 2030 Agenda for Sustainable Development and the plans for a first UN World Data Forum to be held in Capetown, South Africa, in January 2017. The presentation (English, Spanish) was followed by a short Q&A session.

The World Factbook People from nearly every country share information with CIA, and new individuals contact us daily. If you have information you think might interest CIA due to our foreign intelligence collection mission, there are many ways to reach us. If you know of an imminent threat to a location inside the U.S., immediately contact your local law enforcement or FBI Field Office. For threats outside the U.S., contact CIA or go to a U.S. UNdata COMET Welcome to the CoMET website CoMET is a programme of international railway benchmarking. It is made up of a consortium of large metro systems from around the world - Beijing, Berlin, Guangzhou, Hong Kong, London, Mexico City, Madrid, Moscow, New York, Paris, Santiago, Shanghai, Sao Paulo and Taipei. The four main objectives of CoMET are: 1.

Nate Silver: Eight cool things journalists should know about statistics Journalists need to bring science and forecasting into their news coverage, despite the fact that predicting outcomes is viewed as “uncouth” in some newsrooms, statistician Nate Silver told a gathering at the Online News Association conference Friday. Silver has achieved rock-star status in the world of data journalism thanks to correctly calling the 2012 presidential winner in all 50 states, not to mention his smart analysis of baseball and a best-selling book about why predictions fail. A critic of stories that use numbers in inaccurate or inexact ways, Silver offered eight points that journalists should know if they use statistics: 1. Statistics aren’t just numbers.

World Wealth Report 2011 Wealth and population of global HNWIs surpass pre-crisis levels in nearly every region as HNWI wealth reaches US$42.7 trillion The world’s high net worth individuals (HNWIs) expanded in population and wealth in 2010 surpassing 2007 pre-crisis levels in nearly every region, according to the 15th annual World Wealth Report from Merrill Lynch Global Wealth Management and Capgemini. The World Wealth Report covers 71 countries in the market-sizing model, accounting for more than 98% of global gross national income and 99% of world stock market capitalization. The report has built a strong and lasting reputation as the industry benchmark for HNWIs market sizing—originally at a global and regional level but increasingly at a country level. Download the Report to learn more about trends in HNWI wealth worldwide.

Open data An introductory overview of Linked Open Data in the context of cultural institutions. Clear labeling of the licensing terms is a key component of Open data, and icons like the one pictured here are being used for that purpose. Overview[edit] The concept of open data is not new; but a formalized definition is relatively new—the primary such formalization being that in the Open Definition which can be summarized in the statement that "A piece of data is open if anyone is free to use, reuse, and redistribute it — subject only, at most, to the requirement to attribute and/or share-alike

General Social Survey The GSS contains a standard 'core' of demographic, behavioral, and attitudinal questions, plus topics of special interest. Many of the core questions have remained unchanged since 1972 to facilitate time-trend studies as well as replication of earlier findings. The GSS takes the pulse of America, and is a unique and valuable resource. It has tracked the opinions of Americans over the last four decades. Trends American Time Use Survey Home Page The American Time Use Survey (ATUS) measures the amount of time people spend doing various activities, such as paid work, childcare, volunteering, and socializing. In 2015, 38% of workers in management do some work from home on days they work In 2015, 38 percent of workers in management, business, and financial operations occupations, and 35 percent of workers in professional and related occupations, did some or all of their work from home on days they worked. Workers in other occupations were less likely to work from home. HTML | PDF | RSS