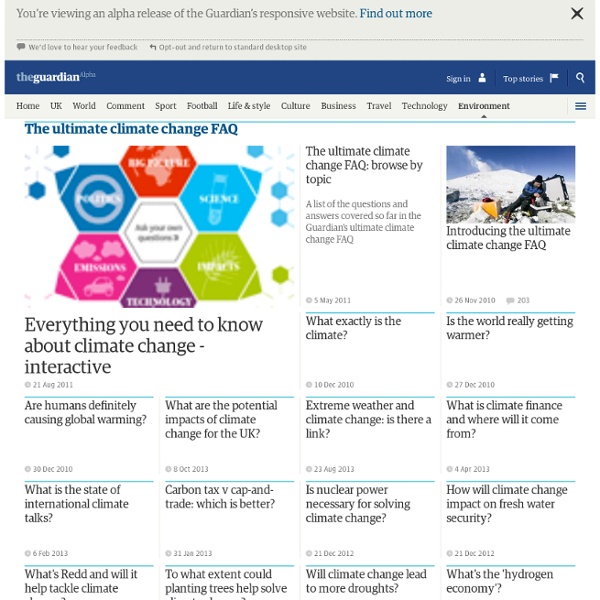 Home Apps That Challenge Kids to Solve Environmental Issues By Tanner Higgin, Graphite Environmental education for most adults used to mean learning a little bit about recycling and planting some trees on Arbor Day. We didn’t delve into ecology as much as we skimmed the surface. But things have gotten more complex since then, and the topic of climate change has brought environmental education to the forefront. At its best, environmental education gets students grappling with big, cross-disciplinary issues like sustainable design and renewable energy. 1. This app provides an overview of environmental issues, particularly pollution, for younger students. 2. Enercities is a little more sophisticated than Little Green Island. 3. It’s important to learn not just about sustainability and being environmentally conscious, but also about what’s at stake in these efforts. 4. Related

WWF: Climate change Carbon dioxide, or CO2, is the most significant of the gases in our atmosphere which keep the Earth warm. 4 billion years ago its concentration in the atmosphere was much higher than today - 80% compared to today's 0.03%. But most of it was removed through photosynthesis over time. All this carbon dioxide became locked in organisms and then minerals such as oil, coal and petroleum inside the Earth's crust. A natural carbon dioxide cycle keeps the amount of CO2 in our atmosphere in balance. The amount of naturally produced CO2 is almost perfectly balanced by the amount naturally removed.

Harvest Boon Villa Welpeloo in Enschede, the Netherlands, doesn't look like a recycled building. Its austere lines and spacious interior have nothing of the junkyard aesthetic about them. Yet despite appearances, it's reused to the bones. To accomplish this, architects Jan Jongert and Jeroen Bergsma of 2012Architects reversed the typical order of the design process—first house, then materials—and instead began by scouting the local area for items to recycle. Villa Welpeloo was the architects' first house, designed for clients Tjibbe Knol and Ingrid Blans. "Reused materials account for 60 percent of the structure," says Jongert. The architects came to the idea of superuse architecture when they were student at Delft University of Technology. So when they received the commission for Villa Welpeloo (Jongert and Blans have been friends since Jongert was eight), step one was to create a "harvest map," an inventory of possible suppliers from within a nine-mile radius of the building site.

Sea Level Rise Explorer - Global Warming Art From Global Warming Art Elevation Relative to Sea Level (m) Description The map shown above allows you to explore the regions of the Earth that are most vulnerable to sea level rise. As with other Google Maps, you can click-and-drag the window to scroll or double click to zoom. Potential for Sea Level Rise As global warming progresses, sea level is expected to rise primarily due to the melting of continental ice sheets in Greenland and Antarctica. During the twentieth century, sea level rose 20 cm. However, even if global temperatures stabilize in 2100, the full magnitude of sea level rise is expected to take far longer to develop. Accuracy of Maps The sea level data appearing in my maps is based primarily on version 2 of NASA's Shuttle Radar Topography Mission (SRTM), with post-processing by CGIAR to fill-in voids using data from other sources. The SRTM data are limited to a region of 60 S to 60 N latitude. Related Materials References ^ [abstract] [DOI] Knutti, Reto and Thomas F.

WWF: Climate Change | Threats Shop to Support WWF Shop at AmazonSmile to support our global conservation efforts every time you buy. It’s the same Amazon.com you know—same products, same prices—and 0.5% of each purchase price is donated back to WWF. Road train technology can drive your car for you - tech - 18 January 2011 Video: Road train drives your car for you Letting drivers read a book, surf the net or possibly even have a snooze while behind the wheel may not sound like the best way to improve road safety. Yet that's precisely the aim of an automatic driving system that has just been road-tested for the first time in Sweden. By linking cars together into road trains or "platoons" to form semi-autonomous convoys under the control of a professional lead driver, the hope is that average road speeds can be reduced, improving fuel consumption and cutting congestion. In a test performed late last month, Volvo, one of the partners of the Safe Road Trains for the Environment (SARTRE) Project, showed that a single car could join a platoon, be "enslaved" by a lead truck, and then exit safely. Discussions are now under way to carry out tests on public roads in Spain next year. Your sensors are mine now Would you trust it? More From New Scientist Germany's energy revolution on verge of collapse (New Scientist)

Climate Change, Deforestation, Biomes and Ocean Currents, Plankton, Endangered Species - Earth Web Site Click for more detail Thermohaline Change Evidence is growing that the thermohaline current may be slowed or stopped by cold fresh water inputs to the Arctic and North Atlantic oceans. This could occur if global warming is sufficient to cause large scale melting of arctic sea ice and the Greenland ice sheet. "Diatoms (a kind of phytoplankton) are estimated to "scrub" roughly as much CO2 from the atmosphere each year as all the world's rainforests. "Net primary productivity is the mass of plant material produced each year on land and in the oceans by photosynthesis using energy from sunlight. Population and consumption growth Infrastructure development (dams, urban growth, highways) Land conversion (deforestation, agriculture, urban growth) Overharvesting / overexploitation (overfishing, wasteful irrigation) Release of pollutants (human waste, agricultural / industrial chemicals, radioactivity) Introduction of exotic species (replacing and overwhelming indigenous species). 5

What is climate change? Media playback is unsupported on your device BBC News looks at what we know and don't know about the Earth's changing climate. What is climate change? The planet's climate has constantly been changing over geological time. The global average temperature today is about 15C, though geological evidence suggests it has been much higher and lower in the past. However, the current period of warming is occurring more rapidly than many past events. What is the "greenhouse effect"? The greenhouse effect refers to the way the Earth's atmosphere traps some of the energy from the Sun. The energy that radiates back down to the planet heats both the lower atmosphere and the surface. Scientists believe we are adding to the natural greenhouse effect with gases released from industry and agriculture (known as emissions), trapping more energy and increasing the temperature. Most man-made emissions of CO2 are through the burning of fossil fuels, as well as through cutting down carbon-absorbing forests.

Top Ten Most Nutritious Vegetables and How to Grow Them in Your Garden A perfectly ripe, juicy tomato, still warm from the sun. Sweet carrots, pulled from the garden minutes (or even seconds!) before they're eaten. Growing your own vegetables is one of those activities that balances practicality and indulgence. Broccoli is high in calcium, iron, and magnesium, as well as vitamins A, B6, and C. How to grow broccoliGrow broccoli in containers: One broccoli plant per pot, pots should be 12 to 16 inches deep.What to watch out for: Cabbage worm. 2. There is nothing like peas grown right in your own garden — the tender sweetness of a snap pea just plucked from the vine is unlike anything you can buy in at a store. How to grow peasGrow peas in containers: Sow peas approximately 2 inches apart in a pot that is at least 10 inches deep. 3. While snap beans (green beans/wax beans) are a great addition to any garden, it's the beans we grow as dried beans that are real nutritional powerhouses. 4. 5. 6. 7. 8. 9. 10. OK, I cheated here. Try growing one or two (or all!)