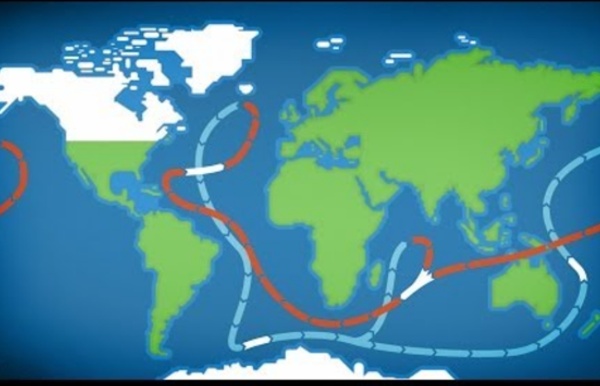 Radioactive 'pooh sticks' trace carbon's ocean journey Image copyright Getty Images Radioactive iodine from nuclear reprocessing plants in the UK and France has been detected deep in the waters near Bermuda. Scientists say the contaminants take a circuitous route travelling via the Arctic Ocean and down past Greenland. Evidence The Earth's climate has changed throughout history. Just in the last 650,000 years there have been seven cycles of glacial advance and retreat, with the abrupt end of the last ice age about 7,000 years ago marking the beginning of the modern climate era — and of human civilization. Most of these climate changes are attributed to very small variations in Earth’s orbit that change the amount of solar energy our planet receives. Scientific evidence for warming of the climate system is unequivocal. The current warming trend is of particular significance because most of it is very likely human-induced and proceeding at a rate that is unprecedented in the past 1,300 years.1 Earth-orbiting satellites and other technological advances have enabled scientists to see the big picture, collecting many different types of information about our planet and its climate on a global scale.

*****Thermohaline circulation: Climate Running AMOC Thermohaline circulation (n.): deep ocean current driven by variations in salinity and temperature. I used to love watching the weather forecast when I was a kid, because I thought it was a cartoon. There were lots of colorful arrows going every which way and a man waving his arms like a snake charmer. I had no idea what any of it meant. Suddenly, I know more than I ever wanted to.

Understanding the Link Between Climate Change and Extreme Weather On This Page: Changes in Extreme Weather and Climate Events Scientists study many aspects of change in extreme weather and climate events. These include: Seeing global winds - Ocean Navigator - March/April 2014 Feb 28, 2014 by tim queeney The “earth” website by Cameron Beccario is an intriguing way to get a feel for global wind circulation. This view from “earth” shows winds high in the atmosphere. You’ve heard of working for peanuts, but how about for pickled herring? Glaciers Topics Glaciers Climate Description Adjust mountain snowfall and temperature to see the glacier grow and shrink. Use scientific tools to measure thickness, velocity and glacial budget.

Giant iceberg poised to break off from Antarctic shelf A giant iceberg, with an area equivalent to Trinidad and Tobago, is poised to break off from the Antarctic shelf. A thread of just 20km of ice is now preventing the 5,000 sq km mass from floating away, following the sudden expansion last month of a rift that has been steadily growing for more than a decade. The iceberg, which is positioned on the most northern major ice shelf in Antarctica, known as Larsen C, is predicted to be one of the largest 10 break-offs ever recorded. Professor Adrian Luckman, a scientist at Swansea University and leader of the UK’s Midas project, said in a statement: “After a few months of steady, incremental advance since the last event, the rift grew suddenly by a further 18km during the second half of December 2016.