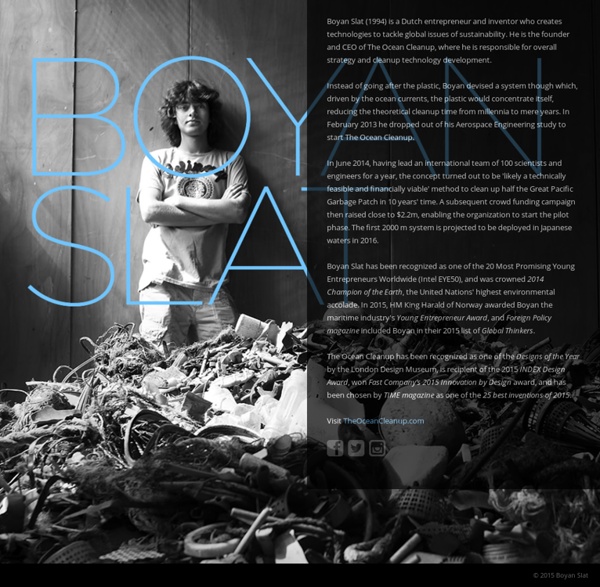 This Brilliant Teen Has A 10-Year Plan To Clean Up The Pacific Ocean When diving in Greece, Boyan Slat discovered that there was more plastic than fish in the water. The 19-year-old was not only inspired to take action, but he has come up with plan to clean up half the garbage patch in the Pacific Ocean -- in just 10 years. With millions of tons of plastic making its way into the oceans, the environmental activist devised a feasible and efficient way to extract it from the water using "the currents to [his] advantage" by attaching a floating structure to the sea bed to capture the waste. Watch Slat explain his idea in the video above. "I don't really view my age as a disadvantage to get these things done. Simply I've thought about how to tackle the problem and I've worked for a number of years to bring it closer to reality," says Slat, who is founder and president of the Ocean Cleanup Foundation. For more information, check out Slat's website and visit theoceancleanup.com. [h/t Elite Daily] Follow HuffPost Teen on Twitter | Instagram | Tumblr | Pheed | video

Young humpback whale freed from crab fishing lines SAN JOSE, Calif. — The passengers on the Point Sur Clipper had spent the morning of April 27 whale watching in Monterey Bay. At first, they didn’t notice anything wrong when they spotted the humpback. But unlike the other whales, the 25-foot-long young adult stuck near the surface. It didn’t dive down to feast on the blooms of krill that attract humpbacks to the bay. “It wouldn’t fluke up,” said Nancy Black, a marine biologist on board the ship that day. Black called the U.S. Passing Through Tricky Waters Centuries of whaling had nearly killed off the whale population. Most crab pots are removed from the water in the winter, after the largest crabs are taken, said Pete Kalvass, a marine biologist with the California Department of Fish and Wildlife. Humpback Gets GPS Tracking Tag Black called the Coast Guard that Sunday. By 3 p.m., the team had clipped a satellite tag to the gear already wrapped around the whale. By now the seas were churning. Nervous Whale Watching Free To Swim Away

The Ocean Cleanup - Boyan Slat In 2011, together with friend Tan Nguyen, Boyan Slat embarked on writing his final paper in the last year of secondary education, researching the possibility of remediation world’s oceanic garbage patches. During this project, they performed analyses on concentration of particles between 90 micron and 333 micron, plastic/plankton separation, plastic depth measurement devices and amount of plastic within the top layer of the gyres. Spending over 500 hours on the paper (instead of the required 80 hours), it has won several final paper prizes, including Best Technical Design 2012 at the Delft University of Technology. Boyan continued the development of his concept during the summer of 2012, and revealed it several months later at TEDxDelft 2012. At iSea Clash of The Concepts, The Ocean Cleanup was awarded the second prize by the Dutch Ministry of Infrastructure and the Environment.

The Fun Theory - Video Contest Type to Search Green Living How Hotels Are Getting Smarter About Stopping Waste Greener housekeeping is just the beginning when it comes to environmental initiatives major hotel chains are embracing. By Miriam Arond Home Ideas Share This Spiky Invention Won't Let You Dawdle in the Shower For the sake of the environment — and a good laugh. Smart Ways to Save Around the House Good Housekeeping + Cree A few quick fixes can add up to significant energy savings. Life 6 Climate Change Myths — Debunked! Don't fall for these misconceptions. A 150-Year-Old Pennsylvania Barn Gets a Second Chance Piece by piece, the historic structure will be saved. Want a home that looks beautiful and helps the environment? These Tiny Homes Can Be Built in a Day Get in on the small space movement without the wait. Healthy Recipes & Meal Ideas The New Dirty Dozen: 22 Foods to Eat Organic Here are the latest culprits full of pesticide residue, plus more you should also know. This Cute Home Is Not What It Seems How to Live Greener

Apply to be an Ambassador! | Akshaya Pātra USA About Youth Ambassadors Akshaya Patra is looking for driven, motivated youth activists, like you, who are passionate about creating a more just world for themselves and others. This is a voluntary role which is open to junior or high school students living anywhere in the United States. As a Youth Ambassador you will develop new skills while working to expand the reach of Akshaya Patra. The program offers the unique opportunity for youth leaders to build leadership, networking, and public presentation skills while improving the lives of over 1.4 million children in India. As a Youth Ambassador, you will: Use Virtual classrooms to learn skills in public speaking, networking, donor cultivation, and fundraising;Make presentations and enroll new donors;Help Akshaya Patra build a grassroots movement in the US. Qualifying Graduates will receive: Program Expectations: Program Commitment: Time Commitments: Applying: Applications for Admission to the Youth Ambassadors Program are on a rolling basis.

Boyan Slat “Human history is basically a list of things that couldn't be done, and then were done.” Boyan Slat (Delft, 1994) combines environmentalism, creativity and technology to tackle global issues of sustainability. Currently working on oceanic plastic pollution, he believes current prevention measures will have to be supplemented by active removal of plastics in order to succeed. “It will be very hard to convince everyone in the world to handle their plastics responsibly, but what we humans are very good in, is inventing technical solutions to our problems. And that’s what we’re doing.” Besides leading The Ocean Cleanup, Boyan is an Aerospace Engineering student at the Delft University of Technology, and is an avid photographer and diver. At age 14, he was awarded the Best Idea of South-Holland award, and a Guinness World Record.

Eco Bath by Jang Woo-seok Use Your Water Twice It goes in the sink, then it goes in the toilet. What’s that? It’s your water bill! You’ve got to conserve in any way you can. You simply must read this little poem written about this toilet system by it’s designer, Jang Woo-seok: Express the flow of water. Fresh, yes? Jang gets the idea for the Eco Bath from the naturally flowing waterways all around us. Designer: Jang Woo-seok Zika Virus Rumors and Theories That You Should Doubt Mounting evidence points to Zika. The outbreak of microcephaly began in northeastern Brazilian cities where doctors had already seen thousands of people with “doença misteriosa” — the mystery disease — which was later proved to be caused by the Zika virus. Although there is no rapid test for Zika, the symptoms are easily recognized — a rash, bloodshot eyes, fever and joint pain, in large numbers of patients who are almost never dangerously ill. Although they initially misdiagnosed it, Brazilian doctors knew for months that they had a large outbreak of an unusual disease on their hands. Within weeks after the “mystery disease” appeared, doctors began noticing an uptick in adult paralysis — Guillain-Barré syndrome, an auto-immune disease that can be triggered by viral infections. About a year after the outbreak began in northeast Brazil, cases of microcephaly began appearing among newborns there.

Ingenious 19-year-old Develops Plan to Clean up Oceans in 5 Years Image Credit / boyanslat.com By: Amanda Froelich, True Activist. With millions of tons of garbage dumped into the oceans annually and repeat incidence of oil spills like the Deepwater Horizon Disaster, it’s the Ocean which has taken the brunt of unsustainable methods from man. In effect, it’s estimated almost 100,000 marine animals are killed due to debris entanglement and continually rising pollution. To a degree, individual lessening of consumerism and utilizing sustainable methods to re-use and eliminate waste is very beneficial. Slat’s idea consists of an anchored network of floating booms and processing platforms that could be dispatched to garbage patches around the world. Economically, the Ocean Array Project also rises to the top due to its sustainable construct; it’s completely self-supportive, by receiving energy from the sun, currents, and waves. To find out more about the project and to contribute, click here. Sources: Boyan Slat Inhabitat Trending on the Web

Home - iCap – Innovative CO2 Capture Eco-Enegry Flooring System by Stephen Chan Wing Tak Piezoelectricity Generation X! Electric polarization in a substance resulting from the application of mechanical stress – that’s what Piezoelectricity is. It’s used in these: Eco-Enegry Flooring System pads that use the pressure applied by people walking, running, rolling over to squeeze piezoelectric blocks. Upon squeezing, energy is generated and stored on a paper battery system. Then, THEN, the energy is used for, what else? LED lights! The pads are actually made up of 6 layers. Easy to transport, easy to use, basically perfect. Cost effective? Designer: Stephen Chan Wing Tak

Polar Bears and Climate Change Floods. Droughts. Heat waves. Massive storms. Climate change is not just about polar bears, the iconic symbol of a melting Arctic. It affects the entire planet. In fact, if our chief scientist, Dr. "Events like these will continue to increase in number and severity as the world continues to warm." What's causing climate change? What's causing climate change? Greenhouse gases (GHGs) in the atmosphere act like a blanket that keeps the earth warm. Other factors such as deforestation have added to the problem. Do scientists agree about climate change? The laws of physics dictate that the world will grow warmer and warmer as greenhouse gas concentrations rise. Are scientists still debating climate change? The important point to remember is that natural fluctuations in the climate system will continue with global warming, but the baseline will climb higher and higher. And once we cross those thresholds, it will be bad news not only for polar bears—but countless other species, including humans.