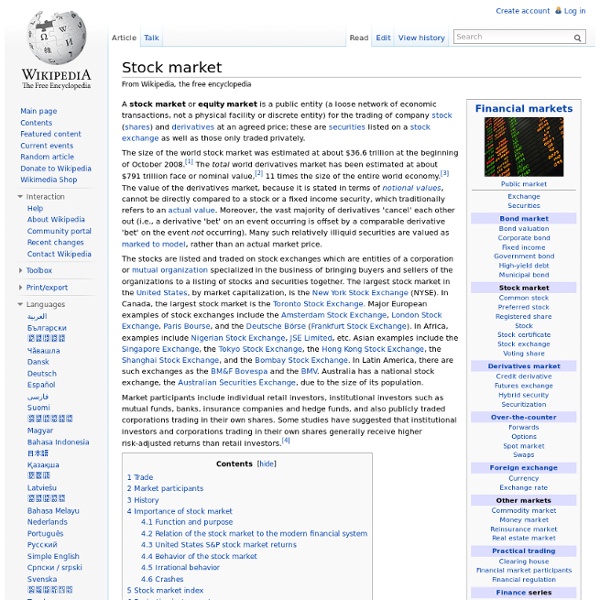 Size of market[edit] Stocks are partitioned in various ways. One common way is by the country where the company is domiciled. For example, Nestle, Roche, and Novartis are domiciled in Switzerland, so they are part of the Swiss stock market. The size of the world stock market was estimated at about $36.6 trillion at the beginning of October 2008.[1] The total world derivatives market has been estimated at about $791 trillion face or nominal value,[2] 11 times the size of the entire world economy.[3] The value of the derivatives market, because it is stated in terms of notional values, cannot be directly compared to a stock or a fixed income security, which traditionally refers to an actual value. Stock exchanges[edit] Stocks are listed and traded on stock exchanges which are entities of a corporation or mutual organization specialized in the business of bringing buyers and sellers of the organizations to a listing of stocks and securities together. Trade[edit] Market participants[edit] Related:  Economics

Balance of trade The commercial balance or net exports (sometimes symbolized as NX), is the difference between the monetary value of exports and imports of output in an economy over a certain period, measured in the currency of that economy. It is the relationship between a nation's imports and exports.[1] A positive balance is known as a trade surplus if it consists of exporting more than is imported; a negative balance is referred to as a trade deficit or, informally, a trade gap. The balance of trade is sometimes divided into a goods and a services balance. Understand- Balance of Trade[edit] Trade, in general connotation, means the purchase and sales of commodities. Policies of early modern Europe are grouped under the heading mercantilism. Definition[edit] The balance of trade forms part of the current account, which includes other transactions such as income from the net international investment position as well as international aid. Factors that can affect the balance of trade include:

Unemployment Unemployment occurs when people are without work and actively seeking work.[1] The unemployment rate is a measure of the prevalence of unemployment and it is calculated as a percentage by dividing the number of unemployed individuals by all individuals currently in the labor force. During periods of recession, an economy usually experiences a relatively high unemployment rate.[2] According to International Labour Organization report, more than 197 million people globally or 6% of the world's workforce were without a job in 2012.[3] There remains considerable theoretical debate regarding the causes, consequences and solutions for unemployment. Classical economics, New classical economics, and the Austrian School of economics argue that market mechanisms are reliable means of resolving unemployment. Definitions, types, and theories[edit] On the other hand, cyclical unemployment, structural unemployment, and classical unemployment are largely involuntary in nature. Full employment[edit]

Voluntary sector The voluntary sector or community sector (also non-profit sector or "not-for-profit" sector) is the sphere of social activity undertaken by organizations that are not for profit[1] and non-governmental. This sector is also called the third sector, in reference to the public sector and the private sector. Civic sector or social sector are other terms for the sector, emphasizing its relationship to civil society. Given the diversity of organizations that comprise the sector, Peter Frumkin prefers "non-profit and voluntary sector".[2] Country-specific[edit] France[edit] Discourse on the "third sector" began in the 1970s in France as a result of the crisis in the welfare state.[3] United Kingdom[edit] The Cabinet Office of the British government until 2010 had an Office of the Third Sector that defined the "third sector" as "the place between State and (the) private sector India[edit] Israel[edit] Significance to society and the economy[edit] Sub-sectors[edit] Concerns[edit] See also[edit] Examples:

Government debt Government debt (also known as public debt, national debt and sovereign debt)[1][2] is the debt owed by a central government. (In federal states, "government debt" may also refer to the debt of a state or provincial, municipal or local government.) By contrast, the annual "government deficit" refers to the difference between government receipts and spending in a single year, that is, the increase of debt over a particular year. Government debt is one method of financing government operations, but it is not the only method. Governments can also create money to monetize their debts, thereby removing the need to pay interest. But this practice simply reduces government interest costs rather than truly canceling government debt,[3] and can result in hyperinflation if used unsparingly. As the government draws its income from much of the population, government debt is an indirect debt of the taxpayers. History[edit] The sealing of the Bank of England Charter (1694) By country[edit] Risk[edit]

Inflation In economics, inflation is a sustained increase in the general price level of goods and services in an economy over a period of time.[1] When the price level rises, each unit of currency buys fewer goods and services. Consequently, inflation reflects a reduction in the purchasing power per unit of money – a loss of real value in the medium of exchange and unit of account within the economy.[2][3] A chief measure of price inflation is the inflation rate, the annualized percentage change in a general price index (normally the consumer price index) over time.[4] The opposite of inflation is deflation. History[edit] Annual inflation rates in the United States from 1666 to 2004. Historically, infusions of gold or silver into an economy also led to inflation. The adoption of fiat currency by many countries, from the 18th century onwards, made much larger variations in the supply of money possible. Related definitions[edit] Measures[edit] Other common measures of inflation are: Effects[edit] where

Interest rate An interest rate is the rate at which interest is paid by borrowers (debtors) for the use of money that they borrow from lenders (creditors). Specifically, the interest rate is a percentage of principal paid a certain number of times per period for all periods during the total term of the loan or credit. Interest rates are normally expressed as a percentage of the principal for a period of one year, sometimes they are expressed for different periods like for a month or a day. Different interest rates exist parallelly for the same or comparable time periods, depending on the default probability of the borrower, the residual term, the payback currency, and many more determinants of a loan or credit. For example, a company borrows capital from a bank to buy new assets for its business, and in return the lender receives rights on the new assets as collateral and interest at a predetermined interest rate for deferring the use of funds and instead lending it to the borrower. is widely used.

Gross national product Gross national product (GNP) is the market value of all the products and services produced in one year by labor and property supplied by the citizens of a country. Unlike Gross Domestic Product (GDP), which defines production based on the geographical location of production, GNP allocates production based on ownership. GNP does not distinguish between qualitative improvements in the state of the technical arts (e.g., increasing computer processing speeds), and quantitative increases in goods (e.g., number of computers produced), and considers both to be forms of "economic growth".[1] Basically, GNP is the total value of all final goods and services produced within a country in a particular year, plus income earned by its citizens (including income of those located abroad)(no need to minus income of non resident as income includes of only its citizen). Gross National Product (GNP) is often contrasted with Gross Domestic Product (GDP). Use[edit] GNP Growth[edit] See also[edit] Sources[edit]

Exchange rate In finance, an exchange rate (also known as a foreign-exchange rate, forex rate, FX rate or Agio) between two currencies is the rate at which one currency will be exchanged for another. It is also regarded as the value of one country’s currency in terms of another currency.[1] For example, an interbank exchange rate of 119 Japanese yen (JPY, ¥) to the United States dollar (US$) means that ¥119 will be exchanged for each US$1 or that US$1 will be exchanged for each ¥119. In this case it is said that the price of a dollar in terms of yen is ¥119, or equivalently that the price of a yen in terms of dollars is $1/119. Exchange rates are determined in the foreign exchange market,[2] which is open to a wide range of different types of buyers and sellers where currency trading is continuous: 24 hours a day except weekends, i.e. trading from 20:15 GMT on Sunday until 22:00 GMT Friday. Retail exchange market[edit] Quotations[edit] Exchange rates display in Thailand Main article: Currency pair

Gross domestic product Gross domestic product (GDP) is defined by the Organisation for Economic Co-operation and Development (OECD) as "an aggregate measure of production equal to the sum of the gross values added of all resident, institutional units engaged in production (plus any taxes, and minus any subsidies, on products not included in the value of their outputs)."[2] GDP estimates are commonly used to measure the economic performance of a whole country or region, but can also measure the relative contribution of an industry sector. This is possible because GDP is a measure of 'value added' rather than sales; it adds each firm's value added (the value of its output minus the value of goods that are used up in producing it). The more familiar use of GDP estimates is to calculate the growth of the economy from year to year (and recently from quarter to quarter). History[edit] The history of the concept of GDP should be distinguished from the history of changes in ways of estimating it. Determining GDP[edit]