The Difference Between Doing Projects Versus Learning Through Projects 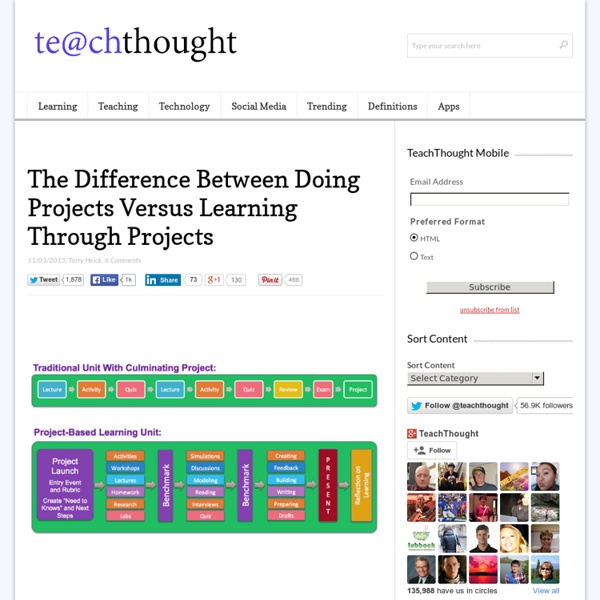 The Difference Between Doing Projects Versus Learning Through Projects by Terry Heick We’ve clarified the difference between projects and project-based learning before. Projects are about the product, while project-based learning is about the process. Projects are generally teacher-directed, universal, and tangent to the learning, while project-based learning is student-centered, personal, and the learning pathway itself. Paul Curtis recently shared this excellent visual on twitter that takes a different approach to clarifying the difference, looking at it from the perspective of curriculum planning and instructional design. Note that this is only one approach. Thoughts, comments, or related resources in the comments below. The Difference Between Doing Projects Versus Learning Through Projects

Brainstorming: More Questions Than Answers | Product Talk There’s been a lot of confusion around brainstorming these days. First, there was the New Yorker article by Jonah Lehrer claiming that brainstorming doesn’t work. Scott Berkun wrote a rebuttal arguing Lehrer’s logic was flawed. Twitter exploded with comments. I’m going to try to make sense of it all. What is brainstorming? The term was introduced by Alex Faickney Osborn in his books, Your Creative Power and Applied Imagination , from the late 1940s / early 1950s. Osborn argued in order for brainstorming to work, people had to overcome social inhibitions and focus on generating a large number of ideas. * Focus on quantity. * Withhold criticism. * Welcome unusual ideas. * Combine and improve ideas. Some of these might sound familiar, the first two in particular, as these are what we typically associate with brainstorming. Why brainstorming might not work? , Leherer’s book, does. To be clear, this is not the same study that Berkun criticizes in his rebuttal. This study is well designed. . . .

What Project-Based Learning Is — and What It Isn’t Screenshot/High Tech High The term “project-based learning” gets tossed around a lot in discussions about how to connect students to what they’re learning. Teachers might add projects meant to illustrate what students have learned, but may not realize what they’re doing is actually called “project-oriented learning.” And it’s quite different from project-based learning, according to eighth grade Humanities teacher Azul Terronez. Terronez, who teaches at High Tech Middle, a public charter school in San Diego, Calif says that when an educator teaches a unit of study, then assigns a project, that is not project-based learning because the discovery didn’t arise from the project itself. “If you inspire them to care about it and draw parallels with their world, then they care and remember.” For Terronez, the goal is to always connect classroom learning to its applications in the outside world. When Terronez assigns a writing project, it’s rarely just for a grade. Related

Say What? 5 Ways to Get Students to Listen Ah, listening, the neglected literacy skill. I know when I was a high school English teacher this was not necessarily a primary focus; I was too busy honing the more measurable literacy skills -- reading, writing, and speaking. But when we think about career and college readiness, listening skills are just as important. This is evidenced by the listening standards found in the Common Core and also the integral role listening plays in collaboration and communication, two of the four Cs of 21st century learning. So how do we help kids become better listeners? Strategy #1: Say it Once Repeating ourselves in the classroom will produce lazy listening in our students. Of course you don't want to leave distracted students in the dust so for those few who forgot to listen, you can advise them to, "ask three, then ask me." Strategy #2: Turn and Talk One way to inspire active listening in your students is to give them a listening task. Strategy #3: Student Hand Signals Motivating Words

Design Thinking How to use Design Thinking as Educatorswww.designthinkingforeducators.com You can apply the 4C's:-Collaboration-Creativity-Critical thinking-Communication “Design has the power to enrich our lives by engaging our emotions through image, form, texture, color, sound, and smell. The intrinsically human-centered nature of design thinking points to the next step: we can use our empathy and understanding of people to design experiences that create opportunities for active engagement and participation.” The dumbest generation? No, Twitter is making kids smarter Part of an occasional series about the way digital culture affects the way we think, learn and live. Sara: Haha there was a weird comercial for computers that had flying sumo wrestlers John: Hahaha saweeeeet I’m still tryin to picture how that works Sarah: Haha yeah so am I this opening ceremony is so weird John: It must be Sarah K: Now there’s little kids doing karate This is a typical teenage text exchange captured by an academic. Add five hours or so a day spent online, where the most common activity is yet more typing away on social networks. This outpouring often produces an anguished outcry, particularly in September as kids head back to school and screen time starts competing with homework: Technology, pundits warn, is zombifying our young and wrecking their ability to communicate clearly. But is this actually “the dumbest generation”? In fact, there’s powerful evidence that digital tools are helping young people write and think far better than in the past. Literate? It hadn’t.

Project-Based Learning from Start to Finish via Edutopia For this installment of Schools That Work, we chose Manor New Technology High School, a public high school that is part of the New Tech Network of schools. Located just outside of Austin in Manor, Texas, it is an entirely project-based learning school that has consistently achieved outstanding results since opening. We followed a project there for three weeks to find out what makes their model so effective. By Mariko Nobori There is a small town, about 12 miles east of Austin, Texas, where a high school devoted to teaching every subject to every student through project-based learning (PBL) opened five years ago. Related What Makes Project-Based Learning a Success? At one high school in Texas, where every class in every grade is project based, the answer is devotion to a consistent process, belief in relationships, and commitment to relevance… Similar post Apps for Learning Series Gets Interactive In "Collaboration Fluency"

Stop trying to figure out if screentime is good for students You may have read the recent New York Times story No Child Left Untableted. Like others before it (Seeing no progress, some schools drop laptops), these stories have the wrong focus. They narrow in on the tool itself, and draw apocalyptic conclusions -- Technology May Be Destroying Children! Conducting device-focused research makes as little sense as doing research on pens, papers, folders, book-binding, and three-ring notebooks. To put it in perspective, think of it this way... We don’t research the effectiveness of paper in relation to learning to read…instead, we focus research on strategies that support reading i.e. phonicsWe don’t research the effectiveness of pens in relation to learning to write…instead, we focus research on strategies that support writing i.e. writers workshop What we need to do is scratch beneath the doom and gloom predictions of what these devices might mean to students. Unfortunately, we are not focusing on this. But is this what we’re talking about?

A Very Academic Problem The Teachers vs The Greeks Teachers: Please stop using the word ‘academic’. You don’t know what it means. What’s worse is that you perpetuate the problems in education every time you misuse the word. No doubt, the more alert among you will point me towards the dictionary to defend yourselves. We need to go back to the Greek root of the word if we are going to get to the hidden heart of it: Akademos comes from the Greek for “healing the people” as is most famously associated with ‘The Academy’ in Athens and some of the greatest minds in Western philosophy. So already, we have associations with healing, peace, tranquility, thinking, holistic growth and wisdom. Let’s look to The Academy for more: The Academy is most famously associated with Plato. The Academics of The Academy There was a strong tradition of skepticism and questioning.There was often no easy distinction between teacher and student.Knowledge was acquired primarily by means of the Socratic method. And so on… Postscript: Postscript

5 Powerful Questions Teachers Can Ask Students My first year teaching a literacy coach came to observe my classroom. After the students left, she commented on how I asked the whole class a question, would wait just a few seconds, and then answer it myself. "It's cute," she added. Um, I don't think she thought it was so cute. So that day, I learned about wait/think time. Many would agree that for inquiry to be alive and well in a classroom that, amongst other things, the teacher needs to be expert at asking strategic questions, and not only asking well-designed ones, but ones that will also lead students to questions of their own. Keeping It Simple I also learned over the years that asking straightforward, simply-worded questions can be just as effective as those intricate ones. #1. This question interrupts us from telling too much. #2. After students share what they think, this follow-up question pushes them to provide reasoning for their thinking. #3. #4. #5. How do you ask questions in your classroom?

Neil Gaiman: Why our future depends on libraries, reading and daydreaming It’s important for people to tell you what side they are on and why, and whether they might be biased. A declaration of members’ interests, of a sort. So, I am going to be talking to you about reading. And I am biased, obviously and enormously: I’m an author, often an author of fiction. So I’m biased as a writer. And I’m here giving this talk tonight, under the auspices of the Reading Agency: a charity whose mission is to give everyone an equal chance in life by helping people become confident and enthusiastic readers. And it’s that change, and that act of reading that I’m here to talk about tonight. I was once in New York, and I listened to a talk about the building of private prisons – a huge growth industry in America. It’s not one to one: you can’t say that a literate society has no criminality. And I think some of those correlations, the simplest, come from something very simple. Fiction has two uses. I don’t think there is such a thing as a bad book for children. It’s tosh.

Is It Time to Get Rid of Desks in the Classroom? The desk, like the chalkboard, has been a iconic symbol of the classroom. But the chalkboard has long since given way to interactive whiteboards, document cameras and projectors. For the most part, though, the school desk remains entrenched in the U.S. school system. Carl Hooker, director of instructional technology for the Eanes Independent School District, in Texas, wrote a mock obituary for the desk in a post on Edudemic: [I]t seemed like nothing could stop the proliferation of the standard Student Desk in our school systems until the dreaded 2010′s. Hooker writes that the poor Student Desk met its end after throwing itself into the “giant wood-chipper” behind the school. At an independent elementary school in Bloomfield Hills, Mich., elementary school teacher Erin Klein has taken the idea of a deskless classroom from fantasy to reality. A report from the MindShift Blog highlights what Klein did differently this school year: For this upcoming school year, Klein will ditch the desks.