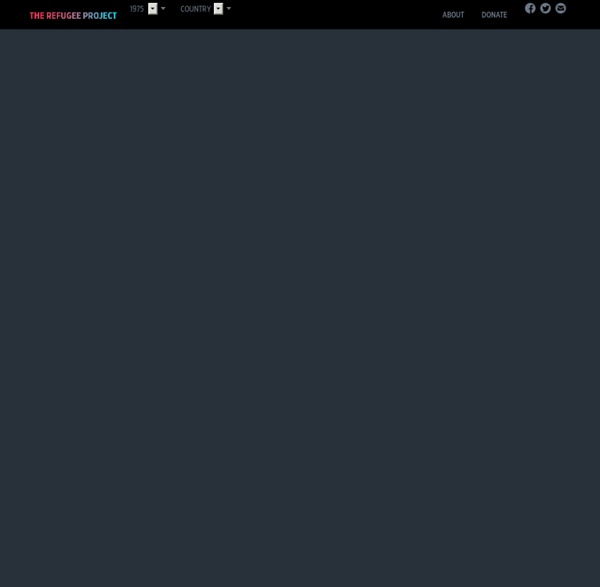 Tony's story - Refugee Council of Australia Actor, writer and director Tony Le Nguyen grew up in Can Tho, a city in southern Vietnam. His mother ran a small grocery store and his father was as a high school English teacher. During the Vietnam War, Tony’s father worked as an interpreter with the South Vietnamese army. Mapping Maps and Gaps: A Critical Digital Cartography of the ‘Mediterranean Refugee Crisis’ – Samuel Merrill Last month I attended the 2016 Digital Methods Initiative Winter School led by Richard Rogers and his team at the University of Amsterdam. Organised in the format of a data sprint the event saw participants attend a day of keynote talks presented by the likes of, among others, Lilie Chouliaraki, Mathieu Jacomy, Carolin Gerlitz and Rogers himself before turning their attention to a hands-on digital project for the remainder of the week. With the rather clever title of, Otherwise Engaged – Critical Analytics and the New Meanings of Engagement Online the Winter School set out to problematize online engagement and develop new methods by which to measure, visualise and interpret that engagement. Our pilot study compared the maps, images, locations and texts returned by Google searches for the queries ‘refugee routes’ and ‘migrant routes’ in seven languages: Arabic, English, French, Italian, Dutch, German and Spanish.

The Marauders Map I was watching Harry Potter and the Prisoner of Azkaban last night and it occurred to me that I still haven't seen a good interactive version of the Marauders Map. I had a couple of hours free this morning so I decided to give it a go. I'm not entirely happy with my Marauders Map but I thought I'd share it any way. I styled OpenStreetMap map tiles using Mapbox Studio. Calling Australia home: refugees share their stories Updated 24 Jun 2012, 2:19amSun 24 Jun 2012, 2:19am Australia has long provided refuge for those who have had to flee their home countries and prides itself on being a cultural mosaic, but for some the word 'refugee' conjures up a negative image. Many rights groups believe misinformation and the political debate on border protection is overshadowing the positive contributions refugees make to society.

National Museum of Australia Interactive New Homes (2.3mb) (requires Flash) Learn about two ‘displaced persons’ who migrated to Australia from Europe after World War II and make a museum exhibition about their stories. Here's Everyone Who's Immigrated to the U.S. Since 1820 From 1820 to 2013, 79 million people obtained lawful permanent resident status in the United States. The interactive map below visualizes all of them based on their prior country of residence. The brightness of a country corresponds to its total migration to the U.S. at the given time. Use the controls at the bottom to stop / resume the animation or to move back and forth in time. Two Centuries of U.S. Immigration (1 dot = 10,000 people)

The Agas Map Our new (as of the beginning of 2015) implementation of the Agas Map is based on the OpenLayers 3.0 library. It presents the map as a zoomable, rotatable tiled image with several hundred locations plotted on it. In the default view, the locations are initially hidden; you can show them by checking checkboxes in the navigation panel which appears at the top right of the map. Locations in the navigation panel are sorted into categories; click on a category name to expand it and see all the locations. Some locations appear in more than one category. Zoom in and out using the scroll wheel on your mouse, or the zoom control at the top left.

Family History – Begin your journey Researching family history is a favourite hobby for many people. The National Archives holds many records in which you might find information about your ancestors. This is the place to come if your family members served in the Australian armed forces or if they migrated to Australia during the 20th century.

International Organization for Migration The GLOBAL MIGRATION FLOWS interactive app tracks migrants around the world. This application is now being hosted by IOM.int. It is endlessly fascinating to explore where we're from. The underlying data for the map was published by the UN DESA in 2015. Using the app: Choose whether you want to access information about migrants leaving a country (Outward) or migrants entering a country (Inward). Free mapping data will elevate flood risk knowledge For the past 17 years we have been capturing LIDAR (Light Detection & Ranging) data in England. LIDAR uses a laser to scan and map the landscape from above and is widely considered to be the best method for collecting very dense and accurate elevation data across the landscape. We use LIDAR to help the work of the Environment Agency in many ways, including creating flood models, assessing coastal change and analysing how land is used.