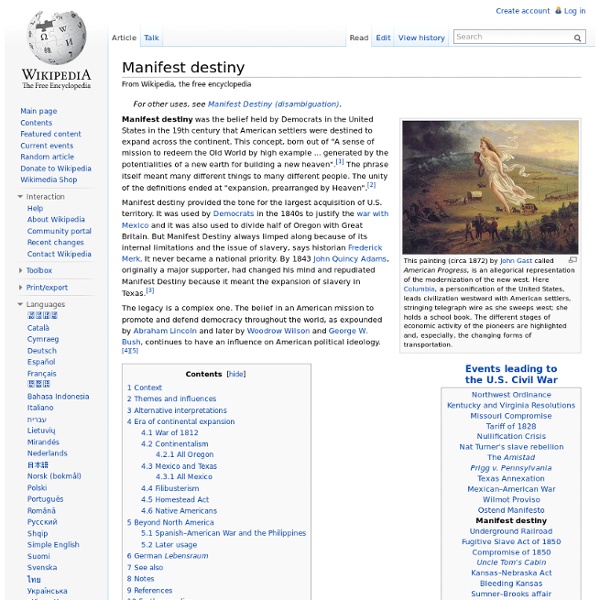 In the 19th century, Manifest Destiny was the widely held belief in the United States that American settlers were destined to expand throughout the continent. Historians have for the most part agreed that there are three basic themes to Manifest Destiny: The special virtues of the American people and their institutions;America's mission to redeem and remake the west in the image of agrarian America;An irresistible destiny to accomplish this essential duty.[1] Historian Frederick Merk says this concept was born out of "A sense of mission to redeem the Old World by high example [...] generated by the potentialities of a new earth for building a new heaven".[2] Merk concludes: From the outset Manifest Destiny—vast in program, in its sense of continentalism—was slight in support. Context[edit] Manifest Destiny was always a general circular notion rather than a specific policy. Yet Jackson would not be the only president to elaborate on the principles underlying manifest destiny. John L. Related:  christofvanwyk

Designs for Working Why your bosses want to turn your new office into Greenwich Village. In the early nineteen-sixties, Jane Jacobs lived on Hudson Street, in Greenwich Village, near the intersection of Eighth Avenue and Bleecker Street. It was then, as now, a charming district of nineteenth-century tenements and town houses, bars and shops, laid out over an irregular grid, and Jacobs loved the neighborhood. In her 1961 masterpiece, “The Death and Life of Great American Cities,” she rhapsodized about the White Horse Tavern down the block, home to Irish longshoremen and writers and intellectuals–a place where, on a winter’s night, as “the doors open, a solid wave of conversation and animation surges out and hits you.” The miracle of Hudson Street, according to Jacobs, was created by the particular configuration of the streets and buildings of the neighborhood. Jane Jacobs did not win the battle she set out to fight. The parallels between neighborhoods and offices are striking.

American Thinker: Progressivism and the Dissolution of Boundaries The genie is out of the bottle, and has been for some time. Unfortunately, this genie has bestowed more curses than gifts upon mankind. The genie I am referring to goes by many names: liberalism, progressivism, idealism, secularism -- call it what you will, but the end game has been the degradation of morality, the trampling of traditional values, the destruction of the nuclear family, and the annihilation of our economy. Student Apathy Classroom teachers regularly report that their students are disrespectful, rude, and disengaged. Infanticide While reasonable and rational people can differ on reproductive rights, and even some conservatives can agree there are valid reasons for some abortions, the practice of partial-birth abortion is an abomination of the highest order. Scientific Historicism Social Darwinism Voter Disenfranchisement This rich history of deception and degradation rolls on in to present times, and has manifested itself, ironically, as voter intimidation.

Libyan Civil War (2014–present) Background of discontent with General National Congress At the beginning of 2014, Libya was governed by the General National Congress (GNC), which won the popular vote in 2012 elections.The GNC had become the subject of considerable discontent for, among other things. The GNC lost credibility as a result of having overstepped its mandate on the one hand, and accomplished little on the other. The GNC was made of two major political groupings, the National Forces Alliance (NFC) and the Justice and Construction Party (JCP). Political Fragmentation of the GNC GNC establishes the Libya Revolutionaries Operations Room (LROR) Kidnapping of Prime Minister Zeidan The kidnapping of Zeidan was believed to be a coup attempt supported by members of the GNC, who was viewed as too moderate (see: 2013 Libyan coup d'état attempt). Expansion of armed groups during the GNC's term Many Libyans blamed the GNC and the interim government for a continued lack of security in the country. Opposing forces Taking sides

Rebus Allusional device that uses pictures to represent words or parts of words A rebus-style "escort card" from around 1865, to be read as "May I see you home my dear?" A German rebus, circa 1620 A rebus () is a puzzle device which combines the use of illustrated pictures with individual letters to depict words and/or phrases. For example: the word "been" might be depicted by a rebus showing an illustrated bumblebee next to a plus sign (+) and the letter "n". The composition alludes to the name, profession or personal characteristics of the bearer, and speaks to the beholder Non verbis, sed rebus, which Latin expression signifies "not by words but by things"[1] (res, rei (f), a thing, object, matter; rebus being ablative plural).[2] Rebuses within heraldry[edit] Modern rebuses, word plays[edit] A modern example of the rebus used as a form of word play is: = Hear, or Here. p walk ark: walk in the park. Pictograms[edit] Rebus principle[edit] Use in game shows[edit] Canada United Kingdom United States India

Why Orthodox Jews are Opposed to the Zionist State The People of Israel oppose the so-called "State of Israel" for four reasons: FIRST -- The so-called "State of Israel" is diametrically opposed and completely contradictory to the true essence and foundation of the People of Israel, as is explained above. The only time that the People of Israel were permitted to have a state was two thousand years ago when the glory of the creator was upon us, and likewise in the future when the glory of the creator will once more be revealed, and the whole world will serve Him, then He Himself (without any human effort or force of arms) will grant us a kingdom founded on Divine Service. However, a worldly state, like those possessed by other peoples, is contradictory to the true essence of the People of Israel. SECOND -- Because of all of this and other reasons the Torah forbids us to end the exile and establish a state and army until the Holy One, blessed He, in His Glory and Essence will redeem us. Zionism will not replace the Jewish People.

Ukrainian crisis A prolonged crisis in Ukraine began on 21 November 2013, when then-president Viktor Yanukovych suspended preparations for the implementation of an association agreement with the European Union. This decision resulted in mass protests by its opponents, known as the "Euromaidan". After months of such protests, Yanukovych was ousted by the protesters on 22 February 2014, when he fled the Ukrainian capital city of Kiev. Euromaidan and revolution[edit] Ukraine became gripped by unrest when President Viktor Yanukovych refused to sign an association agreement with the European Union on 21 November 2013.[1] An organised political movement known as 'Euromaidan' demanded closer ties with the European Union, and the ousting of Yanukovych.[2] This movement was ultimately successful, culminating in the February 2014 revolution, which removed Yanukovych and his government.[3] Post-revolution unrest[edit] Russian annexation of Crimea[edit] War in Donbass[edit] Elections in Ukraine[edit] References[edit]

Theory of mind Zionism Theodor Herzl is considered the founder of the Zionist movement. In his 1896 book Der Judenstaat, he envisioned the founding of a future independent Jewish state during the 20th century. Zionism (Hebrew: צִיּוֹנוּת, translit. Defenders of Zionism say it is a national liberation movement for the repatriation of a dispersed socio-religious group to what they see as an abandoned homeland millennia before.[5][6][7] Critics of Zionism see it as a colonialist[8] or racist[9] ideology that led to the denial of rights, dispossession and expulsion of the "indigenous population of Palestine".[10][11][12][13] Overview Although initially one of several Jewish political movements offering alternative responses to assimilation and antisemitism, Zionism grew rapidly and became the dominant force in Jewish politics with the destruction of Jewish life in Central and Eastern Europe where these alternative movements were rooted. Zionism also sought assimilation into the modern world. Terminology Organization

Dig Deeper into the Scandal Globally, extreme poverty has been halved in 20 years, and could be virtually wiped out by 2030. But much of the progress that has been made is at risk – not because of natural disasters or new diseases, but because of something far more insidious. Analysis by the ONE Campaign suggests that at least $1 trillion is being taken out of developing countries each year through a web of corrupt activity that involves shady deals for natural resources, the use of anonymous shell companies, money laundering and illegal tax evasion. This is not international aid – which is making a tangible difference. Massive sums are being taken out of developing countries’ own economies, preventing them from financing their own fight against extreme poverty, disease and hunger. In this report, we show the true human cost of this scandal, and how it can be dramatically reduced. The central problem with corruption is corrupt people, living in both developed and developing countries.

Unilateralism Unilateralism is any doctrine or agenda that supports one-sided action. Such action may be in disregard for other parties, or as an expression of a commitment toward a direction which other parties may find agreeable. Unilateralism is a neologism which is already in common use; it was coined to be an antonym for multilateralism, which is the doctrine which asserts the benefits of participation from as many parties as possible. The two terms together can refer to differences in foreign policy approached to international problems. When agreement by multiple parties is absolutely required—for example, in the context of international trade policies—bilateral agreements (involving two participants at a time) are usually preferred by proponents of unilateralism. Unilateralism may be preferred in those instances when it's assumed to be the most efficient, i.e., in issues that can be solved without cooperation. Unilateralism by country[edit] United Kingdom[edit] United States[edit] References[edit]