Project for the New American Century 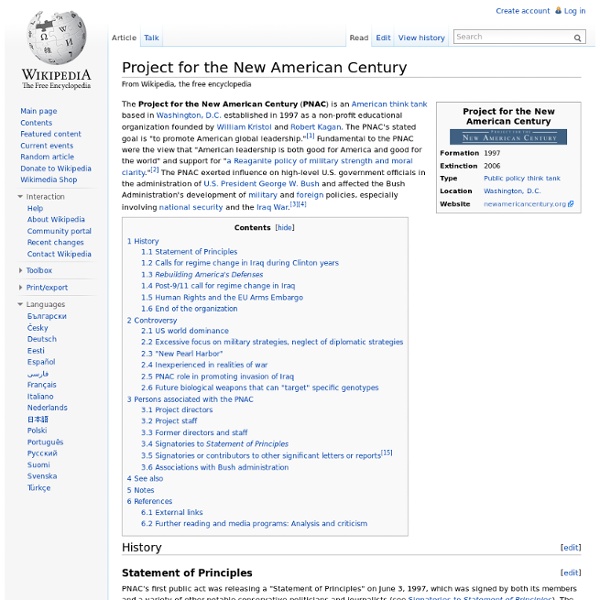 The Project for the New American Century (PNAC) was an American think tank based in Washington, D.C. established in 1997 as a non-profit educational organization founded by William Kristol and Robert Kagan. The PNAC's stated goal is "to promote American global leadership."[1] Fundamental to the PNAC were the view that "American leadership is both good for America and good for the world" and support for "a Reaganite policy of military strength and moral clarity History[edit] Statement of Principles[edit] PNAC's first public act was releasing a "Statement of Principles" on June 3, 1997, which was signed by both its members and a variety of other notable conservative politicians and journalists (see Signatories to Statement of Principles). As the 20th century draws to a close, the United States stands as the world's pre-eminent power. Calls for regime change in Iraq during Clinton years[edit] Rebuilding America's Defenses[edit] The report argues: and that It specifies the following goals:

SCHOPENHAUER'S 38 STRATAGEMS, OR 38 WAYS TO WIN AN ARGUMENT Arthur Schopenhauer (1788-1860), was a brilliant German philosopher. These 38 Stratagems are excerpts from "The Art of Controversy", first translated into English and published in 1896. Carry your opponent's proposition beyond its natural limits; exaggerate it. The more general your opponent's statement becomes, the more objections you can find against it. (abstracted from the book:Numerical Lists You Never Knew or Once Knew and Probably Forget, by: John Boswell and Dan Starer) Robert Kagan Robert Kagan (born September 26, 1958 in Athens, Greece) is an American historian, author, columnist, and foreign policy commentator at the Brookings Institution. A co-founder of the Project for the New American Century,[1][2] Kagan is a senior fellow at the Brookings Institution and a member of the Council on Foreign Relations.[3] He been a foreign policy advisor to several U.S. Republican presidential candidates as well as to Hillary Clinton, when she was Secretary of State under President Obama. Personal life and education[edit] Robert Kagan is the son of Donald Kagan, Sterling Professor of Classics and History at Yale University and a specialist in the history of the Peloponnesian War. Ideas and career[edit] Kagan also serves on the State Department's Foreign Affairs Policy Board,[16] originally under Secretary of State Hillary Clinton.[17] He is also a member of the board of directors for The Foreign Policy Initiative (FPI).[18] Writings[edit] Select bibliography[edit] Notes[edit]

Syria: Proxy war, not civil war More than 4 years have passed since the Syrian people took to the streets demanding freedom, dignity, and social justice- simply their basic human rights. The regime's response towards the uprising has been incomprehensible and horrific, and to date has resulted in the killing of more than 200 thousand human lives, the displacement of more than 8 million, and the destruction of the country's history and infrastructure. It is undeniable that the conflict in Syria has escalated to a war; a war, however, that is not a civil war nor one driven by the Syrians. Months after the revolution sparked, the government's only reaction was to kill and detain protesters, promoting the motto of "Assad forever". As a result of the regime violence and ongoing conflict in Syria, several regional and international powers were compelled to intervene, directly and indirectly. Iran-Hezbollah vs GCC, US Iran has provided many reasons to explain its alignment with the Ba'athist regime in Syria. Russia vs US

Unexplained Mysteries, Jani Mysteries Unexplained. Unexplained Mysteries. No Food or Fluids for 65 Years "I feel no need for food and water," states Prahlad Jani, a seventy-six year old Indian ascetic who lives in a cave near the Ambaji temple in the state of Gujarat. Mr. In November 2003, after over a year of coaxing, Prahlad Jani was finally persuaded to participate in a scientific research study. Prahlad Jani was initially kept in ICU for the first twenty-four hours. To assure researchers of no possible intake of water, Prahlad Jani agreed he would not bathe during the medical investigation. At the end of the ten days of observation, the team of doctors verified that Prahlad Jani had not taken food or drank fluids. The following are excerpts from the research team's concluding report: 1. Dr. Another similar research study, also headed by Dr. || Back || To Chapter 6 Website Content © 2004 by Vincent J.

Military–industrial–media complex The military–industrial–media complex is an offshoot of the military–industrial complex. Organizations like Fairness and Accuracy in Reporting have accused the military industrial media complex of using their media resources to promote militarism, which, according to Fairness and Accuracy in Reporting's hypothesis, benefits the defense resources of the company. General Electric (which owns, but is in the process of divesting, 49% of NBC) is a subcontractor for the Tomahawk cruise missile and Patriot II missile both of which were used extensively during the Persian Gulf War.[1] General Electric also manufactures components for the B-2 stealth bomber and B-52 bomber and the E-3 AWACS aircraft which were also used extensively during the conflict. See also[edit] References[edit] Further reading[edit] Dadge, David; Danny Schechter (2006).

How COINTELPRO really works and destroys social movements: Open letter from former Tea Partier to Occupy Wall Street protesters I don't expect you to believe me. I want you to read this, take it with a grain of salt, and do the research yourself. You may not believe me, but I want your movement to succeed. From a former tea partier to you, young new rebels, there's some advice to prevent what happened to our now broken movement from happening to you. I wish I could believe this Occupy Wall Street was still about (r)Evolution, but so far, all I am seeing is a painful rehash of how the government turned the pre-Presidential election tea party movement into the joke it is now. I am sharing these observations, so you guys know what's going on and can prevent the media from succeeding in painting you as violent slacker hippies rebelling without a cause, or from having the movement be hijacked by a bunch of corporatists seeking to twist the movement's original intentions. 3-The media will cover the movement only after this infiltration succeeds. 2- Be image conscious. 5- Remain independent and focused.

Victoria Nuland Victoria Jane Nuland (born 1961) is the Assistant Secretary of State for European and Eurasian Affairs at the United States Department of State.[1] Early life and education[edit] Nuland is the daughter of Yale bioethics and medicine professor Sherwin B. Nuland, whose original surname was Nudelman. In her father Dr. Career[edit] Nuland is a career Senior Officer of the United States Foreign Service and has worked for both Democratic and Republican administrations. Assistant Secretary[edit] She was nominated to serve as Assistant Secretary of State for European and Eurasian Affairs in May 2013 and sworn in to fill that role in September 2013.[4] Controversy[edit] 2012 Benghazi attack[edit] Nuland has emerged as one of the key figures who have been accused by various sources of initiating a cover up of the 2012 Benghazi attack. 2013 Nuland distributes cookies to protestors in Kiev[edit] In December 2013 Nuland distributed cookies to protestors in Kiev's Maidan Square. Notes[edit] References[edit]

Serj Tankian - 17 seconds of territorial incursion into... Alternative News Pentagon military analyst program A page from one of the weekly public affairs briefings distributed from defendamerica.mil in May 2003 The Pentagon military analyst program was an information operation of the U.S. Department of Defense (DoD) that was launched in early 2002 by then-Assistant Secretary of Defense for Public Affairs Victoria Clarke.[1] The goal of the operation is "to spread the administrations's talking points on Iraq by briefing retired commanders for network and cable television appearances," where they have been presented as independent analysts;[2] Bryan Whitman, a Pentagon spokesman, said the Pentagon's intent is to keep the American people informed about the so-called War on Terrorism by providing prominent military analysts with factual information and frequent, direct access to key military officials.[3][4] The Times article suggests that the analysts had undisclosed financial conflicts of interest and were given special access as a reward for promoting the administration's point of view.

Universal Mind article - part 2 - Parapsychology articles and blog Universal Mind is known in the literature by many names. Some call it the Collective Subconcious , Psi-field , Global mind , Cosmic mind , Space-Time Unit(STU) , the Akashic records . All these names refer to something that a person can ‘connect’ to in order to receive information that cannot be reached in any known way. The information can be virtually anything, related to any person at any place and time. It is possible to see other places (Remote Viewing), to see events in the lives of people, diagnose health problem from a distance and more. I have seen distance diagnosing either using visualization or using biolocation technique. How can the information be accessed? Of course, this is the most intriguing question. For example, you suddenly remembered that you forgot something at a friends house that you left 10 minutes ago, and seconds later you receive a call from him where he tells exactly what you recalled just moment ago. Links: Info on Akashic Records